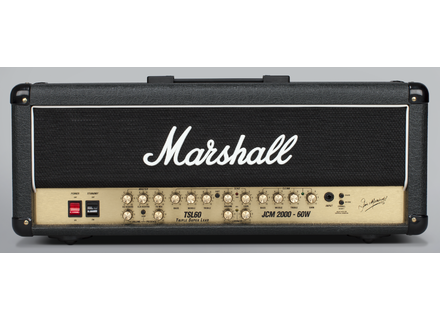 frank-abagnale's review (This content has been automatically translated from French)

Marshall TSL60
4
Head amp has power and lights 2lampes 4ou5 the preamp.
60w
3 Channel, clear, crunch, distortion (+ reverb)
sold with 5 positions pdalier clean, crunch, lead, reverb, fx
An equalization on the clean channel and lead channel. But the good of equ rglages are very few fine c sometimes to wonder what they are used for the lead channel (c marshall the low end)

Usage is rather simple gnral, we get easily what is expected. Getting started is fast and the comprhension of the head.
Bad point for footswith: after several years of use, push buttons most utiliss (like clean and lead) get damaged and break inside a level of connectivity.
This is not a switch indestructible (unlike mesa) which is really an important point when we bcp scene. Just imagine that you are in your switch is running and in full concert pete ........ I'll let you imagine the rest. For j'aprecie against the reverb on the button footswitch to turn reverb or remove (which are very practical in concert).

Clean: no real purpose ...... very marshall, I am not wicked but the sound is little clear purpose and a tiring listen arptition.

Crunch: bof also very straight forward by just playing against one of the pots are slightly scratched find a nice crunch.

Lead: ............ ca soft snores, made bzzz ca, ca breath is not really own all this against a 60w by ca pretty hard, lots of power big heavy distortion , but the sound is fairly dgueular, g c the impression that a marshall clean enough in the low end to sound dgueu. Anyway I stop dnigrer marshall sound or I'm going to slap on the wrist.
I use a gibson les paul studio, a fender mex pickups back with an American and cort m600.

Originally it belongs to a very good friend guitarist who was kind enough to lend me a trial for several months. Objectives remain, for the price it was a big sound to the lights marshall ca is not bad at all despite the distortion too dgueu for my taste.
I could compare it with: engl (fireball), mesa boogie (dualrecto), Hugh & Kettner (triamp mk2)
These are of course well above sounds, sounds engl approach quite a h & k (the two German brands) The distos much cleaner with virtually no wind and feedback. The boogie is certainly incomparrable at the cutting edge and personality distortion and The definition of clear sound.
But the rest TSL60 for small grants, I think, a good compromise''large''has its lamps.

pierro-6's review (This content has been automatically translated from French)

Marshall TSL60
5
All Tube Amp (2 in the Tagus power, 4 in preamp)
60watts.
complete connection.
nothing wrong.

It is on this amp 2eq, one for its clean,
and saturated for both channels. Obviously good,
c 'is the marshall, that is not fully effective
even if when all the knobs are zero,
the sound is almost instantly. the sound is good with
time and power, so the more you let the heat,
and the more you push the Tagus power
plus the sound is good. loop effect is ruined, with
a volume switch, even if personal, I would not use it
intensively.
The manual is clear, we just do not
bullshit aprsl have read ...

In sound, he dbrouille rather well,
even if for big sounds typs neo, trash etc.
c is not a Lumire. clean is the strong point
of the head, and crystal-clear prcis (without ECSS when
Similarly, c is not a twin). added to it without problem
effects without losing the grain CHARACTERISTICS.
(Oddly, that is the channel that I prfre, jlai
But bought from the perspective of its two channels saturated)
the channel is nice crunch dsl moment that we
Exceeds no 3 / 4 o gain, beyond, that is a bit messy
my taste.
the lead channel sends STRID, a lot of gain, but
attention, he's blowing the guy.
the sound is big, feed with a les paul, that is the top.
as mentioned above, large heavy saturation, that is not
for him, but with good pedals ...
to complete the two reverbs are effective without default.
I use it with a strat us, soon a special sg,
and my boss me-50.
the grain is typical, we like it or not,
me I have chosen my camp.
ps: watch out for lamps preamp! replace those original
by ei, or Sovtek, you will see your exact ...

I have 1 month,
and I 'm fully satisfied.
Plai for me the most is that even low volume,
the sound is good, which is rather rare in
all lamps. I couple a baffle 1936.
I have tried many before MODELS, (beginners to
I left for the dsl401 ...) the tsl601, tsl602,
peavey classic 50, mesa f30 and f50, single-sided ...
I have chosen for its affordability and its
eclectic. with a little more sorrel, he
The series even when prferera mesa correct, or
good JCM800.
budjet for the same I would do this choice, if I 'would go see
in Mesa or VHT ...

Marshall TSL60 manuals and other files