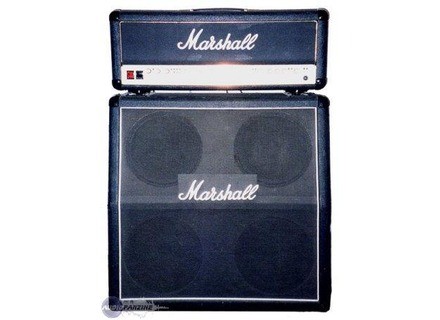 I've owned this beauty for years, I payed almost nothing for it and I haven't written a review about it yet!
I have the 1992 blue version with gold logo and EL34 power tubes. It feeds a cabinet with 50-watt Jensen speakers.

I fitted the preamp channels with a mix of several 12AX7 (Golden Dragon, JJ and sometimes EH).
I recently equipped the power stage with Harma E34L-STR (cryo). It's mind-blowing!

Small con: It isn't possible to switch between channel B modes... It's really a pity because each of these 3 modes has its own tonal character and sounds amazing.

It's so versatile that you'll need some time to get to know it.
And you'll have to read the user's manual carefully if you want to understand this beast.
You have a lot of parameters to fine-tune your sound thanks to the Midi control, channel voicings, tube interaction, etc.

But once you understood everything it isn't that difficult.

I play in a rock/metal band. You could say that I'm the rock soul of the band while the other guitarist provides the heavy (metal) touch with his Mesa.
Whatever the music style this amp perfectly fits the bill with a Marshall-like character. If you want a Mesa sound, buy a Mesa.
But if you like the real British rock sound, this amp head is for you.
FYI I use it mainly with a Gibson Nighthawk Custom and sometimes with a Tele 52 :o)

Channel 1: Everybody is crazy about this channel and that's for a darn good reason. For once you get a good clean sound with a Marshall.

Channel 3: It sounds like a boosted JCM900. This channel can be used for soloing as complement for channel 2. I use it for heavily distorted parts.

I've been using it for 10 years now.
The electronics of this amp head are somewhat fragile. I had some voltage problems which resulted in several burnt resistors. Since then I connect it only to secure AC power lines (not to the power lines feeding the lights!!) (those of you who play regularly on stage know what I mean...)
But I won't give this amp away, all the less when it's price is increasing.
Did you find this review helpful?yesno
»

lemmer007's review (This content has been automatically translated from French)

midi in (one of the best systems on twelve o'clock amps) of true plug and play ... possibility to connect 2 speakers ... effects send / return, footswitch .....

suite has a master section -> Volume (poweramp), presence and effects

with this amp still produces a good sound ...

clean channel: you can get a sound of a JTM45 to the warm sound of a Super Lead
crunch channel: one can get his first JTM 45 or sound jcm between 800 and 1959 Super Lead, and its purist jcm 900 ...
channel distortion: a very good typical distortion jcm 900 has pushed background ...

and it is still doing lots of things with ...

the manual is super easy ...

I play this amp with a Fender Stratocaster, Fender and Ibanez RG TV with effects Rocktron replifex and 4x12 cab marshall with 4 Celestion greenbacks to ...

clean the lens is really one of the best clean sounds I find in marshall ...
the rest pte too ..

I love all the sounds on this model because there are vintage sounds and more modern sounds ... it really 10 marshalls one

oh yes I tried very many amps ... I'm really taken me a long time to find and finally I found

oh yes I Refer this choice that price .....
Did you find this review helpful?yesno
»

Marshall 6100
Everything has been said above, 100W 3 channel equalization independently mounted EL34.

The connection is really complete amplifier early 90'S, I particularly appreciate the ability to switch from 100W to 50W to 25W and even though I leave all the time on what is already 50W ... very strong.

Damping system for control of HP, I leave on auto.

I have not tested the effects loop, so I will not comment in that regard.
Finally overall I put 9 because it is very comprehensive!

The setup is simple: yes and no, I said, was in front adjustment knobs channel 3, so far everything is normal ... but in the back there there's a plethora of small switch .. . and those controlling the effects loop bypass the power section.
Result: a few scares me because it has happened several times to plug my amp, and then press the button ON the standby button and ... nothing! I therefore turn to the connection, pedals, sweat begins to bead on my forehead as I see by the price that the technician will ask me for a transformer that has the grill or whatever. In fact, nothing to panic, just look at the back of the beast and press the small switch guilty.

For once on a Marshall, the equalizer works well and is more reactive with respect to the manual once it is worth the download site for the Marshall power config (100W/50W/25W) is a uncomplicated it is better to read the manual.
Overall 8.

1 channel: clear sound, very respectable, better than a Mesa Single Rectifier, not as dynamic a good Fender. I'm using that for rhythmic funk

The second channel: crunch tones, mode A JTM45 I do not use it because I think it lacks punch! Plexi mode B: then ... a little gem I had for a while a JMP 2204 of 1978 which was truly sublime but somewhat limited, mode B 6100 looks like two drops of water in JMP! Mode C is on the ground of a JCM800 pretty tough, it sounds divinely can even be used as a second lead as the gain goes far enough. only downside we can not change modes via footswitch, what a pity!

The third channel: the lead, a marvel as the gain goes far enough, it is not in the metal but it can do much good big rock nag! Note 2 small switch on the front that can shape the sound of digging and other mediums.

I put 9 (-1 unable to switch modes via footswitch channel 2) even if it is not very objective, but I love it!

I use it and repet concerts for 1.5 years, I tried the amp that suited me for a while know that sometimes it is just a matter of guts we like it or not, so I had a Marshall JMP 2204 (but why I sold what idiot!) which was absolutely killing but I found a bit limited, so I went to Mesa Single Rectifier: Total bursts on channel 2 modern but clean and crunch flat and no interest for my taste ... I tried an Orange AD30T: look great, a nice sound, but in the long run I do not have the thunderbolt!
And finally I came across this 6100 that I was eyeing for a while, again this is subjective but it includes everything I was looking for in an amp at least 2 channels, marshall sound because it is what I 'like a crunch which almost equals my JMP2204 and pushed lead to JCM800 block!

What's weird is that it is not frankly acclaimed as yet it is one of the best amp Marshall have designed, I put 9!

Nigel's review (This content has been automatically translated from French)

Question the rear panel connector is really well designed with the possibility of split power of the head but also to be able to focntionner lamps in 2 different modes which also have an impact on power. So you can choose between 100w, 50w or 25w altogether knowing that it's suffered quite a bit when a few lamps in particular.

It may also affect the damping manually or auto which runs the HP wisely in focntion Inrush channel.

The head is midday and offers a solid footswitch three pods set well apart. No reverb is no bypass.

Two LEDs of the fuses control (damn good) that can realize Rapidos if there is a trick naz on that side.

Side effects loop is really great, you can choose the method / / or in series. There are two knobs that adjust the Nuveau output on channels 1 and 2 and a general boost.

Two speaker output with the full range of inpédences 4.8 or 16 ohms.

On the front you can adjust the EQ for each channel with extreme precision (perhaps too) and switch to enable each to obtain résutlats a very different system modes. For the lead we can have a contour treatment that digs the middle and a boost. For the three modes crunch can work close to a JMT45 to have a bit more bite and tear at any outright have almost a second lead. For cleanon alters the brightness and the presence of middles.

Operation is extremely simple but requires a bit of time when as the sound possibilities are important, but power is a bit redundant and unless you have a powerbreack you have to play hard to be in perfect rendmeent of the beast. Inherent characteristics of all the big heads 100w.

We find very quickly a good sound "basic" and above can easily integrate its effects and have a level balance between channels.

So with a minimum amount of time we manage to tame it if it is not too demanding (like me ...), The ppotards not, as usual in Marshall, a stroke / its enormous impact on the c ' is a pity. So finally it is always in the same waters.

Having long played a TSL 100, I consider it very material above the standard range in the Marshall hear. Its versatility is unexpected for a Marshall head with a particularly clear sound providing a sound basis for quality effects. No drive that goes into it to scratch even with high output.

I found the TSL a little short in distortion and it's really more convincing but not yet here for me. Playing weaker (100w mode) I get better results than before. Question crunch of its range is the largest of three channels with shades simply ... good!

Finally I played in a record time in pop-rock, prog rock with essentially a Start and Flying V and a cabinet 2x12 "celestion home-made, I was quite happy but not as happy as I would have ... believed that the "very good" in the category "average" range in terms of amp ... cheap but benefit = cons = hard to find in good condition and lourdingos transport.

It should be like the biensur grainMarshall and have what it takes to transbahuter crazy stuff all at arm's length but I think one of the very best minds with the signature Slash. This stuff here is the way to small purse. It is enough terrain for very different styles and respects the EQ quite well and the personality of the instrument.

Perhaps it is a good option for tight budget and amateur big head 100W which Deriche all.

Marshall 6100 manuals and other files