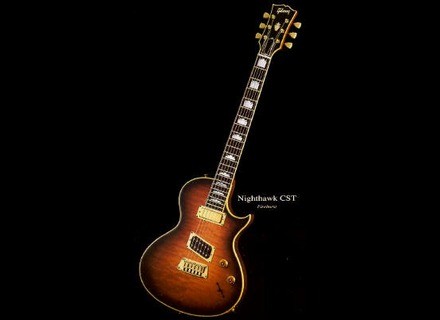 Nighthawk Custom, Other Shape Guitar from Gibson in the Nighthawk (1993-1999) series.

Gibson Nighthawk Custom
5
I saw this guitar at a local music store, Silverlake Guitars while browsing. I played it through an old Fender Super Reverb, and it really sounded great. The price seemed a bit steep, at $650, but I decided to get it anyway since I wanted that particular axe.

First impression, it looks great! It's a translucent red with a very pretty wood grain underneath. It has a very sleek style and the gold hardware is very classy. I like having just the two knobs for volume and tone, rather than four like on my LP. The five way switch makes it easy to get such a wide variety of tones that this guitar really is a jack of all trades. I don't think this guitar has enough grind for Metal, but it will give you all you want and then some for rock. Split the coils on the neck pu and you get an awesome clean sound. This guitar has a thinner than usual body for a Gibson, making it also fairly light... A big plus two hours into your show.

I am a bit worried about the top strap button as it is set at a little of an angle. That seems to create the risk of the guitar falling. The bridge pickup is good, but if it had just a bit more gain this guitar could do anything.

It's a good quality axe. It feels solidly contrstructed, though I haven't had it for long. It's definately a flawless assemby and finish. I like the location of the controls too.

This is a really good guitar for Rock and Blues. I am sure its good for other stuff, but that's what I know. B+ for style. A for versatility. A- for design. and A+ for quality.

The most versatile guitar I've ever played. Can sound like a Telecaster to a Les Paul and everything in between. Also is a very fast playing guitar and comfortable to wear unlike a Les Paul

It could be a little more attractive.

If I could only have one guitar, this would be it.

fabsqueak's review (This content has been automatically translated from French)

The models Spcial, Standard, Custom, and do not have exactly the same characteristics.
The button for the Custom and bne. Rosewood for the other two.
or of the heat and the precision of the custom, the difference has to bite her sisters.

Voodoo10's review (This content has been automatically translated from French)

Gibson Nighthawk Custom
5
U.S. model,
Table flamed red (very rare): o)
Otherwise it's the same characteristics as the standards are:
Mahogany neck and body, a flamed maple top and ebony fingerboard. but with a little more: mother of pearl inlays on the handle: o)
Honestly though she slams.

Handle: type gibson nice, so pretty flat on the keys and thin (like a Lespaul but less wide). Touch is good, we are dealing with a gibson.

Weight: lightweight guitar! Frankly, it's a treat to play with comfort. You can play for hours ...

And this guitar is versatility at all levels.

I play the neo-rock: Rock Péchu enough with metal parts. It is plugged into a Marshall 30th head: it sounds very rock results. She is more than enough distortion level when the bridge humbucker is selected.
Sure, it's the most "Fenderienne" of Gibson. The neck pickup is approaching such a telecaster ... I said approaching (I also have a tele52). But let's be honest, this guitar is a killer level versatility.

I did not know this series of Gibson until I see the guitarist play on Eiffel. Plugged into a marshall it clear accumulation and brilliance made me tilt ...

I use it for 4 years now ... no regrets. It is so much more interesting than SG or Lespaul, it is no doubt.
One has only to read the reviews on the net on this series, unfortunately (and fortunately for us owners: o)) no longer manufactured. All opinions are unanimous in saying that is probably one of Gibson's most successful. Purists can still criticize his side Fender, which probably caused his downfall.

In all if you find one used, you throw it, especially as its coast is very reasonable. Frankly, between paying a gibson SG new instance (no interest level quality / price) and a nighthawk secondhand ... I'll let you guess the winner.