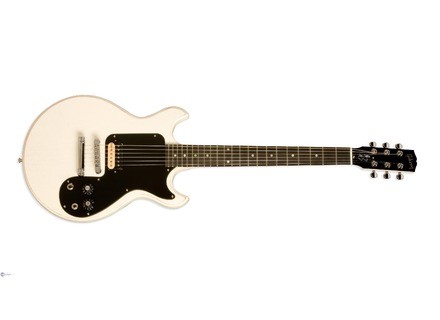 Gibson Joan Jett Signature Melody Maker
3
Joan Jett is the frontlady for the band the Blackhearts. They are a pretty simple band with simple music. So she has a rugged guitar to throw out all her riffs on. The body is a modified double cut melody maker. The body is a bit thinner than usual for lightness. It has a set mahogany neck and the neck is a slim 60s profile neck. The finish on the guitar is a faded type Gibson finish so the neck is very smooth and fast. The fretboard is ebony and has a 12 inch radius with 22 jumbo frets. The tuners up top are mini Grover tuners. The bridge is your standard tune-o-matic setup. The controls are a bit unusual for a single pickup guitar. You get one pickup but the switch on the body is a kill switch. There are volume and tone knobs as well.

This guitar has a pretty fast feel for a Gibson in some says but in some other ways it does not feel fast. The satin finish gives a smoother feel to the finish but the neck profile itself is not super fast. The guitar is lightweight and comfortable. The neck is not to big as you would imagine being designed for a woman. The neck radius is not super flat though it is more set up for rhythm playing. This is what I mean when I say it is kinda fast but isnt. The kill switch is a pretty cool touch since it just has one pickup. A hot pickup like this may provide some unwanted feedback and turning on the kill switch when you are not playing and prevent this when playing live. The jack is mounted flat on the body on the pickguard which I do not like. Playing live with a guitar like this one errant tug on your cable and you can crack your pickguard since the jack is perpendicular to it. It is better when the cable faces downwards towards the ground where a pull will just pull it out completely instead of pulling it sideways and putting stress on your pickguard. It is pretty silly that simple things like this are still done on guitars. Its like the people designing them do not play guitar.

This guitar is as close to a one trick pony as you can get without fully being one. This guitar is not a singing lead machine. This guitar is at its best when it is cranking out thick powerchords. This guitar has a burstbucker 3 pickup which I am normally not a fan of but it fits well in this guitar. With this guitar you are not really going for smooth warm sounds you are more going to gritty distortion. The distorted tone offered punch, thickness, and clarity, and it was a nice mix of rumbling lows and singing highs that really cut through without being too harsh. The humbucker had plenty of crunch and sustain, making the guitar great for aggressive rhythm playing in punk, hard rock, or heavy metal.Since there is no neck pickup or coil tap or anything this guitar is a one tone tool pretty much. You can sorta get a neck pickup tone if you roll off all the tone but the design of the guitar is still limiting.

These are one of those signature guitars where Gibson made them more to pay tribute to the artist and not really to give consumers what they want. I dont think many people were looking for a guitar like this. This guitar is good for people who want to be like Joan Jett or Blackhearts fans other than that this guitar is overly limiting and there are way better guitars you can get for the money. This guitar gives you some versatility but it is way below that of a normal guitar. I would pass on this unless you are a Joan Jett in the making or a big Blackhearts fan.
Did you find this review helpful?yesno
»

AC7558's review (This content has been automatically translated from French)"An edgy riff machine."


This is a very well balanced light really easy guitar, hyper,.
Good on the other hand, I admit, the mechanics are not terrible (mini grover) ... I was pretty disappointed with it. A change then. Especially if you like attack craft (for which it is more or less expected).
Electronic level, there is a Burstbucker 3, one volume, one tone and a killswitch. It&#39;s strange but it can be used. I wonder also if there would be no way to put a simple tinker and make a killswitch micro switch ... Good idea I think.
Sion, the painting is really fine ... There is a well-worn side. No varnish, it is almost directly on the timber. To say, I can remove the paint by scrubbing with nail in place of a small poc on the back ... But hey, this is the style. Mine is white, I almost want to completely sand ...

Overall, the production is great. The handle is very nice, well designed body and components seem really robust (plate too).

The neck is like Gibson, quite thick but easy. I who was accustomed to Fender, it changed me. But suddenly, I find other feelings, that attack well.
I double cut so for access to acute is nickel.

The fact that it is actually a light guitar "punk". We want to lug around and bullied, beaten with the heavy riffs and yellow with sweat. It is not in the chouchoutterie as with ES or a big Gretsch. Kind, it was not what the fragile air.

Ah well then this is the point (mega) strong ...
A Fender tube, it removes rust max. The sound is really great, accurate, with sustain. What is astonishing for a guitar of this size. So no complaints. There is certainly a double but playing with the tone, you do get different sounds nice.
I have not been super long but I feel we can deal with a lot of styles. This micro Burstbucker 3 is really amazing, it&#39;s a very good point.
Disto it hard while being accurate. With a spring reverb and more ... I do not even speak ...

To summarize, I wanted an easy guitar, light, small and efficient. This is my first Gibson. I wanted a double cut so rather than butcher a recent or ruin me for the 60&#39;s, I found this signature (do not care about Joan Jett - I think also change the truss rod cover so that drunk me to have the name of someone else on my guitar). It does the job, it works well and it is exactly what I was looking for. In addition, it has a custom fly Gibson, not negligible.
What I like most is the sound and keeping - it&#39;s really great to have the arms. As one other opinion, it really vibrates.
What I like least ... I would say the color. And although it is not dramatic. It&#39;s detail. Otherwise, I&#39;m a little disappointed by the conduct of the agreement. But it is a constant on the Melody Maker. Even a 60&#39;s have the same problem (always according to other reviews).
But with good mechanical (still huh ... they could have made the effort at Gibson ..) and a good setting, it&#39;s gone for a set of 45 min background, without it moving. We feel that the guitar is reliable in its entirety.
I would add that, as mentioned above, if the white Gave me long, sanding, varnish and is back! The guitar is so "raw" that almost seems it is made to be arranged. That is what is nice too. They have not fixed, it leaves plenty of opportunities to those who wants to customize ... in the rules of art and of course to some extent. Should not exaggerate either ...

Basically, I recommend it to all who love the spirit of "small, efficient and reliable guitar." As mentioned below in English, "simple machine riff." Yeah its just that. And I also forgot to say that it does not frieze at all.

PS: I put 8 here for the history of cars. But I insist, it is not dead either. At the last rehearsal for example, I have not retuned once. Like what ...

Published on 06/11/08
Gibson has announced the release of the Joan Jett Signature Melody Maker, an electric guitar designed and produced in close cooperation with the rock legend herself.