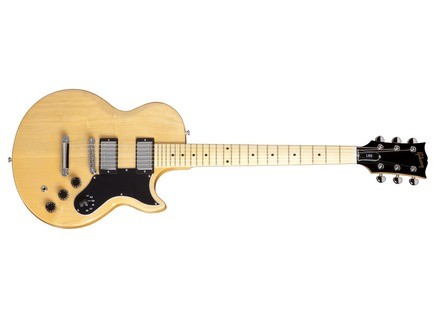 L6S, Other Shape Guitar from Gibson in the L series.

Additionally, this is basically one of Gibson's "new revolutionary" designs that I keep hearing about. During the last few years the company has come out with a lot of new guitar ideas and most of them have tanked because players don't stick with them. The main sticking point for this one seems to be the non traditional body wood and shape and also the 6 way tone selector. None of these things are new ideas, but for Gibson it's something different.

For one thing I'm not even entirely sure what all the 6 way positions do. One is a single coil splitter. There also seems to be a bass roll off and treble roll off. To be honest this is a fairly useless feature besides the coil tap. I could do without having a massive knob on the pick guard too. I would say the guitar is pretty comfortable to play. It resembles a melody maker in how it is designed. The overall construction is surprisingly good though, even for Gibson. Tuners are good. Bridge is solid. There aren't any major flaws or anything. Finish is good.

This is where it gets awful. Making this guitar all maple was a silly and terrible idea. As expected the tone is a trebley mess of bright maple awfulness. It seems like Gibson tried to pick some humbuckers that would be very warm to balance this out but the guitar itself has such a bright character that it doesn't matter. Even through my Cornford RK100 which is a super bass heavy amp, this guitar has an ice pick tone to it.

Unfortunately I returned this thing two days after buying. The sound is just that bad. Functionally it is a pretty good, although honestly very ugly design. I was told gibson actually made this style of guitar a while back and it never caught on then either. Apparently they had the bright idea to do it again with terrible tone woods. It's advertised as a guitar that can cut through the mix. Well that's an understatement. It cuts through your ears and does it with extreme pain. Not recommended unless you have the muddiest amp ever.

tjon901's review"Modern take on a 70s Gibson with simplified switching"

Gibson L6S
4
The Gibson L6S is a fringe classic from the 70s. It was designed by Bill Lawrence back when he was doing his best work with no budget. It is supposed to be an everyday version of the old Gibson L5s jazzbox. It was endorsed by many of the big players at the time and pretty popular. I believe this is the first time it is being reissued and there are some minor differences that probably make the guitar more favorable for a lot of people. This Gibson has the crazy 70s all maple construction. The fretboard is maple as well with 24 frets. It was one of the first Gibsons to have 24 frets. Up top you get standard Grover tuners with a standard tune-o-matic bridge. The switching is what makes this model cool and different from the originals. The originals had some crazy switching with phase and series in and out crazyness. This guitar takes all that and replaces it with more usable switching. The 6 way chickenhead knob on this guitar gives you every option of humbucker and single coil with both of the pickups. The rest of the controls are a master volume with a tone control for each pickup.

The upper fret access is pretty good which is rare on a 24 fret Gibson. Its 24 frets but still has the 24.75 scale lenght so the upper frets are a bit crowded but you can get to them fine. The body is kind of an odd shape for a single cut. Its like they took a jazz box and made it flat and solid. The 60s neck on this guitar is nice and what I expected from a 70s style model. I wish Gibson would start putting locking tuners and bridges on more of their models. They have them on very few but the fact that some models have then show that they can do it and just dont want to. Every new Epiphone comes with locking bridges now so I dont know what the deal is.

If this was an original model it would have come with some awesome Bill Lawrence pickups but with the crazy switching. This reissue is a bit of a trade off. You get new Generic Gibson pickups but with more usable switching. The 70s Bill Lawrence pickups are legendary and even more so when you think of the kind of budget he had to work with back then. The switching on this reissue gives you some versatility even with the mediocre pickups. The first position is your typical bridge position. It is a generic modern Gibson humbucker sound that you have heard a million times in a million different guitars. Position 2 is the bridge pickup split into a single coil. The split tones are decent but you can really tell that it is not a real single coil. The 3rd position is both pickups, the neck and the bridge split. This gives you a kind of Telecaster sound that a Stratocaster cant do due to its switching limitations. Position 4 is both pickups unsplit in full humbucker mode. This is a typical Gibson position and is good for clean tones. Position 5 is the neck in single coil mode. Like the bridge the single coil tones are decent but you can really tell that the pickup was designed for its humbucker tones primarily. The 6th position is the full fat neck humbucker that is great for bluesy leads and jazz tones. Make sure to memorize the switching because the paint on numbers that Gibson uses on these switches wear off after like 5 minutes.

This guitar was pretty underrated back in the day. It looks kind of odd and has too much maple for any hardcore Gibson player but it is still a decent guitar overall. The lack of Bill Lawrence pickups is disappointing but a sign of the times since he left Gibson years ago. The simplified switching provides much more usable tones than on the original guitar. With Gibson getting wacky these days it wouldnt be surprised if they started reissuing some more Norlin Era Gibsons. If they sell or not will be the big question. If you are into wacky Gibsons here is a period wacky Gibson for you.
Did you find this review helpful?yesno
»