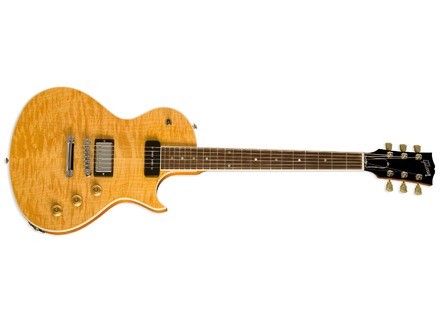 Nighthawk 2009, Other Shape Guitar from Gibson in the Nighthawk series.

floblues's review (This content has been automatically translated from French)

Gibson Nighthawk 2009
5
Ben is a Gibson made in USA of course ...
A reissue of the Nighthawk limited edition (350 copies). In fact it's more than a reissue a new version because it is the difference nighthawk home on several points: gibson 638mm pitch (instead of 650mm), micro P90 and humbucker gibson in severe acute Burstbucker in (instead configuration of the various models available on 90's), the traditional combination bridge / tailpiece stop-bar/Tune-o-Matic (instead of the original bridge fenderien).
22 frets of the neck is Les Paul Standard 59 ', there are 3 knobs, one volume per microphones and a general tone. These are very effective, they do not dampen the sound! Handy for something different! Furthermore, we sometimes hear that Gibson does not treat its always finishes: Well here it is not the case (perhaps is it because of the limited edition?)
The maple top is beautiful shower! Trans-amber varnish is perfect and enhances the wood, not a defect of short finish on my model!
The only two small negatives: the mechanics who do a little "cheap" and the belt clip is even worse on guitars at this price Gibson could put strap-lock fasteners or at least bigger (but then it goes to This time, I will change)

The handle is quite round (C profile), it fulfills the hand: for sure it does not stick strats modern flat, fast, and it remains subjective, but I find it very comfortable even with thumb on top (my usual position): a handle typical Gibson!
Access to the acute problem is without the body is very thin (about 3cm), the ergonomics of the guitar is great: having always struggled to play with shapes Lespaul (which got blocked tjrs have one), it falls naturally it is standing or sitting. It is incredibly lightweight (even more than a SG) and very well balanced, it gives just want to play!
After this form a little Les Paul with more pronounced curves, a little more modern: we like it or not ... I like!

My style is Rock (70's instead) and blues, I play on a Peavey Classic30 a Blackstar HT Dual, and yes this guitar works wonders!
The P90 (bass) at crunch sounds round and warm, without the mushy side of a humbucker, it's a dirty side and at the same exact time (typical P90), meaning he can play on slow blues (with a bit of reverb for example) or have a sound a little jazzy without problem by lowering the tone (even if it is not my sound predilections).
The Burstbucker (acute) sends the sauce! it is very bitter, I useful rhythmic crunch on rocks or with more gains solo sound between the SG and Les Paul! Although Gibson, what is expected of this kind of guitar!
And the intermediate position? one would expect an imbalance between the two microphones, but not at all! we find the mordant side of microphones acute and smoothness of P90, playing on the volumes of the microphones, you almost anything with! This is my favorite position!
Nothing to say, in my tube amp: it rock, blues ... it it sounds Gibson! basically it sounds at all!

Dreaming of a Gibson long ago, I would have liked a Les Paul for the sound but this guitar is definitely not for me ...
I had gone to buy a ES-339 which I liked a lot and when I entered the store, I fell under the charm and beauty of this "small" Gibson, I tried it and me has won 100%.
It is incredible comfort (a bit like an SG), this configuration of microphones (from the Les Paul BFG) is the ideal (as long as you love the P90), it allows great versatility of sound, I think she would go out in many styles of music (well maybe not too "hard"). In short it is a Gibson no doubt, a little more modern than traditional models, but I think for the 1279 euros it cost me (with the fly box) is a very good guitar, that we will not see anywhere because of the 350 copies (this is the class anyway! and with certificate of authenticity!)
If you are looking for a Gibson and you come across one, I urge you to try it! It does not perhaps please everyone, but I think some will also be conquered me!