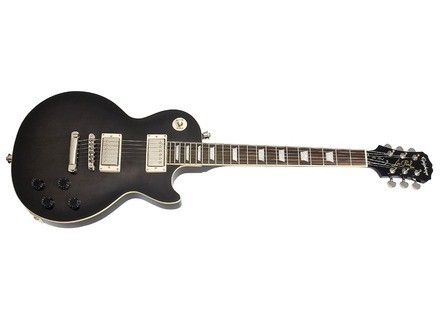 Tribute to the 2010 model it is a handle asymmetric D (thicker towards the low E string as acute mi) just be annoying for someone used for purposes sleeves, better then turn to the tribute 1960 with its handle profile 60 'slim type, but for someone used to the paul handle is perfect.
It is very heavy, not hollow mahogany, I have not weighed but should do well in the 4.5 / 5 Kg
very good ergonomics, well balanced.

it can suit all styles of music with its 3-position selector system and push / pull which allows spliter microphones.
The Gibson 57 classic and 57 classic + are enormous

The Epiphone has nothing to envy the more expensive gibson price / quality ratio is excellent, I prefer the epiphone les paul custom but also the les paul studio faded.

I do not regret this purchase!

Handle very nice. Having been accustomed to typed sleeves "Strat" ​​I was a little worried. In fact, I am much more comfortable on the big, thick neck, including pass barred.

The weight is there, and there, but a good strap and password 2:00 repeats it turns ordeal. For cons, the cut is less comfortable sitting game a cut "Strat" ​​(my Cort X1, in this case).

The passage of the "Rhythm" mode to "Treble" exchange good sound, intermediate mode is downright useless in my opinion. Plugged into my Vox VT15 (Modeling), I had to revise all my settings but I immediately felt the difference: it sends. Whether or more highly saturated rock sounds, it is comfortable. For cons, the two settings sold as simulating the passage between the single and double coil ... It's just a tone control anything. But, used with the micro switch allows refining its sound (I say!)

As mentioned above, wide range of use, but I think the beast very much at ease on saturated sound that clear.

I play at home on a Vox VT15, then, but I just invest in a Marshall G80R CD used for rehearsals. They seem to get along very well, but check when I finished testing the amp.

She has been there for a few weeks, but immediately supplanted my Cort X1: round, sounds (Gibson pickups 57 and 57 +, it helps) ... But I do still have the two volume knobs (one for each pickup), accessory which I had never been accustomed.

Never able to try it, she was out in all physical stores, so remote. But definitely not disappointed! I had set a maximum budget of € 500, and I for my money. I would have to try authentic Gibson to see (hear) if there is much difference than that.