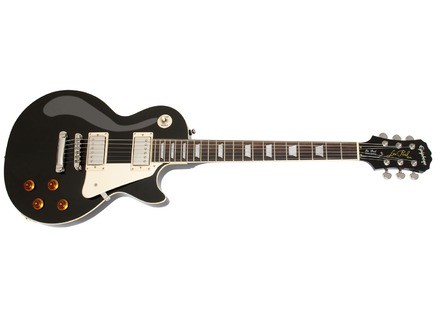 I absolutely love my epi. No guitar is perfect, but this one isn't that far behind. The finish I chose was a dark red quilt, almost blood red in colour. The body is solidas a brick (a good 10+pounder) and the sound is very good for "Gibson-Designed" humbuckers. The fact that it is a Limited Edition also urged me to get this guitar.

Above I did mention the pickups were good, but i think that i can do better with some custom pickups I'll get in the near future. Im considering a set of open coil PRS specials or maybe some Emg's. Aside from tune ups, every small probelm I have had has been under warrantee. When I first purchase the guitar I had a bad pot for the 3 way switch, so i had it replaced with a Gibson one from Mars; no charge. Along with the new pot the guy at Mars also fixed the setup, lowered the action by a hair, and waxed the guitar. More recently, (i have had it for about 6 months) I had a spur on the bridge fixed; it was also free at Mars. From my experience there, I'd recommend Mars to any musician for their excellent service and quality.

I think the above statement said alot about this, but anyway the overall quality was good. You get what you pay for, so I am not surprised by a few glitches. As far as construction goes, the quilted top looks very deep and not at all like a spary on paint. The body and neck have a cream binding that looks great againt the dark red finish. All the hardware is black from tuners to stopbar and the pickups are open coiled. The neck it strait as you could ask for and the trapezoid inlays are perfect. A True Rock Guitar!!!

The rating for this quitar is not really fair the way i see it. For what you pay, you get the an extreme quality axe. But when problems come, don't be surprised. I know if i didn't have a place like Mars to get it fixed, the review would not be as good. All in all, if i had the money, i would be reviewing a Gibson right now, but Epiphone is far from sub standard. If this guitar is in you're price range check it out!

Steve_Boudreaux's review"Replace The Pickups, And This Guitar Is As Good As A Les Paul Gets- Bar NONE"

Epiphone Les Paul Standard
4
Don't believe those who say the Epiphone Les Paul is not top-notch, or nearly so- the only thing that disappoints are the pickups, and even they are decent. I upgraded the pups to Gibson Burstbucker Pro's- nothing else was needed. I upgraded the tuners, but only because I had a set of Gibson bell-knob tuners that looked cooler- the original Grover tuners (branded, not copies) were as good as the ones I put on. I decided to wait to see how the pots, switch, caps and wiring, and the nut, performed, and now, three years later, with considerable play, they are all working just fine.

Don't let anyone tell you Agile, SX, or anybody else's LP is better- it just is not so. If these were not made in Indonesia, they would be perfect.

Exact copy of the Gibson Les Paul in body and neck shape- easy to play, if a bit heavy.

Works fine with any amp I have played it with.

Black, ivory and chrome color scheme avoids glitch and flash. This is what a Les Paul should look like.
Did you find this review helpful?yesno
»

Epiphone Les Paul Standard
4
Epiphone is Gibsons lower price line of guitar. They have pretty much the same specs as the Gibson models. The electronics are not as good but they are made from the species of wood but the wood may not be the best quality. The Les Paul standard guitar was introduced in 1958. They came with the first PAF pickups and when people talk about the Gibson tone they are talking about these. They have the standard Les Paul setup with mahogany body with a maple top and a mahogany neck with a 22 fret rosewood fretboard. Two humbucking Alnico Classic pickups with dual volume and tone controls with a 3 way toggle switch pickup selector. The up position on the switch selects the neck pickup. The middle position on the pickup selector selects both pickups. And the down position on the pickup selector selects the bridge pickup. It has a tune-o-matic bridge and stop tail piece.

The Epiphone Les Paul standard has all of the same advantages and disadvantages in playability that every Les Paul has. If you are use to modern guitars with thin necks the Les Paul neck will be very big for you. Because of the set neck design there is a large neck tenon and joint. This can make the upper frets hard for some people to reach because the body essentially joins the neck at the 17th fret. After the 17th fret you are reaching around the body to get to the frets. The tuning stability is good because there is no tremolo. The quality of hardware Epiphone uses is not that great. I have had problems with the input jack unscrewing itself and things like that.

The pickups Epiphone uses are not that great. They are pretty muddy and dead. You do not get much attack with these pickups. Since these pickups do not have much definition the neck position can get really muddy. These guitars are chambered like the Gibson Les Paul standard guitars. This takes away some of the thickness from the tone. With a high gain amp the sound might get muddy due to the lack of definition. With some types of music these pickups are great. If you want a bluesy sound these pickups will do really good and you will be able to get a smooth tone out of them. With a pickup swap this guitar can sound great so I would recommend to anyone who has one of these Epiphones to try it out with some after market pickups.

If you are looking for a cheap Gibson Les Paul alternative there are better guitars out there. Epiphone makes the only official Les Paul copies but there are some other copies that are of a lot better quality. I would recommend looking at an Agile Les Paul copy. You can get a guitar half the price of the Epiphone but with better quality, and for the price you pay for this Epiphone you can get an Agile with an ebony fretboard and Gibson quality hardware.
Did you find this review helpful?yesno
»

Design wise, the Les Paul was never the most ergonomic guitar on the planet, and this Epiphone model is no exception. The Epiphone model, like the 2008 model Gibson LP Standard, features chambered construction so it's lighter than your average LP, but as I stated in my LP Standard review, the cost of a lighter wait is a thinner/un LP like tone in my opinion. The upper fret access on Les Pauls is decent enough, though the neck heel can get in the way on occasion.

Getting a decent tone out of this guitar is not difficult. Like nearly every Epiphone guitar I've tried, it's plagued with muddy, cheap sounding pickups that lack note definition, so the tones as stock are not even close to my Gibson LP that is loaded with '57 Classics. However, I have tried models that have had replaced pickups, and it does greatly improve the tone of the guitar plugged in.

I've tried these guitars through various Marshall and Mesa Boogie amplifiers, both in stock and modified form. I would say the tones are reasonable enough when you consider the price they sell for new. O

The clean tones are fair enough when set up correctly. The pickups lack a lot of the punch of some higher quality models from Gibson, DiMarzio or Seymour Duncan, but even considering that, the cleans have a decent low end and midrange tone that's excellent for jazzy and bluesy tones.

The overdrive tones are nice for the guitar for sure. It seems to excel at seventies/eighties arena type hard rock. The guitar isn't quite as dynamic as my Gibson LP, so using the volume and tone controls really don't do quite as much as I might like.

All in all, the stock tones really are average at best. It improves greatly if you upgrade the pickups, but that's an additional expense to consider when buying...

All in all I figure the Epiphone Les Paul Standard is a decent lower budget guitar for someone who really wants to be the next Jimmy Page or Slash, but is on a budget. The construction of the guitar is fine and it plays fairly well... but the electronics are simply just not up to par. Personally, if I was spending $600 on a flamed top Epiphone LP Standard and then an additional $150 or $200 on pickups/electronics... I would simply put my money into a second hand Gibson Les Paul Studio or Studio Faded, which to me is a far superior instrument and will hold its value far better than an Epiphone.

Did you find this review helpful?yesno
»
Read the 67 user reviews on the Epiphone Les Paul Standard »