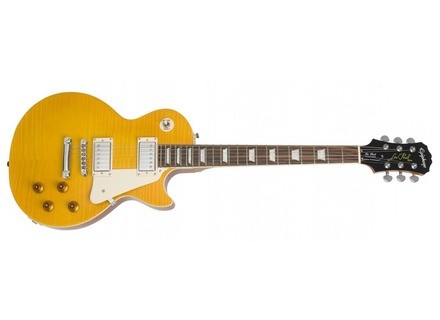 Epiphone Les Paul Standard Plus Top
4
Bought in a music store in Québec. Went to check and found the beautiful one. Paid 530$ canadian used with a case, a new set of strings and a pro setup. I was looking as Les Paul for a good versatile blues-jazz-all stuff guitar. Believe me it delivers.

I really like the price I got it for. I have to mention the beautiful finish, don't seem to find it anywhere else(weird)kinda caramel burst.Very beautiful. Soundwise you get a fat and round sound. I find the balance, when you play seated, very good. Can wait to get a nice amp to plug it in.

I don't have complaints about it.

The fact that it is heavy is comforting for me on that point. I haven't found any defects or or problems with it( it's used so minor cosmetical blemishes). Seems to be very solid. And beautiful WOW!!

Beautiful big sounding guitar. But try many as they can differ on neck thickness, finish. Anyway no 2 guitars are identical so.

Epiphone Les Paul Standard Plus Top
5
I bought it from a local store for 580 euro!

This guitar is great!The body is perfect!A real les paul for sure!

As I said before this guitar is great!The construction is awesome!

I love les paul guitars!I use this guitar for gigs and I have done some recording!This guitar is great!There isn't a big difference between this and a gibson!And believe me,if you change pick ups and buy two gibson you will not find any difference!

SO THIS IS A REAL LES PAUL

Epiphone Les Paul Standard Plus Top
5
Purchased through a local music store in Metepec, Mexico. Cost was $5300 pesos, which at the time was equivalant to about $460 US Dollars

It's an impressive guitar all around. Mine is a 2002 Standard Plus model made in China. It came stock with chrome Grover tuners and a beautiful Vintage burst finish over highly flamed and bookend maple.
It's a classic!

This guitar is always compared to Gibson's Les Paul. I don't think that fair considering the $1500 price difference!!!
Though they aren't Gibson's, Epiphones Les Paul a very well made and high quality guitars in their own right. I would recommend anyone looking for a guitar for less than a Grand, check it out.

Although the pickups that came with the guitar aren't bad, they don't even come close to bringing out the sound this guitar is capable of. I switched over to Seymour Duncan's 59s and now it's like a different guitar! I'd still like to experiment with other pups as many players claim there are even better options.

Another thing the guitar requiered was a professional setup and a bone nut. This isn't really expensive to do and also makes a huge difference. The stock nut is plastic and you will notice the sound change when you switch to bone!

Epiphone's site says the body of these guitars are mahogany/adler, so I thought I'd find some kind of multi-ply wood inside. To my surprize, when I opened her up to change the pups, I found what seems to be a solid chunk of mahogany wood with a slab of maple on top.
The finish is perfect from the factory. There isn't a blemish anywhere. The feel, look and sound of these guitars project high quality.

It's a solid guitar that balances out nicely

After the pup change, the bone nut and pro setup, I ended up with an OUTSTANDING instrument. I've been playing for about 8 months so I'm really a beginner but in that time, I've bought a number of guitars and I've learned from each. I now have a pretty solid idea of what works and what doesn't. Believe it or not, it's very difficult to buy a "terrible" guitar now a days. Even the low end instruments of major manufactures are built pretty well.

Taking that in to consideration, I'd say that Epiphone's Les Paul are one of the best guitars available for under $1000.

If you're a beginner and would like to buy a quality guitar without making a huge investment, this guitar is a great choice. It'll grow with you while your playing improves. Also as a beginner, I think you'll enjoy how easy to play it is, especially after a good setup. The neck is very nice.

Please don't think it's just a beginners guitar. In the right hands, this guitar will take off and many pros use it.

Another plus is Epiphone's customer service. While I've had no problems with my guitar, I did contact them to learn more about it and was amazed by the quality and speed of service.

One last thing I would recommend is that you play as many of these BEFORE you buy yours. I tried many of them out and they all felt, looked and sounded just a bit difference. Even the colors change quite a bit from model to model.

I think these Les Pauls offer quality way beyond their price. Even if you invest in new pups and a pro setup, you'll still be way ahead.

Epiphone Les Paul Standard Plus Top
3
Purchased from Same Day Music as a replacement for an Epiphone LP-100. Initially, paid $489.00 but was given a $60 discount due to 1st guitar arriving damaged and replacement guitar had absolutely no set up and many finish flaws. Fianl cost $429.00.

After a set up to exceed Gibson set up specs. for string height, neck relief, intonnation, pickup height, new Gibson Vintage 10-46s, etc. this guitar pretty much nails the sound and feel of a 57 Les Paul and plays and sounds better than any of the Les Pauls and 335s I have played at Guitar Center. Also, the translucent amber finish and flamed maple top is a looker!

My replacement guitar arrived with string heights at the 12th fret exceeding 1/4" and totally bad intonnation and must have missed any inspection and set up in the USA as the sticker indicated. Also, there were dark glue stains around some binding and body joints, binding that bled over into the top and rough cut pickguard and truss rod cover. Someone at Gibson/Epiphone should have paid more attention to what they were doing assuming this guitar was not tampered with. It was a new factory fresh item. It took days of set up and correction to fix all of this except the finish flaws but with the final price, I am satisfied.

After set up and correction of the above mentioned problems, it is a very solid and tone filled instrument. There have been negative comments about Epiphone pickups but these new designed by Gibson USA seem to fix that. They ohm out at 8.75 neck and 13.05 bridge, are wax potted and the sound is so good when properly adjusted that they really don't justify swapping out for Gibson or Seymours.

Bottom line is this is an excellent value. I simply got one that slipped through the set up cracks and was really a blem or second. Suggest that if you buy one either you check it out in person or ensure that you are dealing with an internet retailer like SameDayMusic that will stand behind the sale and either replace the instrument or provide a discount for your problems. Also, you need to be aware of the set up needs for you instrument and your personal preferences. Be aware that there are negative reviews for Gibson products that cost much more so this is an excellent value with a little effort. Fortunately, my blem issues were correctable or in areas that I see but not the audience but will carry with theinstrument for it's life.

This review was originally published on http://www.musicgearreview.com
Did you find this review helpful?yesno
»
Read the 41 user reviews on the Epiphone Les Paul Standard Plus Top »

See all 410 photos of Epiphone Les Paul Standard Plus Top »

View all 2 videos of Epiphone Les Paul Standard Plus Top »

Other names: les paul standard plus