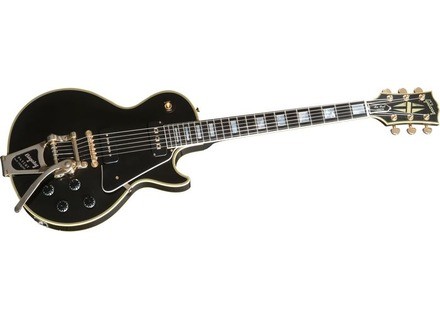 Gibson 1954 Les Paul Custom Black Beauty Bigsby VOS
4
One of the more unique features to ever come out during this time was the Bigsby tremolo. It's a very innovate feature, although I'm not the biggest fan of this in practice. The body is mahogany, and I believe it doesn't have the normal maple top. It has a mahogany neck with an ebony fretboard, 22 frets, trapezoid inlays, binding, bigsby tremolo system, two P90s, two volumes, two tones and a three way switch.

The guitar was put together great, and it should be for the price that these cost. The inlays were nicely done, and there were no noticeable fillers in them. The fretboard itself was nice and dark without any brown streaks that can sometimes occur. The nut was cut properly, and that's especially important for the Bigsby. The fretwork was also nice; there were no sharp edges and the frets were properly crowned. The biggest issue I had with this guitar is that I simply don't dig the Bigsby trems. They feel weird to me. On top of that, I'm not a huge fan of the way the neck joint gets in the way on Les Paul guitars.

I'm not a fan of the way the Bigsby makes the guitar sound. It just sounds different and resonates differently. That said, the guitar sounded amazing. The construction allows this guitar to sound super fat, but the ebony also gives it some nice cut in the high end. The bridge pickup got this great vintage tone when I put it through a nice Fender. Once I hit it with a tubescreamer, all hell broke loose. It was just pure tone. The neck pickup delivered this wonderful woody tone that was to die for. There's really no need to change these pickups, unlike certain other Gibson humbuckers out there.

The Bigsby is something I've never really enjoyed. It just feels odd when using it, and I find that the angle of the bridge is a bit awkward. That said, it's still a great guitar. The QC was top notch, and I didn't really find many issues with this guitar at all, aside from the price that Gibson was asking for.
Did you find this review helpful?yesno
»