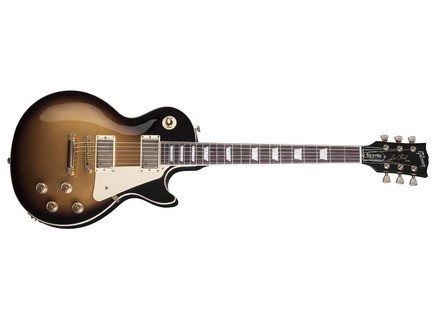 cosmitron2's review (This content has been automatically translated from French)" Bling Bling the very smart!"

Gibson Bill Kelliher "Halcyon" Les Paul
5
The Les Paul Bill Kelliher "Halcyon" is manufactured in the United States and is part of the "Hit & Run" series and is not outside the Custom Shop. This is a limited model.
There are the specifics of the Les Paul body "chambered" mahogany, mahogany, maple and rosewood fingerboard, 22 frets, short scale, bridge Tune-O-Matic Nashville type 3 position switch for 2 Humbucker, 2 volumes 2 tones.
The word "Halcyon" on very typo Halloween is on the plate of the truss rod and not under the nail on the head. A detail that those who love the guitar without wanting to lug image fan will appreciate.
Rhythm guitarist of Mastodon is a true guitar-nerd and plays primarily on the period from Gibson Norlin (equivalent to the period for CBS Fender) so disparaged by purists. Some details Halcyon testify. Large head, the handle end profile rather flat table, tulips mech metal and finish for Goldburst 80s side.
He called his first Gibson signature "Golden Axe" in reference to a video game, and Halcyon also does not refer to a bird but a game console 80s.
Plastic lids cavities electronics have a faux leather texture a little like cheap VHS tapes of yesteryear. Funny.
In addition to these and other aesthetic details winks obscure, the Halcyon is especially equipped with microphones Lace Dissonant Aggressor, splitables, signing Bill Kelliher also. A small wonder, much more subtle than their name would suggest.

To complete the tour, we note that the guitar at the very appearance Standard boasts however a gold-plated hardware, the prerogative of the Les Paul Custom. It comes in a pink interior brown holster, very 90s.

The neck profile "slim" is quite similar to my Les Paul Custom Silverburst 78 and that of my Les Paul Deluxe 81. The grip is very nice to me and without much surprise. on the other hand, fans of big logs so râleront '58. Access to acute is that of a Les Paul. After playing on this model for decades, I must admit that this is the least of my worries but obviously lovers "superstrats" to handle German motorway will face aback to this rural county. The key is wider (+/-) one millimeter a Les Paul Standard and requires a little more attention. It needs to be done - not the end of the world - but in my opinion, we gain clarity of play plastic net (binding) which encircles gracefully covers the edges of the button also frets, an expensive feature to. brand that has gone on a number of models for this year.

Dissonant assault.
Cornford Roadhouse amp tested on 30, Jet City 20H and Podfarm, Dissonant Aggressor Lace pickups are, in my case, the real surprise of the model. The lower midrange is present at all levels of gain while maintaining a very beautiful musical clarity. The output level is far from shy, but is still far chainsaws which were often right as we seek a more powerful option. It works very well in the clear, but it is so good in saturated I admit I tend to dwell on this configuration. The sounds produced by the split can be used once will not hurt. It twang, it sings, it casserole! The split is done by "push-pull" not "push-push". A good place for hostile and turbulent situations.
The pickups have their own stamp, or vintage or modern guitar accompanying a very nice way.
The wiring of the electronic PCB happens, though found on a lot of the recent Paul. It does not have much importance in terms of sound but in case of change of potentiometer - you never know - we are glad not to have to change everything.

Halcyon was delivered to me in no time there three days, and I have not stopped playing it since. I had a lot of Les Paul and I still have 5 others (1978 LPC 1981 Deluxe 2001 Classic, 2012 and 2007 Traditional YOUR R7).
Halcyon has a little trick of her own (micro?).
It is also one of the few that I bought new, and despite its fairly standard fare, it is a pretty serious investment. Given the peculiarities of the model, neck profile, pickups and I would strongly advise a test before buying even if I did not have that choice. Finally, I did not have any adjustments to make unpacking. Having a good few surprises that I have had with other recent models.
Fans of Bill Kelliher and Mastodon will get their money, but the Halcyon should appeal to any fan of Les Paul and / or sound good.