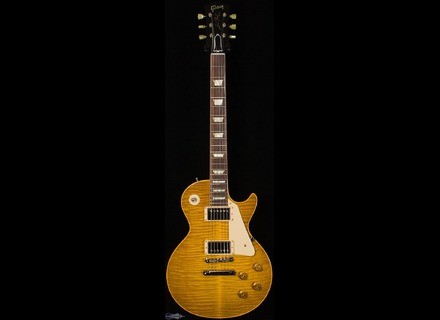 Gibson 50th Anniversary 1959 Les Paul Standard
4
For the 50th Anniversary of Gibson, they decided to release a slightly different color than what is normally associated with Gibsons. This was a Lemon Burst model, and it was pretty cool looking. The guitar features a mahogany body with a maple top, mahogany neck with a rosewood fretboard, 22 frets, trapezoid inlays, pickguard, binding, hard tail bridge, two humbuckers, two volumes, two tones and a three way switch.

The first thing you notice is that the flame stands out more than some of the other models. They seemed to have used higher quality flame tops on these vs other Gibsons. The guitar was put together in a fairly nice manner. There were no issues with the nut. The best way to tell is to simply play it. If you keep noticing you're going out of tune and it "pings" when you tune, that means the nut is cut improperly. The fretwork was also pretty good on this. I was able to achieve relatively low action without any real issues. The binding work looked nice, and the chrome hardware didn't have any tarnish on it.