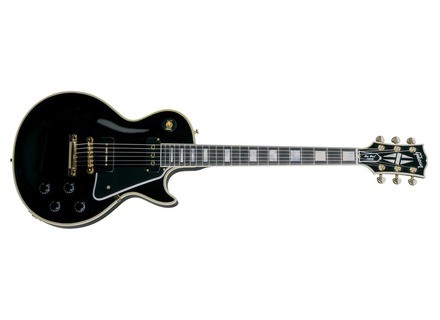 Gibson 1954 Les Paul Custom VOS
4
This is a Custom Shop version of the famous 54 Black Beauty that was released oh so long ago. In reality, this is a bit different from the actual 54 that came out around that time, and I actually prefer this to the old one, ergonomically (and economically). The guitar features a mahogany body with a maple top, mahogany neck with an ebony fretboard, 22 frets, trapezoid inlays, pickguard, binding, hard tail bridge, two P90 pickups, two volumes, two tones and a three way switch.

The guitar had a very nice weight to it. It wasn't too heavy, but it also wasn't a balsa wood guitar, either. It seemed to hover around the 8 lb mark, which tends to be perfect for Les Paul guitars, from what I've found. It reverberated quite nicely, too. The fretwork on this was pretty good, but I've been better from Gibson. That said, I tend to see worse lately, so don't look too deeply into that. The nut was cut correctly, so no issues there. All it needed was a little bit of lube to make it work the way it should. I restrung this with 9s as I tend to prefer those instead of 10s, and it was just where I wanted it.

The P90s in this thing sounded great. If you've never heard P90s before, think of how single coils sound. Now add some balls to them and take out the annoying treble that tends to plague them. That's what you can expect from these. They're super thick, and they work great with low to mid gain amps. You can use these with high gain, but I find they tend to be a bit too spongy to keep it together for the faster and tighter metal riffing that you hear in today's music. Through a cranked Marshall, these things just really came alive. It had the perfect amount of compression, the perfect amount of openness, the perfect amount of give to the low strings, and it just screamed the ultimate hard rock tone. The only issue was the annoying hum that came with these.

These are pretty expensive, but they're totally worth it if you can find a good one. The P90s in these guitars really sound amazing, and they add a dimension to tone that you don't normally hear in today's music thanks to the overwhelming majority preferring humbuckers. If you ever get the chance to try one of these out, try it with an old school Marshall or some sort of boosted Fender if you're more into the blues kind of tone.

Gibson 1954 Les Paul Custom VOS
5
1954 is probably one of the most classic and definitive years of the Les Paul, and this Custom Black Beauty pulls out all the stops in an attempt to create one of the coolest vintage replicas of all time. This guitar has a mahogany body (and I believe it doesn't have the standard maple top? I could be wrong), a mahogany neck with 22 frets, binding, ebony fretboard, trapezoid inlays, pickguard, hard tail bridge, two P90 pickups, two volumes, two tones and a three way switch.

These custom models are put together very well. The first thing you notice is that the finish itself was pretty much flawless. I couldn't find any drips or any issues where the binding meets the paint. The nut itself was cut perfectly, so there were no tuning problems to worry about. The frets on this were nicely leveled, and I was able to get some nice action going. The ends were also not sharp, so it didn't hurt your hand every time you went up and down the neck.

This guitar just reeks of vintage tone. First of all, P90s are some of my favorite pickups for those crazy vintage tones. They sound like very beefy single coils without the crazy high end going on. The bridge pickup works amazing for clean. I had one of the best clean tones going on with this thing through a Fender. I added some gain, and it was blues for days. The neck pickup had that awesome woody tone going on for it, and it just blew my mind now nicely this guitar works out for things like blues and hard tock. The middle position was pretty useless, though.

These guitars are pretty expensive, but if you can afford it, this is one of the best out there. The classic P90 tone is crazy on this. I really wish I could have taken this guitar home, but it just wasn't meant to be. Maybe down the road I'll get one...once I have an unlimited funding of money or something.
Did you find this review helpful?yesno
»

Gibson 1954 Les Paul Custom VOS
5
The Gibson Custom Shop Historic 1954 is a replica of the original guitar made back in 1954. The guitar has a mahogany body with a maple top, mahogany neck with a rosewood fretboard, special bridge like what was used on the original 1954, 22 frets, block/trapezoid inlays, a pickguard, two P90 pickups, two volumes, two tones and a three way switch.

I prefer this over the 1952, personally. The bridge, while not used on most of today's guitars, still feels familiar. Where as the 1952's bridge had that weird brace piece, this is closer to a normal hardtail bridge that everyone knows and loves. The fretwork on this guitar was great. The frets were nicely crowned, and they had a properly cut edge so they don't cut your hand. The fit and finish was top notch, too. I didn't find any drips in the finish, no scratches in the clear coat or anything like that.

The P90s in this thing are pretty awesome. For those who have never played a P90 before, they're kinda similar to single coils, but they have their own vibe going on. They're a little thicker and produce a nicely pronounced "vowely" kinda sound. I like to think of them as the polite man's single coils. The bridge was awesome for that old school classic rock Cream kinda vibe. It also did blues amazingly well. The neck was a bit hard for me to use since I like higher output pickups when soloing, but it's all a matter of personal taste. My style tends to lead more towards metal, so that's why I was having issues with the neck pickup.

These guitars are a sight to behold. They feel totally vintage, but they're brand new. I can understand why Gibson is charging as much as they do for these given how much time and care was taken when building this. If you have the money, it's worth checking out. If you don't have the money, see if you can convince a guy at a music store to at least let you play one. They're really something.
Did you find this review helpful?yesno
»

Gibson 1954 Les Paul Custom VOS
4
The Black Beauty was Gibsons first super high end solid body electric guitar. They took the 1953 design and put a new and improved bridge on it. This was the first guitar with a tune-o-matic on it. It also was the first Les Paul to have the now famous black paint job. Les Paul wanted his guitars to come in two colors Gold and Black. This guitar is built like a Les Paul should be. It has a 1 piece non chambered mahogany body. The Les Paul Customs did not have maple tops. It has a big fat mahogany neck with an ebony fretboard. The fretboard has 22 frets. It has the big custom headstock with the split diamond inlay. The pickups in this guitar are the 2nd generation P90s with the improved magnets. The controls are typical Les Paul with a volume and tone for each pickup and a 3 way on the upper part of the body.

This guitar certainly feels like it is from 1954. It has the 50s style neck which some people love and some people hate. I dont like it personally but I have big enough hands that I can play it fine. Some people with smaller hands cant stand these necks. These guitars were also called fretless wonders because of their super low action provided by their super low frets. If you dont have a good setup these features can make these guitars almost unplayable. These guitars are not as heavy as you would expect. If Gibson can make these with 1 piece mahogany body guitars that are non chambered but not heavy why do they have to chamber their other guitar to make them lighter?

This guitar also sounds like it is 1954. With the P-90s in the Les Paul you get a unique tone that you dont get with most Les Pauls that have humbuckers. P-90s have a more twangy tone like a single coil but they also have some low end warmth like humbuckers. They have a vintage output but they can still rockout. Because they have a bit of warmth along with the single coil bite they do great overdriven tones. A lot of heavy records from the 60s and 70s were done with P-90 pickups because of this. They have the bite of a single coil with some humbucker warmth thrown in to keep them from being too harsh with overdrive. They are good for cleans also. Many jazz guitars still use P-90s for the perfect jazz tone as well. They are good overall pickups. Since they are single coils they will still give you some 60 cycle hum so be aware of that.

No one really buys these Les Paul Customs to play them. Unless you are a big rockstar you arent going to take a 5k guitar out on a gig with you. These guitars Gibson are putting out are pretty much halo guitars that will go in someones collection so he can resell it in 20 years. This is a shame because they are a part of guitar history and great guitars at their base level. There are cheaper options out there if you want a Les Paul with P-90s like the 60's or 50's Tribute Les Pauls which you can get for less than 1000 dollars now. If you just gotta have a 54 Custom here it is, get your wallet out.
Did you find this review helpful?yesno
»
Read the 5 user reviews on the Gibson 1954 Les Paul Custom VOS »