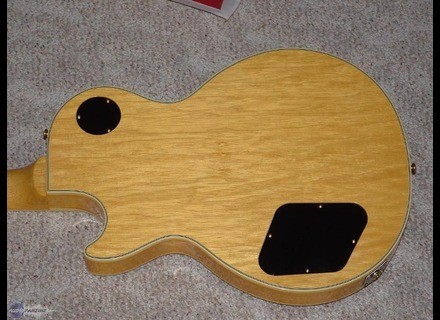 Gibson Les Paul Custom Shop Korina
4
Gibson is mostly known for utilizing their mahogany bodies with their guitars, but they have a few guitars out there, namely this one, that use a wood called Korina. It's actually called Limba, if I remember correctly. I'm not entirely sure why the name changed, but I'm guessing it's similar to Tyler and him calling the Jelutong wood Mamywo. The guitar features a korina body, a korina neck with a rosewood fretboard, 22 frets, binding, standard block/trapezoid inlays, TOM style bridge, two humbuckers, two volumes, two tones and a three way switch.

The guitar had a nicely cut nut, and that was a welcomed sight. There are so many Gibsons out there with poorly cut nuts that it's ridiculous. I'm not sure why Gibson (and Fender) have so many issues cutting nuts... The frets on this, however, needed some work. At the upper frets, I noticed that the frets weren't level when I started analyzing the neck. This happens when the fretboard isn't perfectly level when they go to install the frets, and it can sometimes cause issues with getting the action to where you need it. A lot of people don't notice it because they don't aim for action below 1/16'', but for someone like me, I tend to notice it. The rest of the guitar was pretty much what you'd expect from Gibson.

The guitar itself was fairly bright sounding when compared to a normal Les Paul. You don't have that low end grunt and low mids that Gibson excels at. Instead, you have this tight, bright kind of sound that is more in your face than the rhythm monster that the standard Les Paul is. The pickups in this are your standard Gibson pickups, and they're not my favorites. The bridge pickup works great for hard rock and blues. You can get one sick blues tone once you roll off the tone knob a bit, and leads work quite well. However, it is lacking for most any other style. It's not tight enough for metal, and it's not liquid enough for fusion. That's not to say it can't do those styles; I just think there are better pickups for it. The neck pickup is pretty much the exact same story.

These are some very killer guitars, but you have to like korina as a body wood. If you don't, you'll find yourself regretting you ever bought one of these. Unfortunately, the only real way to check these out is if you go in the store and play one. There are a few dealers out there who still have these guitars in stock, but many dealers are moving towards not stocking guitars like this because of potential returns.
Did you find this review helpful?yesno
»

flatdream's review (This content has been automatically translated from French)

She is very present and vampirizes by his presence.
I play marshal (jcm 900 combo) and fender (blues deville)
the sound range is surprisingly wide each position of the mic is very diferentes, never aggressive ...
Fat but very defined rock slamming while still warm and the low input of the amp it opens a very nice sweet jazz palette ...
I love all those sounds and it's even making it unique for a les paul

I've had a year and it did not stop surprising me
I like its particularity: the side slamming hot but I never found with another guitar.
the least ....... it never strat Sonera but it is not the purpose
I tried many other les paul (std and custom, vintage, recent ...) and this one is unlike a kind of summary of the quality of each one I have tried with a kind of aditional power.
I came across it by chance and I would like the chance to repeat such a discovery one day (since it is a special order custom shop's previous owner)
Did you find this review helpful?yesno
»