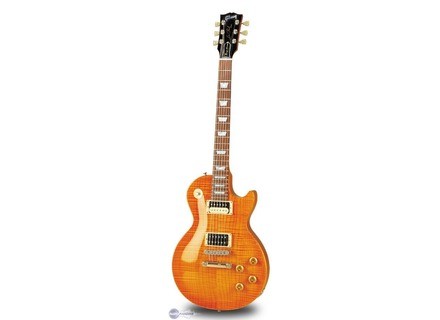 Gibson Les Paul Signature Gary Moore
3
An early 2000's Gary Moore Les Paul Guitar, made in the USA. I bought it new on clearance from an online dealer. The Gary Moore sig. was designed with Gary Moore the guitar great, with the thought of making a great sounding, inexpensive L.P. It has a mahogany back and neck, carved AA maple top with a 22-fret rosewood fingerboard with pearl trapezoid inlays. Gary’s signature is on the truss rod cover. The neck is a very thick 50’s? style and has a 24 ¾” Scale. It has a standard Tune-o-matic Bridge and a Stopbar Tailpiece. The hardware is nickel with “perloid” tuning pegs. The Gary Moore was Gibson’s first attempt to utilize the Burstbucker pickups in the U.S., and has a reversed Zebra Burst-Bucker on the Rhythm and an Open-coil Burst-Bucker for the treble. They are basically overwound to make them sound hotter – a tribute to an old L.P. that Moore got from Blues legend Peter Green. It has the usual tone and volume control for each pickup and a three way selector switch. It has a Lemonburst finish – distinctive for this model guitar. It came with a custom hardshell case with a dark blue interior instead of the bordello pink that usually comes in Gibson cases. It also has a satin dust cover with Moore’s signature. A signed pickguard comes with the guitar – not installed. All in all, pretty standard Les Paul characteristics.

The guitar has typical Les Paul access to the upper frets, which can be hard to reach - especially if you have large hands. With the three way toggle and two humbucker pickups you can get a wide variety of sounds.
I never weighed it but it was very much on the heavy side. Your shoulder will feel it after 10-15 minutes.
The neck on this guitar was HUGE. I kept it in storage for the first few years I had it and after a few years of my lead playing developing I brought it out to record with and found it very hard to get around on due to the size. I was used to the 60's carve neck on my '67 Gibby Flying V reissue (which is about perfect!).
This was actually the second one I owned after I returned the first one that was shipped to me due to a faulty truss rod the wouldn't tighten and some other cosmetic issues.
The next one had a pretty nasty mineral stain going through the body but I decided to keep it anyway.

I used this guitar with an Egnater IE4 preamp, a Peavey 5150II, Marshall TSL and a Boogie DC-5. The amps were paired with a VHT Fatbottom 4x12 that had Eminence P50E's and a Marshall 1960 B cab with stock speakers.

I usually go for a nice thick Jerry Cantrell AIC tone, to use with my modern rock/metal band.

The guitar had a very pronounced midrange and high end with not much bass. It was tight with a mid and treble crunch under high gain playing. I would attribute this to the Burstbucker pickups it had. I did not like the sound at all. The cleans were just ok, I didn't think the Burstbucker pups cleaned up very well.

My favorite sounds with this guitar were the high gain lead tones with the neck pickup. I found all other applications average at best.

Overall it was a very limited sound for my needs.

Let me state that I was young when I bought this guitar and didn't know much about different pickups, neck carves, etc. I just saw Les Paul, a famous guys name, clearance price and thought it would be killer for an LP.
After much more experience and having owned many guitars during the years where I would buy, try and flip, this guitar was a terrible match for my style and what I wanted it to do for me

I pretty much disliked everything about this guitar, except some lead sounds, the price and the very cool blue lined case.
I think it ws a good value for someone more vintage minded that loves huge necked LP's and the Burstbucker pups.
Knowing what I know now, I still would have bought this guitar because I held onto it in storage (maybe played it 4 hours total over 6-7 years) and ended up selling it for almost double to someone who was a GM fan.
Did you find this review helpful?yesno
»

Gibson Les Paul Signature Gary Moore
4
Gary Moore has always been one of my favorite Les Paul players. To be honest, I preferred it when he used to use his Charvel guitars, but the blues era he went through wasn't too bad. This is definitely meant for blues more than the 80s rock he used to do. The guitar features a mahogany body with a maple top, mahogany neck with a rosewood fretboard, 22 frets, trapezoid inlays, pickguard, binding, hard tail bridge, two humbuckers, two volumes, two tones and a three way switch.

The inlay work on this was done nicely. There were no fillers or anything like that in there like I've found in some lower end Gibsons. The nut itself was cut properly, although the string gauge that was put on this guitar was wrong. Someone put 11s on it, and they were a touch too big for the nut on the bass side. The fretwork itself seemed to be great with no annoying edges slicing your hand or uncrowned frets.

The biggest issue I have with this guitar is the fact that it costs a ton. If you're looking to get one, I recommend buying used as you'll get a better value for your dollar. The QC issues tend to be smaller, but be sure to pay attention to any tuning issues, as well as any potential dead frets once you start lowering the action. Some even have humps in the fretboards, but those are pretty rare. Keep in mind that this is different from the one with the P90 in the neck.

Skyscrapers of very high quality, I never the revendrais and do not regret this purchase.

An advice: if you like rock and you have the opportunity to find a dark ....

Gibson Les Paul Signature Gary Moore
5
Made in USA, standard design of the Les Paul: mahogany body (one piece), flamed maple top (Tiger at that level), mahogany neck, rosewood fingerboard. No binding (body or neck) pickups Burstbuckers (the first) with microphones serious is "reversed" (I shall return). One color: lemon burst, absolutely beautiful. A pickguard with the signing of Gary is provided, not installed. Finally, the standard flightcase is a beautiful carpet of royal blue, instead of the usual horrible pink.
The neck is the premise of "new models" standard, between 50 and 60 in terms of profile, with a touch wider than the les paul 90's.

I was not a fan of the handle of LPGM, since my preference is for the rounded LP Standard 90's.
The difference in the grip, the sensation is "highway", an invitation to fast plans, etc. legatos.
Otherwise, it's Les Paul, though with some peculiarities: a weight more "light", and sounds more typed with its microphones, designed to better adapt to very large rate saturations.

Clearly, this is not a les paul because it is not suitable for jazz (yes). It displays a character, however rough, but subtle styles for blues, rock hard. Not surprising given signature.

The pickups are not too bad in the light but tend to quickly crunch (it will play knobs). It lacks the warmth and roundness standards (for my taste), but I think the same of new std. Many teeth. The middle position, with the reversed pick up, however, allows sounds interesting.

Saturax mode: wow! There is no photo, she is at home, whatever your level of saturation. The bridge pickup is bright and sharp (perhaps too much, I had replaced with a more civilized Seymour) and the attack is always transcribed and development. As the neck pickup ... Except that ... This is nirvana! all those who have attempted the solo saturated position on the old LP sleeve include: due to the wiring and the reversal of the microphone, is recovered from the bite and definition, even at levels of saturation prohibited. Achievements and guarantees fantasies santanesques mooriens. You will no longer attack you with this solo microphone: amazing.

Finally sustain: I happened to take over a minute on some notes and a decent volume (not too low either). And yet, it's me that I stopped (that long, one minute to re ...). I've never seen it anywhere else! This is probably due to the fund, the choice of mahogany lighter, but more resonant. It is also probably the reason for a clear sound less appealing.

Finally, this guitar plays this with ease, the notes come out by themselves, as if Gibson had put a little bit of his Ibanez Les Paul.

I used a good year before having to sell it to issue gold coins (as my standard, sniff). I admit that I liked still my standard for comfort (it's really subjective) and greater versatility. Now I'm doing blues rock, I really miss it (I took one for Bacchus Duke Standard, which provides really good). But it is too typical that I plan to put that price (I had bought new, hence the problems of Thun).

Please note: the price was that of a standard at the time. The Argus at the time of resale was 2200 euros, but it has to due from 2000, which seems more consistent when the condition is mint. It is not really collector side as, despite its rarity (as Joe Perry for that matter) and quality.

Finally, I had one big gene with respect to this instrument, that was beautiful ... It has only two concerts, and I was panicked at the thought of him fucking a pet. To understand, you can see a photo of the maple table in my profile (photos). And it is I who took this picture of Gary Moore MA. Unbelievable, huh?