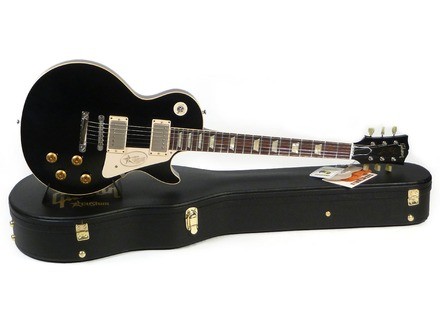 Gibson 1960 Les Paul Standard VOS
4
The Gibson Custom Shop Historic 1960 is a replica of the original guitar made back in 1960. The guitar has a mahogany body with a maple top, mahogany neck with a rosewood fretboard, Tune-o-matic bridge, 22 frets, block/trapezoid inlays, a pickguard, two humbucker pickups, two volumes, two tones and a three way switch.

The 1960 Historic Standard is pretty much where the Historic series starts leveling out, in my opinion. These are the regular Standards that most people know and love from yesteryear, but they seem to lack the vibe the older ones have. The fretwork was good on this, and the nut was cut correctly. However, I think the neck angle might have been off by a touch. I didn't have any way to measure it, but it looked a little different. It could have just been this guitar or my eyes. I'm not entirely sure.

This sounded pretty good, but it had the standard Gibson pickups in it. I'm generally not a huge fan of Gibson pickups. Personally, I prefer the JB/59 combo in these guitars. The stock pickup in this was medium output, and it had some girth to it. You could get a really cool classic rock tone going on with this thing. The neck pickup was a bit too bright for me. I like a fat and singing lead tone, and I had to use the tone pots to help bring down the treble. That, however, generally leads to the sound being a bit muffled from what I normally like.

These are pretty solid guitars, but I feel the older Historic guitars are a bit better in terms of overall vibe and mojo. The guitar is solid, and it sounds nice, but I prefer some different pickups in this thing, personally. All in all, be sure to play one and see how you like it. If you buy one, I would recommend buying one in the store instead of on eBay or something.
Did you find this review helpful?yesno
»

Gibson 1960 Les Paul Standard VOS
5
It is 2003.The wood is mahogany blond.Les microphones are drunk and the ability of Sprague.

The handle is fine and agréable.Elle is a bit heavy but the sustain is good and the dynamics are increased.

I replaced the microphone by an acute P94 for a more bold and less heavy.La middle position sounds a bit like Albert King or close to the sound of Peter Green as the P94 is wired out of phase (only the middle position) . Micro serious sounding "warm" (a little jazz). The sound of the microphone is ideal for acute bottleneck playing the mick taylor.Et course I plug this beauty in an old marshall plexi 1987.

I tried but I ^ I with a handle 59, I have not seen any difference flagrante.Je bought him a blow on the heart and I do not regret what choix.La rating from argus seems a little weak, but hey I bought it to play not to speculate ...
Did you find this review helpful?yesno
»