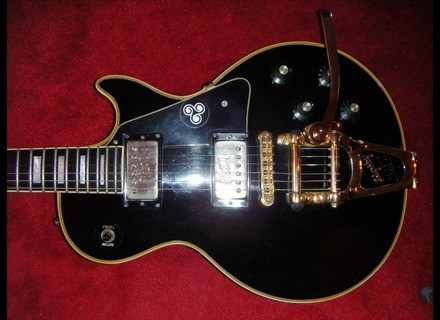 Gibson Les Paul Custom (1971)
4
A lot of people totally dismiss the 70s era Gibsons, and there's a fairly good reason for that. A lot of the Norlin era Gibsons were pretty iffy in terms of quality and tone, especially with the pancake bodies. However, there were some amazing guitars to come out of this era as well. The guitar features a mahogany body with a maple top, a mahogany neck with an ebony fretboard, 22 frets, block inlays, binding, tune-o-matic bridge, two humbuckers, two volumes, two tones and a three way switch.

The guitar was worn fairly heavily, and considering its age, it's kinda normal. The paint was startling to just flake off due to all the wear, and there was a huge mark on the back where someone had to have worn a studded belt or something to wear it like it's worn. The neck's finish was also mostly worn off. The frets on these were small, and it needed a refret as the current ones were pretty much dead. The nut was replaced by a brass nut, and this was obviously done in tribute to Sykes. It delivers a pretty cool tone, but it's kinda "pingy" at times because of that. I generally prefer a bone nut.

The guitar had some EMGs installed in it. In the neck was an EMG 60 and in the bridge was an EMG 81. The EMG 81 in the bridge was absolutely stunning for high gain. It delivered crushing tones without any issues at all. The biggest problem is that it lacked dynamics and versatility. While it killed small children within a 10 mile radius with the high gain, it couldn't do much besides metal. The EMG 60 was much the same way, but the 60 has an awesome clean tone that you can get out of it. I generally prefer the Alnico version, but the Ceramic version is cool as well. It can be slightly sterile, but it's kinda how the EMGs naturally sound. Mid gain tones sucked on both.

If you're going to buy one of these classic Gibsons, you really need to go out and play it. They vary so much, especially during this Norlin era. There are some absolute gems to be had, and my favorite Gibsons are mid 70s Gibsons, but so many are dogs that it's very risky to buy sight unseen...or unheard.
Did you find this review helpful?yesno
»