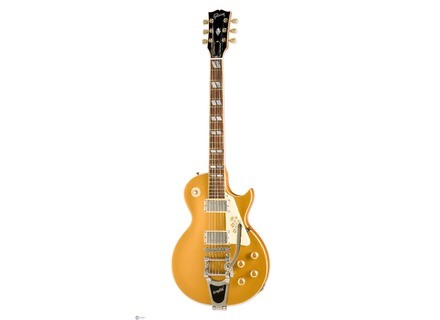 Gibson [Guitar of the Month - April 2008] LP-295 Gold Top
5
The Gibson Les Paul guitars are fantastic instruments have a lot of character to play around with. This is the guitar that features a Bigsby bridge tremolo system. This allows you get the tone of a Gibson Les Paul but being able to have a little bit of versatility by taking the big speed tremolo and having that feature as well. The gold top is a beautiful gold top and it's really rich color and mystique. In this guitar you had to Gibson PAF humbuckers that really pronounce that 50s style tone. Another great cosmetic look is the double block pearl inlays in the frets. Usually you would see only a single block inlay but the blocks are doubled in each fret that it is used.


This guitar was made back in 2008 and they were only are about 1000 of them made at the time. They're not that hard to find but certainly a decent guitar if you can find it.
The tone of it is very Gibson Les Paul but you're not can have that true solid sound that you would with a fixed bridge. Since this is a floating bridge you're going to have that cool lack of sustained in my opinion.

The tone of this guitar sounds great and sounds pretty much like any Le Paul that you ever heard but a little bit thinner and a little more towards the Gretsch sounding guitars. That means that it's can have a little bit of a hollow tone but not quite what a hollow body would sound like. Primary is probably getting because of the bridge fixture that you get that tone and fuel from.


Overall it's a cool guitar if you can find one on the used market then there worth picking up if you really like the Bixby bridges. If you can score one of these I would take this over a Gretsch for tone wise. It won't have that robust hollow tone but the tremolo in a nice feature to have on a guitar of any kind.
Did you find this review helpful?yesno
»

Gibson [Guitar of the Month - April 2008] LP-295 Gold Top
4
GIbson set out to create a design that was kind similar to the ES but with the tone and playability of the Les Paul. What they decided to do was to put a Bigsby on their regular model and adjust a few minor things. It was met with some iffy success due to the fact that it had the trem on it. The guitar features a mahogany body with a maple top, mahogany neck with a rosewood fretboard, 22 frets, special inlays, pickguard, binding, Bigsby bridge, two humbuckers, two volumes, two tones and a three way switch.

The guitar had some weight to it which I wasn't really crazy about. I have a bad back, so these heavy guitars can be a bit of an issue for me. I also find that the heavier guitars don't resonate quite as nicely as the lighter ones do. The frets on this were nice and level. The edges were also nice and rounded off so they don't cut your hand when moving it up and down the neck. The bridge on this is something I'm really not a fan of, and I could never get into these. The nut also had some issues as I would constantly go out of tune with this, even with the strings stretched. Some graphite fixed it, but it really needs to be reshaped for the trem.

I always found that the Bigsby trems took something away from that Les Paul sound. They seem to sound a bit flatter or something. I could never really jive with them like I could with a regular hard tail bridge or even a floyd rose. The pickups in this were the stock Gibson pickups, and they sound average. I'm not a huge fan of these, as I find they lack the qualities I tend to look for in pickups. I generally replace these with the JB/59 combo, but you may prefer the stock pickups yourself. The guitar sounded nice and resonant, so no issues there.

If you're a fan of the Bigsby trem, definitely check these out. I'm sure you'll love it. However, I'm not the biggest fan of those bridges. I just can't really get along with them, and I'm a trem player at heart. The guitar itself sounds pretty cool, so if you buy one out of curiosity, I doubt you'll be disappointed.
Did you find this review helpful?yesno
»

Rinaldo76's review (This content has been automatically translated from French)

MANCE Parfet (IF YOU LOVE THE HANDLE GIPSON)
PEAS THE CONCERN IS THE BIG LP
THE GUITAR BIGSBY ... OUT OF TUNE TRS OFTEN IF YOU PLAY ALL THE CONCERT ... RETUNE 2 PIECES. YOU LOVE OR NOT. (IT GIVES LIVE VIBRATO EXTRA, May HE NEEDS A LITTLE PRACTICE)

THE SOUND IS SURPRISING; IT IS NOT AN HISTORIC OR CUSTOM SOUND May Develops A RETRO-ROCK (PIK UP 57 + 57 NORMAL SO) BLUESY FULL HOT. NO exaggeration, IT IS NOT AN HISTORIC COLLECTION OR A CS, May NOR ANY STANDARD. TONALITER THE MOST TO THAT OF THE SUPREME.
Convien: ROCK, BLUES, JAZZ (in moderation) FOR HARD ROCK ... IF YOU WANT May NOT HIS 1ST JOB TO MY OPINION.

I DID FOR 6 MONTHS
IT MY OPINION N4EST NOT GOOD AS First GUITAR BECAUSE IT IS NOT REALLY VERSATILE, NOT SURE IF YOU N4EST GENDER MUSIC YOU WANT TO PLAY THE LP 295 N4EST NOT YOUR GUITAR.
YES I HAVE TO TRY 10ène MODEL, THE TOUTS GIPSON (A TASTE MY TOP OF THE TOP, CA May ONLY A MATTER OF TASTE WELL SURE)
REPORT QUALITY PRICE IS REALLY GOOD TRS, NOTHING TO OR IN LIVE WITH STANDARD OR MORE STANDARD PRICE VIRTUALLY May MME.
YES MRS
Did you find this review helpful?yesno
»

Rinaldo76's review (This content has been automatically translated from French)

-Handle is nice
-Access to treble is easy and comfortable
-The shape is very good, and the weight cons ... (like any non-LP "chambered")
-Very easy (a good all-tube amp is very welcome)

She agree very well to my style of music: blues, jazz, old rock.
Fender Hot-road delux, Orange Tiny Terror, Vox AC 30, a can of reverb, the leader, the crunch, the drive + drive.
- Gibson Sound: captivating, bold, full and harmonious at the same time with beautiful and trebble middel.
"I love the sound blouesy (she excels in this category)

-6 Months
"I love the sound, even if it is not a" historic collection "or a" custom shop "sounds much better than the standard or standard addition.
-The Bigsby ... or you love it or hate it. Real problem is that it is not a very versatile guitar ... the hard rock is not really like tea, metal ... not even talking about.
I have not, try a different model 30ene (frnder, Gresch, ecc). In its price is to my taste the best.
-Report Q / P very good prices compared to the rest of Gibson.
Well sure I take even a 2nd time
Did you find this review helpful?yesno
»

Published on 04/11/08
Gibson introduces the April release in its "Guitar of the Month" series, the Les Paul 295 Gold Top model.