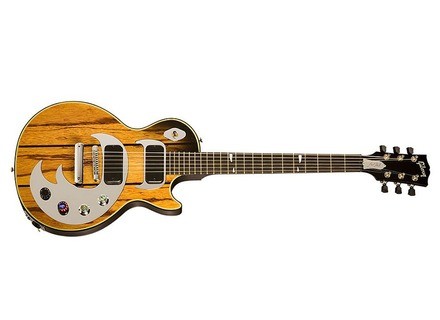 Gibson Dusk Tiger
2
Gibson has been experimenting with different technology lately. This is one of the products of their experiments. This is one of those computerized tuning guitars, and it's something that I'm really not a fan of. The guitar features a mahogany body with a marblewood top, mahogany neck with an ebony fretboard, 22 frets, special inlays, pickguard, binding, hard tail bridge, two pickups, a volume control, a tone control, special EQ, special switch, etc.

The guitar has tons and tons of technology thrown into it, and it's really annoying. First of all, the guitar will tune itself, and you can adjust the tunings you want with the touch of a knob. However, you really need a computer to deal with all of the technology that's thrown in here. I don't know about you, but I don't like to have to sit around a computer all the time when I want to adjust settings and other things like that. I find it more annoying than inspiring. The overall guitar is put together nicely, but that's really about all it has going for it. The guitar is pretty light because they're using chambered bodies, and I'm not really a fan of chambered bodies. The weight relief holes are fine, but once they start chambering them, I find that they lack something in the top end.

The guitar is somewhat sterile sounding. The bridge is actually supposed to be a burstbucker, and the neck is one of their famous P90s. The burstbucker in the bridge is a decent pickup, but I'm not the biggest fan of it. Some people absolutely love them, but I find myself just wanting a JB or Custom. They seem to really suit these guitars better. The P90 in the neck was great for blues and rock, but if you want to play something heavier, you're going to be struggling a bit. There are also tons of different parametric EQ presets and all kinds of other sounds you can adjust, but you need a computer to fully utilize all this nonsense, and I don't have the time for all of that.

The guitar itself has tons of features, and I love that. However, I just dislike the way they're implemented. On top of that, this guitar costs a fortune for what it is. It's only an average sounding guitar plugged straight into the amp, and nothing is really gained with all of the technology they shoved in this. I'd rather have a rack and deal with that than deal with this stuff all in the guitar. That's the biggest gripe I have with this guitar.

olwe telrunya77's review (This content has been automatically translated from French)

Gibson Dusk Tiger
5
Guitar made in USA Mahogany body with acoustic chambers. Hardwood table Mahogany Ebony 2 magnetic pickups (3 positions): - a Burstbucker 3 (bridge) and a P-90 (round) with an additional magnet for suppressing background noise inherent in single coil, Gibson gives them the name of P-90h ... A programmable 4-band Equaliser piezo circuit New LP-Z - This feature is directly inherited from the certainty of Les Paul guitars that should be equipped with low-impedance microphone to achieve high definition sound. Specifically, the guitar has an ID and a multi-output jack that allows the guitarist to select the conventional circuit or high impedance to enable the low impedance circuit. Output jack / XLR Motorsports neutrick robotic ultra-fast finish of rather crude with its very thin nitrocellulose lacquer and matte Gibson made it big on this one. We found a Case MCKII RIP interface (for recording) and several free software (rather expensive) once the registration is on the manufacturer's website (guitar rig 4, ableton ...). Software dedicated to the creation of sound banks is also the game. (Which can be stored in memory on the guitar) it runs on batteries (good, fair to charge the 2 batteries supplied quiet instead of buying batteries 9V ...), plus a charger. Also provided a MIDI cable, a stereo cable, and the beautiful matching case with the guitar. (I would add that the factory setting of the neck, bridge is just perfect) Is that all ...

The neck is super fun, not too big, ultra-precise and hangs a little back. (Mahogany neck, ebony fingerboard) it really gets me going very well, if you like Gibson that will fit you, if not for the hardcore shredders who love the sleeves end type Esp, Parker, Jackson ... you will not find this aspect of "highway". Guitar super well balanced. It weighs his weight (a Gibson does not forget). Access to acute carefree. Is directly obtained a very good sound, even without simulations. In addition there is plenty to explore: create your own sound banks, assign a different effect on each string ... it boggles the mind. Whatever your use, you'll have to wear hand in one guitar.

It is very versatile. It should toutafais the sound I wanted. 2 humbucker, piezo pickups, full simulations of other brand guitars (Les Paul 57 'ES 335 ...), and the natural sound of the guitar, which is great. By varying the volume knobs and tone it also happens to a lot of subtlety in particular on the beautiful vibrated. (Which is not true of all guitars) I've tested a lot of amps with digital technologies, with fewer lamps (only in store). I save a lot in the studio, there is no one type of sound I am not come to do with it. Yet I cast a wide net: Jazz, country, rock, metal, crystal clear sound for arpeggios playboy, simultaneous acoustic ... for me it excels in all, I am far more than satisfied.

Happy owner last week, I love it. I've owned lots of super guitars: Vigier, musicman, parker, jackson, ibanez ... and I finish with this Gibson I do not separate myself. I was looking for a guitar of high quality and ultra-versatile (all styles and for all conditions), so I tried Vigier Gv (fantastique!), the signature Musicman Steve Lukather, a Les Paul Goldtop 57 '... re is known about the tiger dusk charmed me with all these technological accessories, all its sounds, its unique look, and once tried, it's over, it was mad love. I love everything about this guitar, it sounds natural, woods, feel, versatility, technology really serves in everyday use (all types of tuning to be done in 5 seconds, and simulations of guitars legends in a flash it's fantastic), the fact that there are only 1000 copies. worldwide, its looks (which may displease some, I admit it ...), but assumed its futuristic side that respects tradition. 3000 euros ok, it's expensive, but given the quality of stringed instruments, microphones, the piezo technology provided, and opportunities at all, I think it's well worth. I remake that choice without any hesitation. If ever you find one to try, you may dream of the night after ...