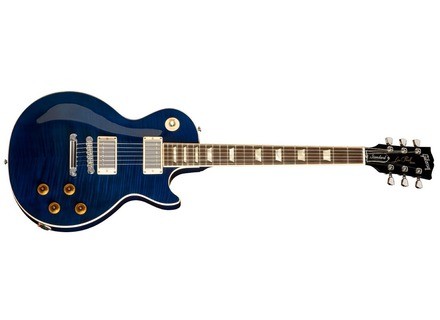 Gibson Les Paul Standard 2008
5
Gibson Les Paul is a fun and extremely versatile guitar. With its rich and deep mahogany wood body and neck this gives this guitar such a great tonal structure when playing with any high gain, hard rock, metal setting. This is the guitar you want to grab when you're playing a solid rock show gig or you need some kind of guitar tone that will be able to a bring a great thick warm tone. This is the guitar that will be that for you. Unlike Fender guitar such as a Fender Stratocaster or a fender telecaster this is a much more warmer guitar and a much more thicker sounding overall voicing. This is a kind of guitar that is somewhat expensive but if you can afford it it's a great sounding musical instrument

This guitar features to volume control knobs and two tone control knobs as well as two humbucker pickups. You also get a pick up select that will give you each individual pick up and the position between each of the two pick ups so you have a total of three different sounds. This is a great guitar for hard rock and metal all way to pop country type tones. This is also great guitar that can be in a drop tuning setting up for the new modern metal players.

The tone of this guitar is pretty stellar and it's sound and its fills the air. These are the kind guitars and many hard rock and metal players would use in combination with the Mesa boogie amplifiers as well as Marshall amplifiers. With a Marshall amplifier it is a match made in heaven. It has a great balance and really compliments each piece of gear on its own. The humbuckers in the Gibson Les Paul are not my favorite and I generally would switch those out if I were you for something much more musical than what they offer in the stock guitar.


At new these guitars come in right around $2600 which is a pretty expensive for most people's budgets. This is a professional guitar and certainly not a beginners guitar for someone trying to learn how to play the electric guitar. This is pretty high-priced but then again this is a very well-built and extremely amazing sounding guitar. I highly recommend this guitar to anyone is looking for good rock 'n roll guitar that will be a benefit in the recording studio as well as anyone gigging actively.

Gibson Les Paul Standard 2008
4
The Les Paul Standard has been updated for 2008. It still has most of the same features that you'd imagine -- a mahogany body with a maple top, a set mahogany neck with a rosewood fretboard, 22 frets, binding, two humbuckers, a hard tail TOM bridge, two volume knobs, two tone knobs, two humbuckers and a three way switch. However, the absolute biggest change would happen to be the new chambered body that they've used in the past with other guitars.

I really dislike the chambering that they did on the new Standard. Without a doubt, it relieved some weight from these things, and that's a good thing. However, I feel it took a hit on tone. I'll get to that later. However, I really like these tuners over the normal Les Paul Standard models. Every guitar should have locking tuners installed, even if it has a floyd. It just makes string changing so much easier. The locking Neutrik jack is also very cool. This model actually has an asymmetrical neck which tapers with the bass side being heavier. It feels much more natural in the hand than most normal necks, and it really adds to the playability of the guitar.

Since it's chambered, it tends to sound "airier" than the old Standard. To me, that's a minus. It can sound good on strats, but Les Pauls are supposed to sound thick and huge. This has a softer top end and looser bottom end that leads to everything sounding not quite right. They also used a solderless pickup system or something in this, so replacing pickups generally means you're going to replace everything. That's not a huge deal for me, however, as I dislike the stock Gibson pickup and electronics.

If you're looking for a Les Paul Standard, I recommend checking out the older models or the new Traditional model. It's a much better sounding guitar without the chambering. They sound tighter, thicker and just overall bigger. When shopping for a Les Paul, never forget to check for both tuning stability and fretwork as those are generally the two biggest issues with these things.
Did you find this review helpful?yesno
»

be23's review (This content has been automatically translated from French)" My number one ..."

Gibson Les Paul Standard 2008
5
Solidbody guitar made in the USA, the Les Paul is equipped with two microphones Burstbuckers Pro, two tones, two volumes, 3-position selector entirely conventional and locking tuners. The neck and body are mahogany, rosewood fingerboard and flamed maple top.
The handle is called "asymmetric", ie more C-shaped end side ropes acute and more serious side potbellied C strings. Anyway, it is rather thin (but not too much, it is not an Ibanez not more), and is probably the most comfortable I have had in my hands handle (which is very subjective).
The 2008 version has a body that has "room tone" that have been much, much virtual ink on the forums ...
According to Gibson, these recesses are designed to reduce and balance the guitar, but also add more sustain.
According to a number of guys on the forums (some of which are so active that one wonders if they play music from time to time ...), the current timber is of poor quality and do not dry long enough, and suddenly they are heavier than the wood of the past (the famous "before it was better"), where the holes to lighten the whole.
From my point of view, to have tried both models, the current Paul are actually lighter and well balanced. It certainly there is a slight difference in sound (a sound more "open" on the current models, especially noticeable in the clear coat), without it being obvious either.
To sustain is kif kif, the recesses bring nothing but detract either.
All that can be read on the other, in my opinion, it's bullshit, not to say of masturbation ...

Given what is said above, the guitar is light, balanced, and provided with a handle that is a model of comfort.
Access to acute is consistent with what one would expect from a Les Paul, ie freestyle.

Fat, full, warm, powerful, round, these are the adjectives that come to mind to describe the sounds that offers this guitar.
The pickups are simply outstanding in my opinion, they have both a vintage grain magnify sounds clear and light crunch (mention A + to neck pickup), but their magnet Alnico V also allow excesses high Dantesque gain, the microphones cashing unflinchingly huge saturation rates, keeping a good accuracy in all circumstances, coupled with the subtly delicious fat enveloping sound.
Plugged into a two Orange body just trembles if you push the distortion, a powerful, warm and always register with a vintage identity. It seems that around the guitar and the amp may collapse, great!
The pickup is slamming solos become intelligible in all circumstances, and rock rhythms are still unstoppable. Its clear, the microphone is less at ease, but you can still learn things quite friendly.

This is the guitar that I know will never part (unless you my pic)! I sometimes use others to vary or repeat try, but I always come back to my Les Paul.
It seems there are very poorly finished or poorly adjusted, this was absolutely not the case with mine (I got it new). Its cosmetic condition was impeccable, finishes adjustments.
In my humble opinion, his reputation is well deserved. Its price is clearly prohibitive, but the sensations it provides are unique.

Qill's review (This content has been automatically translated from French)" mouais ....."

Asymmetric handle: it's not as big as a handle 50 and handle 60 as fine as it is a mix of both, comfort? I have not really felt more is good but not transcendent, it's not a Wizard neck with Ibanez
The room-tone sen knows how to make the guitar lighter, like I have not felt it to be lighter than a Traditional, you can not pass from one to two
The mechanical self-locking are no utilities were always the famous de-tuning on the G string, the nut is to be revised
The Neutrik locking jack, without interest, it's more a gimmick than anything else

The room tone gives a little something after one likes or dislikes, I remain puzzled, empty the guitar sounds good but once connected it's a little disappointment, surely ought to Burstbucker Pro? being a regular on the Les Paul Classic 90 (full room) and Tradional (hole room) I prefer the widely Tradional 50 or 60 equipped with the Classic 57 and 57 +, the Standard of his aptly named it ' is very standard we do not feel the stuff that makes you get into the shoes of Jimmy Page, Kravitz, Joe Perry ... this bluesy rock aggressiveness this vintage dusty depths of his bourbon and Tennessee with the side that stains like greasy cheeseburger bills, it's happening everywhere very versatile, it lacks character as Babybel or Laughing Cow nothing to do with good old Rock-Fort
It remains none the wiser, as the group looks gentle way of life: it's not spit but it's not the same ...

as they come out in 2012 found the Standard model from 2008 to 1800 € instead of € 2200 is too expensive for what it is ... I had my Traditional for less than that
Other surprises electronics, microphones are plug jack on the whole in a printed circuit changed for mics or knobs it's a pain ... must be found the bases, just like the change not hurt anyone else or for more crados ago ear cleft (wired connection) so, I abandoned the idea of ​​the switch Burstbucker 2 & 3, at risk of becoming unsaleable in time given the number of changes
I took out of the 2012 for me to take this guitar, in the end a new experience rather brief since I sold it, I prefer the Traditional 50/60 and Classic 90

Did you find this review helpful?yesno
»
Read the 8 user reviews on the Gibson Les Paul Standard 2008 »