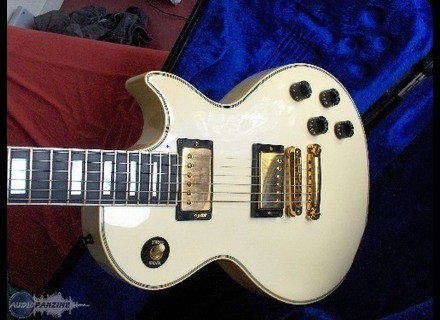 Gibson Les Paul Custom (1985)
4
This is just a few years after Gibson started to weight relieve their guitars. A lot of people had issues with the weight of the Norlin guitars, and as a result, they decided to change their overall construction. Starting around 82 or so, they added 9 weight relief holes, and just about every Gibson from here on out features those 9 holes. The guitar features a mahogany body with a maple top, a mahogany neck with an ebony fretboard, 22 frets, trapezoid inlays, binding, a TOM style bridge, two humbuckers, two volumes, two tones and a three way switch.

The finish on this was aging nicely. You had a cool, slightly yellow finish going on with this thing, and it looked a lot like the one that Randy Rhoads used to play. Considering that I'm a big Randy fan, this was a plus for me. The fretboard on this was nice and dark, and the inlay work was done properly. The frets were decent on this, although it could have used a fret level to get the action to where I wanted it. The nut was recently replaced, so there were no issues there. I forget the stock material they used, but the previous owner put a bone nut on this one, and it happens to be one of my favorite materials for nuts. The rest of the guitar is what you'd expect from Gibson.

A lot of people around this time were very worried as to how those 9 holes might affect the overall sound of the Les Paul. To be honest, they don't really affect it in a negative way. You have a lighter weight guitar, which is a plus, but you don't have the negative tonal effects...another plus. I should note that these 9 holes are NOT the chambering that Gibson has started to do on the Standards, and that most people who have played a Les Paul have most likely played a guitar that had these 9 weight relief holes in them. The pickups in this were stock Gibson pickups, and I'm not the biggest fan of them, but they work for blues and hard rock. I'm more of a metal player, and I tend to prefer slightly higher output pickups with more clarity than what the Gibson ones give, but it's all a matter of personal preference.

These are some pretty killer guitars, and I don't even think people today complain about the weight relief holes like they used to in the past. Most people tend to realize that they don't have a negative impact on tone. If you can find these guitars at a good price, buy it, but just be sure you're not buying a fake. Be weary of eBay sales as a lot of them are fakes.
Did you find this review helpful?yesno
»