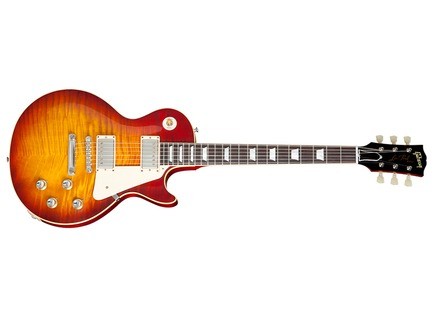 Garcymoore's review (This content has been automatically translated from French)" Extraordinary"

Gibson 1960 Les Paul Standard Reissue 2013
5
Mine is 2012, but it applies equally to the 2013 which is supposed to be even better.
The handle is not too late, just a 59 refined. Must be v2 but I'm not sure.
In any case it is perfect, finally me personally I hardly feel the differences sleeves on Gibson.
The specs that make the difference with a standard model still deserve to be mentioned:

The long-tenon
Full-body
-Mahogany are lighter (if you do not take into account years of production since the Standard models have a wide variety in the quality)
The knobs CTS-
-Mechanical, well actually it is mechanical Gibson! They take very good agreement and are very flexible and precise enough. Anyway I see a big difference with the Standard I owned ...
-The condos are expected to be Bumblebees but there is a conspiracy theory as what they are false, but that does not matter because they have the same characteristics ...
-Some aesthetic differences that reproduce a model of the 60s, such as knobs mirror, tilt of the head, the height of the microphones, the orange color selector.

The handle is very nice not to worry, the action is decent but it is obviously not an Ibanez. Can have a rapid action by making a small compromise on the buzz so that not too frit strings.
This is a very nice instrument as a whole.
Access to acute is well known, it takes a little practice, but nothing insurmountable.
The weight is variable but the CS is not too exceed 4kg (4.1kg mine)
The sound is a real massacre.

Sounds amazing. Gibson deserves its myth.
I had two standard that disappointed me in one way or another, there was always something that was wrong.'s Custom shop is live another dimension.
So maybe I was lucky or maybe rather unlucky with my standards, but in any case the 60 I have is a marvel.
The sound is almost acoustic, it's already a pretty disconnected. Means good violin and other components interact with the strings. This is woody, warm ... It's not a breadboard.
Once plugged into a good amp, this is nirvana. Micro are really creepy. Yet I do not like the Burstbuckers at the base, but I almost feel that it is not the same as on standards. Anyway they transcribe perfectly subtlety of this guitar. Very hot or very round sharper keeping the typical fat. really perfect.
As clean as it sounds pretty jazzy bluesy for Burstbuckers it made me happy.
The bridge is slightly edge is very percussive with just the right amount of good fat, too much or not enough. I do not even consider to change it useless.
It attacks all styles carefree with a good vintage base for the most demanding styles.
Nikel this guitar really, love.

I have a few months, got it secondhand at a nice price but I think they are very expensive. Ca is the no doubt, but it is hoped that the production offers a consistent level of quality, because that at this price, we do not have the right to error.
Still, Gibson still manage to silence his critics with shovels like that.
So you have to put the price and personally I have no confidence in standard models, and then it's my first CS so I can not say but the custom shop it looks to be serious.
Try disconnecting it is at once an idea. No need to be an expert is sharp and clear.
Did you find this review helpful?yesno
»