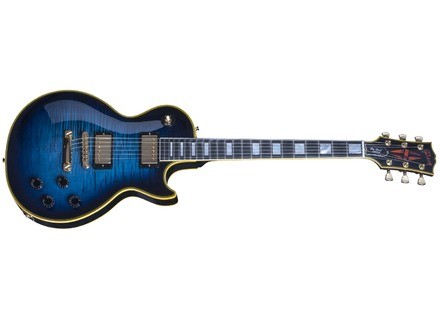 Gibson Les Paul Custom Figured
4
Gibson released a few of these guitars. They're specially made figured top Customs with some unique inlays on them. They almost look like Premiums, but they're not exactly the same. They can be a bit hard to find today, too. The guitar features a mahogany body with a figured maple top, mahogany neck with an ebony fretboard, 22 frets, special trapezoid inlays, pickguard, binding, hard tail bridge, two humbuckers, two volumes, two tones and a three way switch.

The one thing I was a bit disappointed in was the flame top. I've seen better flame tops on PRS guitars and other manufacturers out there. The flame on this was very tight, but it didn't pop nearly as well as certain other flames I've seen. Given the price, that kind of sucks. The fretwork on this could have used some work, but it wasn't too bad. It was roughly what to expect from Gibson. The nut could have used a little attention, but it wasn't a big deal; graphite could fix it. The binding on this was nicely done, and the inlays that they used on this guitar were really cool. It's a bit of a break from the classic trapezoid that you normally see, and it gave it some extra class that you wouldn't usually expect.

The guitar had the stock pickups in this, and they're your standard Gibson style pickups. Normally, Gibson Les Pauls are very thick sounding. This works great for most styles of music, but sometimes it lacks a tad bit of clarity for genres such as metal, especially once you start tuning lower. The ebony fretboard on this guitar helps add some sizzle and bite that allows the guitar to cut through the mix without sounding thin. I'm not a fan of the pickups, so I always replace both those and the pots. This really opens up the guitar and makes it not only more aggressive but more versatile as well.

The guitar is pretty nice, but sometimes these guitars need a bit of work after they come out of the factory. It's sad to say considering how expensive they can be, but that's just the way they are. Not everyone wants to spend an extra few hundred dollars for a proper setup, and if you don't have that extra money, you might want to look into playing before buying. If you buy used, just be ready for potential surprises.
Did you find this review helpful?yesno
»

Published on 05/20/15
Gibson has unveiled a new series of signature and reissue guitars for collectors and aficionados for exception instruments.