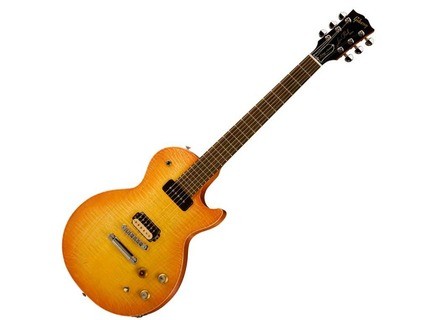 Gibson Gary Moore BFG
4
This version of the Gibson BFG Les Paul is made as a signature model for noted rock/blues guitar virtuoso Gary Moore (R.I.P!) who played in noted bands like Thin Lizzy as well as on his own solo material. However, aside from it being called a Gary Moore signature, it doesn't really have anything about it that makes it that much different from a regular BFG. It features all the same specs as a regular BFG (mahogany construction, rosewood fretboard with 22 frets, P90/Burstbucker pickups and an electronics layout with two volumes, a master tone, regular pickup selector switch and a killswitch.

The guitar is not really any more or less ergonomic than most other Les Pauls I've tried. It is chambered like 90 percent of LPs nowadays, so the weight isn't as bad as some of the heavier LPs like the Traditional or the Custom Shop reisues. However the issues of the neck heel and clunky design aren't any different, so if you aren't a fan of that general design this guitar won't be an improvement. The upper fret access is decent, but not as good as a nice superstrat type ax.

Getting a decent sound out of this guitar isn't difficult. The P90/humbucker combination provides a decent range of tones that differ from a standard Les Paul and the killswitch is great for modern effects too.

At its core, the guitar sounds like a Les Paul should. It has the typical low end girth that is the mark of a Les Paul, and the thick nature is there whether you are using the P90 or the humubucker. The P90 covers some great jazzier/bluesier sounds and has a grittier and slimier sound than the humbucker, which is tighter and more articulate. The two of them make for a pretty cool combination overall and it allows a best of both worlds sort of scenario for players who love P90s and humbuckers both in their Les Pauls. This is true for both clean tones as well as tones ranging from mild overdrive to heavier distortion settings.

All in all the Gibson BFG Gary Moore is a nice guitar for someone who wants a slightly more classy looking BFG guitar. It's not really different tonally wise compared to the regular BFG, so you're basically getting this one for cosmetic reasons or because you're a GM fan. Either way you can't go wrong, as the BFG is a great stripped down Les Paul anyway.

Gibson Gary Moore BFG
4
Along with the normal BFG, there is also a Gary Moore model, and I find that these not only look better, but they tend to play better as well. The guitar features a mahogany body with a maple top, mahogany neck with a rosewood fretboard, 22 frets, no inlays, pickguard, binding, hard tail bridge, two humbuckers, two volumes, one tone, one kill switch and a three way switch.

The first thing about this guitar that really stands out is that the flame on this pops out a bit more than some of the other models. They're generally solid flames, but I've seen other guitars with better ones. Even Jackson can have more intricate flames. Then again, it all depends on what you're going for. The nut on this was cut properly, and I had no issues with tuning. The frets were dead on, and the edges felt great. I really dug how this guitar played, and it had a nearly perfect weight, weighing somewhere around 8 to 9 lbs.

The guitar sounds just like the normal BFG, to be honest. There's not a huge amount of difference. You have the humbucker in the bridge, and it delivers a very cool, fat, overdriven tone. It works great in cranked Marshalls, and it really comes alive under gain. However, I wish it had a bit more clarity and punch. The P90 in the neck is awesome for blues lead tones, and you can get some really great cleans out of it too. The kill switch is kinda useless, but if you're a Buckethead fan, you might enjoy messing with it. I find I can get a similar sound with adjusting the individual volume knobs.

These are more consistent than the regular BFGs, but they're also quite a bit more expensive. I find they look nicer, but sometimes the flames on these can be a bit lacking. The setup from the factory was alright, but I'm more of a fan of lower action, so I find myself lowering it on all of these guitars. Regardless, check eBay to try to find a cheap one, but watch out for fakes.

psycheblues's review (This content has been automatically translated from French)"Gary Moore? No!"

Gibson Gary Moore BFG
5
It is marked Made In USA, so I think it&#39;s USA made, but my luthier told me that some parts had probably been produced in China, but that is not a bad me-t it says because of his experience in recent years sleeves USA would rather see to it ended badly, with peaks and valleys along the entire length. I trust him, it&#39;s his job

Channel type 50 &#39;Mahogany one piece (a Mahogany variety that brings a little more its still hot) with a Baked Maple key as it says on the site, I do not know what it is: S
It has 22 frets and a 12 "radius.

The guitar is very light, which is due to the chambered mahogany body.
This is not the sound of the Les Paul, but I think it is made for it, he has only to look at her.
And BFG is short for Barely Finished Guitar, in translation: "Guitar barely finished).

Then the guitar to a handle type 50 &#39;so it is a bit wide and thick, but compared to a Les Paul-type normal to handle 50&#39; is thinner because the fact that there was no finish removes some thick.
Before I buy this guitar I played on a Stratocaster Classic Player 60 &#39;(check this guitar is a killer). And when I took this one in hand I was conquered on. The handle seemed nice, it slid very well, the key is perfect.
Little more body finish that gives an impression of crocodile skin orange, very nice and pleasant to the touch as well. No varnish over so that the guitar will relic look very quickly, which I think is by Gibson.

While at the controls is simple, the micro switch is in the tone knob instead of the neck pickup, and instead of normal micro switch is a kill-switch.
The Kill-switch is a gadget that is clear. But it can give good effect in solo and then also to "turn off" the sound of his guitar between songs or other concert.
But anyway it is not difficult to return to a standard Les Paul electronics above.

The P90 deserve to be changed for another P90 but better. But all of the P90 there are no exceptions!
The pickup, a Burstbucker III wants to imitate the sound of the original PAF is great for me, no complaints above.

So there! Big question! Why Gary Moore?
I mean, this is a guitar made for Rock, Blues Rock see, but in no case of Gary Moore.
The sound is not heavy enough, there is not enough to sustain the Gary Moore.

Finally, apart from the somewhat surprising some signature sound is still there, it is not Gary Moore, but it&#39;s really good.
Luckily I did not buy for playing Gary Moore.

So well, the chambered body brings something special, especially for a Les Paul. The sound is dry and sharp, and not as deep and heavy with a Les Paul Standard.
This guitar is built for the Rock, and especially the vintage Rock!

The P90 in the neck is warm and round, with a hint that snap that makes this position a relentless riff machine!
For solo on the other hand is not great unless you want to make the solo American Woman by The Guess Who.
The fact that there have not tone allows no adjustment except the volume so it did not quite versatile. But okay, the whole guitar is not made for it,.

The Burstbucker III, it is dry, sharp, powerful and Blues Rock as one can do it better.
Again the flexibility is not there, but again it is not made for that, this microphone is to the rhythm Rock, Hard Rock, and especially for the solo, soloist friends then you&#39;ll appreciate.
But beware this is the solo Blues Rock, Rock and Hard Rock only, metalheads and fan Satriani really go your way.

And the intermediate position, it is quite surprising, since the sound is very warm, round, dry and sharp, but some medium and low pitched very far.
This position must work well to find a style that allows him to really express. The P90 and Burstbucker III together, I would have never thought of.

So I for 1 year.
I use it every day at least an hour and so far it has all the time suited me, I have never been disappointed noise, aesthetics either, it is very beautiful to look at and pleasant touch.
But against the finish of the guitar from a mechanical point of view are not extraordinary setting in the luthier when the purchase is to be done if the guitar is really usable long-term.
I tried another Les Paul, the Gibson, the Burny and other brands because I wanted a standard Les Paul guitar. and surprisingly I bought this guitar to the blind while I tried several before.
I immediately fell in love with her look! This is vintage without relic, for me it was perfect.

I bought it used a guy for 500 €, so in the end the value for money is pretty good for me, but not new I find very good.

Once again I repeat, this is perfect for the Rock, but for anything else!
If you&#39;re a fan of The Kinks, AC / DC, the Stones, the Aeromsith, Lenny Kravitz, Led Zeppelin, Clapton, Cream and other is perfect.
But all that is not Rock, Blues Rock look elsewhere

Then, the handle is super nice, access to acute is the weight is suitable for Les Paul

Regarding the sounds: OUAWWW! This guitar is simply amazing, both in clean (contrary to what I've read) that distortion. The P90 is excellent, gets super sounds in clean, warm, well rounded and very fat distortion. The Burstbucker he excels in distortion. With a tube amp is a good distortion, this guitar will take you to paradise.

I use this guitar for 6 months now and I wing a little more each day. But I've had a lot of other guitars (strat us, les paul standard ...) and this one is my favorite. In addition, it is simply beautiful but its aesthetic will not appeal to everyone. In short, a great guitar!

Did you find this review helpful?yesno
»
Read the 8 user reviews on the Gibson Gary Moore BFG »