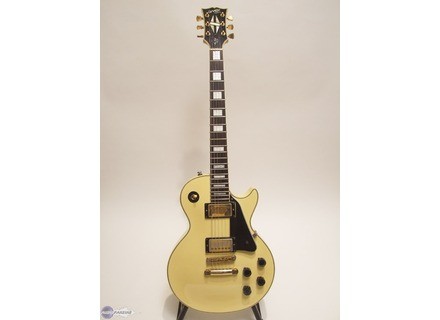 Orville Les Paul Custom
5
We know that some feel the case as a blasphemy ... but Orville By Gibson is the Japanese subsidiary of amricaine firm, it is in every way a Gibson, made from petrol here of rosewood (very beautiful and dense, dark) rather than bne on US models.
A shares, no difference. Ha, IF! no need to leave 5000 as Gibson for a Les Paul with a long tenon, Orville By Gibson (and Orville that matter) possde of the series. Very nice realization.

It's a Les Paul ... Worthy of the name. Difficult access to acute, big enough stick (though less than a Gibson US), relatively heavy guitar ... The charm of LP in short.

VERY EFFECTIVE. I do not see the interest to buy a Gibson US for three times cheaper we all, if it is the prestige of the reputation of the US models. Objectively, the sound is deep, fat, infinite sustain, microphones leave no doubt when the trademark guitar. PAFs that quipent Orville By Gibson sound good vintage, very hot. Note that the knobs are very progressive point very apprciable.

Unless you be addicted to US models and excitement around the brand, Orville By Gibson (I stress "By Gibson" simple "Orville" diffrent level of Electronic and varnish) entirely satisfy guitarists looking beautiful amricaines THE sound. After everything is history purist ...

I compar my Orville Gibson Gibson with US.
Compar a custom LP US 2002 (Model left of a friend, both right-handed, so I speak only of sound), the rendering is almost identical, the US seemed LP Cusom send a little less acute ;dropoff window but overall it sounds as well.
Compar an LP Studio (year ???): Nothing to see. Orville LP is well above; In any case the sound is deeper, less aggressive.
Did you find this review helpful?yesno
»

As said, hyper pleasant handle.
As against the access to acute is not very ais (but we made it very quickly), weight makes me think the Gibson Les Paul Deluxe 1979 I possdais there a few years of this (heavy enough, but we made it, lol)
The right sound? the guitar has a lot, but I think in the first place, the guitarist did most .... (Some people happen to ring any shovel !!!!)
All for me is to feel comfortable and complte communion with my instrument (this is the case with my OBG)

The Orville by Gibson '57 reissue BB should my style perfectly. Between Blues and another ... "Latin Jazz" Santana, it is simply EFFECTIVE, and in fact, this is what I ask.
I did rgler the beast by a luthier who confirmed me a very beautiful violin and excellent sonority and sustain hell.
He adding "shame that it is Japanese." But we do not care whether niponne nor bad (I could not empcher me lol).
I use it on a "Ashdown" Fallen Angel DSP60, a very versatile lamp that makes me not forget my two tri-body Marshall I had in the 80s .... (but hey, we s 'made therein. Although ....)

I add (January 2009) until post a few months of use, the couple "Orville BG" + "Ashdown" is more than good, especially associated supplmentaire a 2x12 Marshall cabinet style 1936, or a 4x12 Marshall 1960 with a compressor and an insert qualiseur in the effects loop ...
What potato !!!! And what sonority !!!
I recently tried everything with a multi-effects Rocktron ... a real killer !!!

I use my OBG for two months, I do not get enough (this is not already so bad, trust me).
I love everything about this guitar, and it's a bit like a woman when you're in love, you do not see the flaws ... she asrement, but I have not found! !!dropoff window

I find the price (dimension) of the "Orville by Gibson" rather correct qualitprix.
I would do without hsiter second, the same choice.

I put a 9 overall opinion (perfect does not exist)
Did you find this review helpful?yesno
»

Orville Les Paul Custom
5
At the risk of some jump ... The Orville by Gibson Gibson factories will be in Japan from 1988 1998 to counter the innumerable copies Japanese often questionable quality of the Gibson Les Paul amricaines.
For the history, "Orville By Gibson until 1993; the" simple "Orville" 94 98 if I do not deceive me. The differences between "by Gibson" and the other is the lack of Orville Gibson pickups on single "Orville" (must include model Gotoh, like the rest of the hardware; indeed, if prvoyez you to change the pickups, no need to invest in a "by Gibson" more chres on the market the opportunity mainly because it possde Gibson pickups) and a shade the composition of the final varnish.

Regarding the violin, it's a Gibson:

_corps mahogany
Maple _Table
_manche mahogany with long tenon: Gibson, only the Custom Shop offers this option, which aims to increase the sustain of the instrument, but it is an argument that does make sense that if the post perfectly seal with its housing in the body, and this is not always the case with Orville, far from. Gibson USA, long tenon or not, the posts are usually very well NSMRI and jointent almost perfectly in their homes. It should not be dreaming, Orville was manufactured chain, you will not even when the assembly quality of Gibson USA Custom Shop ...
_touche Rosewood (and this is the only difference violin with LP Custom amricaine which is the key bne)
_Micros PAF Gibson USA 57 classic
_hardware sign Gotoh, Japanese manufacturing qualitbr />
I put 10 for the characteristics of a Gibson with a finishing degree copy for the price, which is not always the case with Gibson amricaines mid-range ...

What the cot nothing the diffrencie its amricaines sisters ... heavy (often pledge of wood quality), difficult access to acute ... All that's more normal for a Paul ... The defects which are also the charm of the Les Paul ...

"It has everything a great" ... It reminds me of something ... The sound of the instrument is very warm, deep, very full, and quickly becomes dirty in heavy saturation, THE gibson sound .dropoff window Nothing wrong, the sustain is very good. For those wondering, to compare a "real" Gibson USA Les Paul Custom (test performed at a friend who possde a), the sound is barely (A PENALTY!) More fat on the gibson US. I'll let the purists decide about whether it is to the advantage or drawback for Gibson Japan.

Like many, I like (among others) the Gibson sound, but really exagr is the fact dbourser 3500 to pay a premium for a brand that plays a lot (too much) image. Three times cheaper, it is possible to obtain this excellent alternative to amricaines guitars and more for collectors, acqurir an instrument that continues to grow in value. 10/10!

EDIT 2 after two years of use, I am still happy with my OBG, but I see that the prices of the opportunity (forcment ... Production ADOPTED long ago) ascend fl che ... Today for a possder Orville By Gibson, must dbourser the same price as the US correspodante Gibson ... at best a few dozen uros within ... You see collector or not, has become ridiculous ... But still a good guitars.
Did you find this review helpful?yesno
»

Orville Les Paul Custom
5
Guitar made in Japan showing the specifications of U.S. models.
All features of Gibson, with long tenon, binding, full body, this is not an anvil either, mine must be 4 kg. Gibson USA 57 micro'' s origin.
Volumes 2/2 a tone selector 3 positrons on all Les Paul.
The bridge is a version of TOM nashville.

It was a Les Paul of what has more classic, with its advantages and disadvantages. The handle is not a log, but it's not a stick screddeur.
Access to acute takes some practice to get used to it, especially if you have small hands but nothing major, anyway, a pure screddeur does not guide on a Les Paul or a version improved at that time, we know this is not new on the LP.
The weight of the much maligned LP, is not annoying. It was a guitar that ranges from 3.8 to 4.2 kg, some current production at Gibson doing the same with a body weight Weight relief (small holes) Chambered not see dramatic and it has a full body for purists .

This is the sound round and warm like that in clean, bold in distortion. The guitar responds well to different microphones we can paste it as you wish.
I equipped with a kit EMG 81/85 which prevents me from playing in clean or crunch. I like the rendering, especially if the dynamic is played on a tube amp that governs many attacks.
57 The classics give a more fortification, more olmd school just as interesting and failing to have a second, if I Cantonese style mics more retro backgrounds are by far the best choice (excluding pickups shops)

This is a great Les Paul Gibson even very good, some say better than her sisters, for my part, I would think rather that OBG's early 90s are in terms of construction, timber are equivalent except they were manufactured in Japan. This is not a label, and simply plug to be convinced. From what I've read all the models are not equivalent from year to year, it is therefore failing to try a good look at the year of manufacture, the top of the basket seems to be in the early 90s, in the late 90s, the building seems more important with a lighter specification.
A choice again if inflation does not win too certain years of manufacture.

Did you find this review helpful?yesno
»
Read the 6 user reviews on the Orville Les Paul Custom »