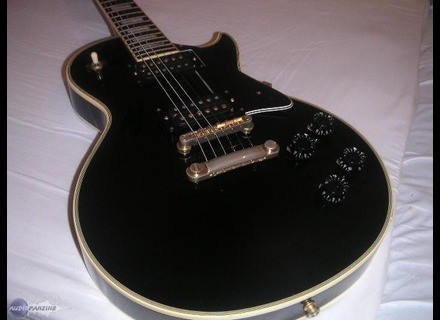 
As you features with Les Paul guitars the features are basically the same. The body shape is cut exactly the same from the features to the tone. The pick ups are pretty much all the same as well as the volume control knobs and tone control knobs. It has a the pickup selector on the top and to humbuckers installed in at the bridge and in the next position. The Japanese built guitars are pretty well crafted instruments. There's a feel quality to them that is very close to the American-built Gibson Les Paul. Even though this is a knock off instrument it still has that feel and tone that you would get from a regular Gibson Les Paul guitar.


If either play to Gibson Les Paul guitar then you know exactly the sound and feel that you would get with this instrument. You get a thick and warm mahogany based tone that is very conducive to you high gain pedals or high gain amplifiers. Overall the sound feel and balance of this instrument rivals very close to her traditional American Gibson Les Paul guitar. It is good to be a budget friendly instruments so if you're not in the market for the expensive version of the Les Paul from Gibson and I suggest going with this guitar.

These guitars are primarily based out of the Japanese market today can be a little harder to find over in Europe and in the United States. However, if you can locate one the nearest good alternative to the higher priced American Gibson Les Paul instruments. These are fun guitars to play and there are great players in Schmidt from gigging or recording.

Orville Les Paul
4
I've played many chambered body LP's in my day and the sustain and tone does not compare to an un-chambered body. I play lots of country and southern rock, country is traditionally played on a telecaster, and southern rock is played usually on a les Paul both guitars will run you well over a grand each, but the split coil design allows you to play like you own both. the tone is orgasmic, and it is one of the greatest feeling guitar i've ever held.


I compared this to a Mira PRS, The Orville Les Paul, and Gibson Studio Deluxe. Mira PRS was thin sounding compared to this but very playable. Fender was disappointing on rhythm and power chords but good on blues riff (it did get good reviews). Gibson LP deluxe sounded good but had a fat neck with gloss finish that made it difficult for my hand to slide up and down the neck. This Orville Les Paul has great playability (satin finish on neck), thinner neck, and unbelievable tone (played through a Blackstar HT-5 combo).

Overall, very versatile like most of the Les Paul guitars are. This guitar will have you playing all different styles of music. This guitar was made in Japan and sound great and is well built. I still own mine, and pull it out from time to time.

ranil's review (This content has been automatically translated from French)

Access to the difficult thing is sharp compared to the strata, but the handle is very comfortable with cons, and finally the weight is generally greater than that of a gibson les paul

She is very versatile, like all the les paul: from blues to heavy rock power

Made in Japan by Gibson (Orville Gibson's first name is) to counter the competitive Japanese (Tokai, Burner ...). It then compares a les paul epiphone elitist or a tokai and has not ashamed to face a Gibson Les Paul

romanee's review (This content has been automatically translated from French)

Orville Les Paul
5
Paul japan 80-90 years
exact copy of a guibson Luter at a jewelry
Not to be confused by Orville and Orville guibson, Difference of the head and finishing
the handle is a much better real jewels That a les paul special present which is too broad.
the microphones are crazy, more than pchus guibson of origin
IDAL for hard rock or hard and solo santana, attention adcolle very quickly and return feedback Rapidos in tearing of the serious

C is actually a rare and prcieux, few people have one, claw by guibson in headstock and hard to find (not like a les paul)
original and very Atach
a jewelry

Did you find this review helpful?yesno
»
Read the 5 user reviews on the Orville Les Paul »