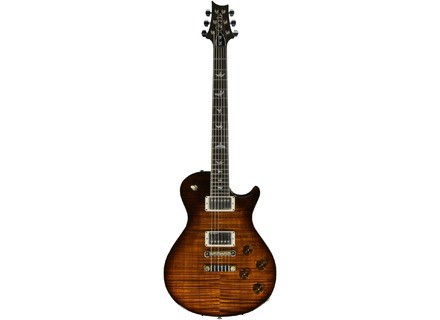 PRS SC 58
4
It seems that ever since PRS won the Lawsuit with Gibson they have been rubbing it in their faces by making Gibsons own guitars better than Gibson does. This is the latest in the line of singlecuts PRS has been putting out. This guitar has even more of a Gibson feel to it. It has the modified PRS singlecut body. The body is made out of mahogany with a maple top. The top has a bit of a flame on it. The set neck is mahogany as well in the Pattern normal or Wide Fat profile. The fretboard is rosewood like most PRS models. The neck scale is PRS's shorter 24.5 inch scale. The frets are 22 medium jumbo with the PRS bird inlays in them. Up top you get the great PRS locking tuners and down at the bottom you get their new 2 piece bridge for even more Les Paul feel. The pickups in this guitar are the PAF style 57/08 pickups. The controls are like a Les Paul as well with a volume and tone for each pickup and a 3 way toggle on the upper bout.

What sets this guitar apart from other PRS single cut models is the two piece bridge. This bridge was designed to give more of a Gibson tone and feel. The bridge also has more adjustment possibilities than the normal wraparound bridge PRS normally uses. This is nice to have but from my experience PRS guitars are so well setup from the factory not being able to adjust the bridge is not that much of a problem. The Pattern normal or Wide Fat neck isnt that super fat. It is like inbetween the Gibson 50s and 60s necks. it is very comfortable and the wider width and flatter radius helps the playability a lot. The 24.5 inch scale gives you a nice easy feel but it can also get crowded on the upper frets. The locking tuners PRS has designed are some of the best. They keep evolving their hardware and are never content to rest on their successes. This is what makes PRS one of the best guitar makers in the world today.

With these PRS 57/08 pickups you get true vintage PAF tone. These pickups are made with the same materials and methods they used back in the 50s to make the original PAF pickups so it gives you even more vintage tone and feel. Nowadays many pickups are super hot and high output. With these lower output more vintage style pickups you get a lot more sensitivity in the sound. The lower output pickups have more dynamics and can be influenced easily by picking styles. With these pickups you get the super smooth singing PAF tone. They have a great sag in the tone that you associate with vintage pickups. They are pretty even throughout the range. These pickups are great and I bet PRS could make money selling these pickups individually in the aftermarket if they wanted to.

Everyone will say PRS build quality is better than Gibsons nowadays but even with that, even with this guitar being a full priced American made PRS this guitar is cheaper than a Custom Shop Les Paul. And with a Les Paul Custom you arent going to get Locking Tuners and the playability that this guitar has. If you are looking for absolutely the best American made single cut guitar money can buy this PRS should be one of the ones you look at. The times have changed and Gibson hasnt really moved with the times. PRS is always advancing their trade and now they are seemingly leading the pack when it comes to quality and technology in their guitars.