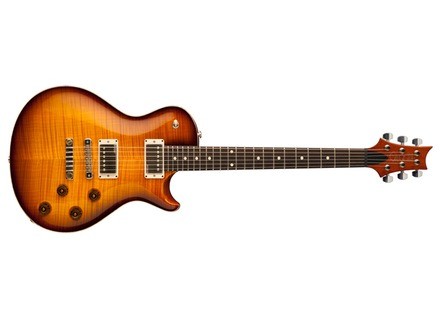 PRS Stripped 58
5
The PRS Stripped 58 is one of their newest models in the line up. It is easy to tell that this guitar is supposed to be like a classic 58 Les Paul. Because it is supposed to be more like a Les Paul it has some parts that PRS doesnt use much on their normal guitars. It is a modified PRS singlecut in design. It has a mahogany body with a maple top. The top has a nice flame on it. PRS always uses good tops on their guitars. The set in neck is mahogany with a rosewood fretboard. The neck is the new Pattern regular profile which is just like the old Wide Fat neck. The neck scale is PRS's 24.5 inch scale they use on their Les Paul type models. The neck has 22 frets and the famous bird inlays. Up top you get PRS's fancy locking tuners and the bridge is one of their newer tune-o-matic style designs. This guitar has their 57/08 pickups in the neck and bridge and the controls are classic Gibson with a volume and tone with a 3 way toggle.

The main difference between this guitar and other singlecut PRS's is the 2 piece tune-o-matic style bridge. This bridge is more adjustable than the normal wraparound bridge they use on most guitars but PRS's normally dont need that much adjustment in the first place. This gives the guitar a more traditional Les Paul like feel which is what the guitar is going for. Since this is a LP style guitar PRS uses their 24.5 inch scale. This is even shorter than a real Les Paul. IT gives a bit looser feeling on the strings and the upper frets are a little closer to each other. With the pattern regular neck, what they use to call wide fat, you get a traditional Les Paul feel but the flatter radius helps the playability a lot.

With the 57/08 pickups if you close your eyes you will think you are playing a Les Paul. Comparing this side by side with a Gibson the tones are nearly identical. The PRS has a slightly more pronouced tone. With a bit of drive you get that classic singing PAF tone. The pickups have that vowel like PAF quality that everyone loves. The clean tones have a nice bluesy spank to them. The pots work very well and you can ride the volume to clean up the tone and it cleans up nicely without becoming too thin.

Even though this is a fully priced USA made PRS it still costs about half as much as a Custom Shop Gibson and I think the quality and tone are better. You arent going to find a Gibson with a top like this. Gibson just barely started to put locking tuners on their guitars. This guitar has the classic sound with all the modern appointments that high end players expect. If you have the cash and are looking for a high end single cut this should be on your short list. With a Gibson a lot of what you are paying for is the name on the headstock. With a PRS you are paying for real quality.

Published on 06/08/12
Originally offered as a limited run for Experience PRS 2011, the “Stripped” 58 is now available as part of the PRS Core lineup.