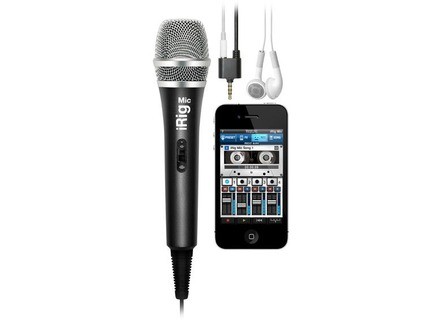 iRig Mic, Microphone for tablet/iDevice from IK Multimedia in the iRig series.

Rosqo's review (This content has been automatically translated from French)

Installation dune extreme simplicity connection directly to ipad mac or by jack, headphone integrated. Ideal for demanding little realization on garage band or other app of its kind. No foot n is provided to you démerde guide! On apple products no dysfunction predict.

Utilisiation for rap and singing very difficult without post production settings on a good mac .. The micro saturates very quickly and deformed the bad voice in the bass in the treble, bad what!

Use for 6 months now purchase very soon a true micro because it is closer to the gadget. It is useful for a small premiereexperience but that's all. I deconseille this microphone.
Did you find this review helpful?yesno
»

Other IK Multimedia microphones for tablets/iDevices