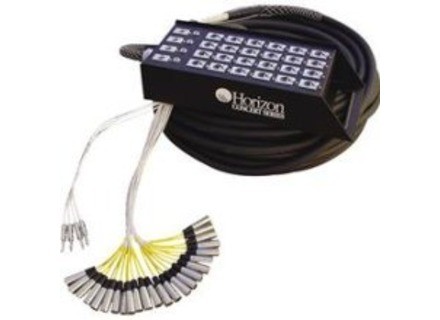 Horizon Concert Series 24 Channel Snake
5
Horizon's Concert Series 24 Channel Snake is a simple yet very sturdy audio snake that can be used in live concert venues or in the recording studio. The place that I've used this snake has been in the studio, as the studio where I'm working has one of these going from the control room to the live room. The panel of the snake is permanently mounted on the wall for plugging microphones in from the live room. While I would think that most users will be using something like this for live sound, the application is essentially the same either way. Of course in a studio it's especially important to have a reliable snake connecting your signals, and this is definitely stable enough to handle this. In addition to the 24 channels of XLR inputs on the snake, it also has four 1/4" returns. The snake does come in a few different lengths, and although I'm not sure what length the one is that we have, I'm pretty sure it's the shortest one since there isn't all that much space between our control and live rooms. On both ends, the snake is built very well and it shows when you plug microphones into it as it doesn't feel the slightest bit cheap. I don't think we've ever had a problem with any of the jacks on it either. The Horizon Concert Series 24 Channel Snake does cost a good amount of money, and there are cheaper options out there for sure, but if you want something that's extremely reliable I'd encourage you to check this one out. Everything that I've used from Horizon in the past has been built well, so I have reason to trust the overall work they do. So while there are definitley options out there, as far as I can tell, this is as good any...
Did you find this review helpful?yesno
»