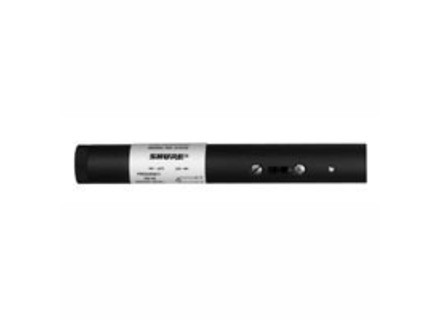 
1 user review
Find it in the classifieds starting at $45 Avg used price: $39

Shure A15TG
5
The Shure A15TG is a simple tone generator that fits in between your mic line. It's got XLR connections on either end and is a battery powered device. The tone that it will generator is at 700 Hz, which of course is strategically chosen since it isn't too low and isn't too high. It also has an on/off switch on it for engaging the tone. That's pretty much everything you'd need to know about the make up of this tone generator, as it's really a simple piece of equipment. The A15TG has a number of uses, but I've used it for checking lines in a recording studio. We have one on hand at the studio where I work, and most of the time it gets used for checking the console, although it isn't really necessary since we can also do it in Pro Tools. I've also used it for scratching a line and making sure that something is coming up. While the Shure A15TG isn't something that's going to be necessary in a home studio or in a smaller studio, it definitely comes in handy in larger professional studios, especially those with real consoles. It certainly doesn't see very much use at the studio where I work, but it's necessary to have around for when we will need it. I was definitely surprised to see the price of the Shure A15TG, as I wasn't expecting it to be as much money as it is. So if you're thinking of picking one of these up just to have, you're most likely going to have to think again because of the price. Having said this, if you absolutely do need a hardware tone generator for your studio, I can't say that I know of any better ones out there other than the Shure A15TG.
Did you find this review helpful?yesno
»