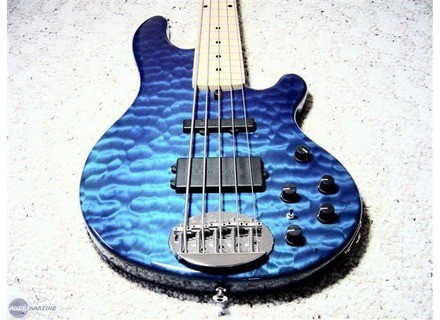 Lakland USA 55-94 Deluxe
4
All maple woods on the instrument. Brilliant bright woodgrain finish on the quilted maple top and back. I got it with Thomastik Infeld Jazz Flats, very smooth but bright for flatwounds. The pickups are a Bartolini Jazz in the Neck and a Bartolini Humbucker in the bridge. Very powerful tone combination. It sports a 3-band active EQ with 3-position mid center switch to change the mid frequency, along with a push-pull active/passive switch on the volume knob and a pickup blend knob. Standard Lakland bridge and tuners. 22 frets. All made in the USA.

I borrowed it for a studio gig with a roots rock group from a friend while my Godin BG-5 5-string was in the shop. Most of my gigs are either rock, jazz, fusion, or musicals, with the occasional reggae job thrown in for good measure. I also play upright bass, and piano is my other main instrument.

I like the finish, and Bartolini pickups are always great to see on a bass. The perfect blend of warmth and sparkle in their tone is what I like to hear. I like that the bass doesn't weigh as much as it could for how big it is. It's also well-balanced. There's a nice space right below the fretboard to practice safe slapping, too. Easy access for the trussrod and battery. EQ is powerful and the frequency points for the treble and bass are well chosen.

The neck is HUGE. The strings might even be a bit too wide for my taste in some spots. I'm getting used to it, but it's still a big difference between what I've played and this monster. Granted, it isn't heavy, and it's balanced enough that it doesn't neck-dive (somehow), but there is a definite learning curve with this bass as compared to others. I wish the selections for the mid-range frequencies were more varied in tonal colors...it seemed like all 3 setting gave me largely the same mid control with a slightly different EQ curve, a barely audible difference.

It's completely sturdy, and it hasn't given it's other owner any problems yet. We both take care of our instruments, and they take care of us.

Don't let the thick neck stop you, but do take it into consideration. It's a great sounding bass, but Laklands are different to play. I also really do wish that the mid controls were a bit more expressive. That's an important variable for a bassist to have control over, and this bass just doesn't deliver as well as it should on that.

Acquired in 2004 from Vintage Bass Trading Co. in Arizona as part of a trade for a fretless Ripper and an EBMM SR5. I had been playing e Korean-made Lakland Skyline 5501 for about two years and liked it so much that I went for the USA-made model. MSRP at the time was around $4500, it's now $4950, Current street price is about $3000.

I love everything about this bass. I've been playing since 1965 and have owned just about every popular bass -- Rickenbacker 4001, Fender P and J, Music Man, Gretsch, Hofner, Gibson, and the original Steinberger XL headless graphite bass. I run the 55-94 virtually flat through almost any amp and it sounds perfect, but it can produce a range of sounds, from P bass to Music Man String Ray. Yet it still has its own Lakland sound. The neck is the best fiver neck I've ever played -- a compound radius that gets thinner as it goes up, so you're not put off by the width of the neck on the upper frets. Spacing at the bridge is the same as a standard Fender 4 string P bass, which I prefer After almost 6 years on this bass, any other neck feels terrible. I recently did a recording session and the producer raved about the 55-94: went straight to the board, set flat, with two-year-old TI Jazz Flats, and it kills. The other bassist on the project used a Sting Ray 4, and no amount of tweaking can make it sound as fabulous as mine (yes, I am proud). The sound is absolutely even from the open B string to the 22nd fret on the G. And the 35' B string is the best I've played.

No negatives, although this was a lot to spend for a bass. But the price compares favorably to what I paid for my then-rare Steinberger in 1982. There is nothing I can say bad about this bass -- or any of Lakland's basses.

Fit and finish, workmanship, and sound on the outdo any of the others I've owned. It's lightweight -- less than 8 pounds, perfectly balanced and beautiful. The birdseye maple fretboard alone is enough to turn heads, but the quilted maple body finish is almost 3D. Electronics are quiet and allow a wide range of sounds. I have never played a bass that's better built.

Although expensive for most players, the Lakland 55-94 is absolutely the best bass of its kind in the world. If you like fender and Music Man basses, the Lakland 55-94 offers the best of both those manufacturers, plus a good bit of it's own magic. For those on a budget, the Lakland 55-02 offers identical electronics and specs that are very close to the 55-94 for about half the price.

alg8598's review (This content has been automatically translated from French)" The divinity of the bass is she? if so do Lakland is not far"

extra flat and thin, although wide (5 CORDRA), a "Highway" to American, placing extremely accurate, ergonomics and absolutely flawless perfect balance in play standing or sitting. Excellent access to acute, many sounds are terrible and a groove is obtained in minutes.

Yes it is an instrument with real soul, snoring and mild, with subtlety. I play with a Markbass Little Mark II and a baffle NY604; punch and precision terrible preamp the bass is there for something. A little difficult to get the good seed of his, because we do not understand the balance settings right away, but when there is ...

I use it for two months, and I put right on the money, I love her personality, like a 4-94 that I play 4-string fretted, instruments that have finally a soul, it's expensive, rare, but they are really worth and I understand why many bassists showbiz use overseas. I remake this choice with your eyes closed, I prefer it even to Alembic (not the same spirit, however).
Did you find this review helpful?yesno
»