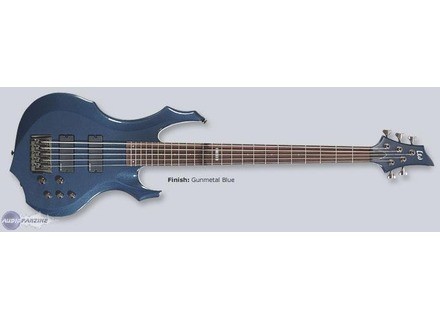 loween's review (This content has been automatically translated from French)

Channel pleasant
access to acute ok, the handle stuck help!
sound in the treble sounds hard, mean well, access is ok
accurate in the bass,
She falls in great, big head a little while rebalancing.
side weight bah c a 5-string bass!! there are lighter but there are also heavier!

His side, but for metal it's good!
it is the finger or a pick, it sounds.

I jous on a large fender repeating, connected directly and set the pots.
I chose a bold and clear without snapping in the treble.

when you go up the bass it sounds very strong.
I play 1 / 2 Low tones, and no worries that borders Bb chord, not a Bb that crushes all other sounds, how balanced.

it's been a month since I have so versatile and other side to wait a bit.
The look of this bass is great.
beautiful marbled red lacquer.

I also hesitate with a Traben 5-string, that sounds good too, but my preference ESP won!
before I had a home BBASSV hohner, friendly but not quite "metal"
on the other hand not easy to find, imported from Germany
.
For now the choice price / quality is always in his favor, by repeating it changed everything!
Did you find this review helpful?yesno
»

Bossdedieu's review (This content has been automatically translated from French)

I see no better, honestly.

- The handle?? Ouaaah! I had a Jim Harley PB60 / s before (see my review, I mailed in error to the sesison raptors_15 ...) And I seem to reach a new instrument is amazing! Fast, smooth, what the class too.

- Access to acute? Should I stop my movement to not exceed the 24th fret!

- In terms of ergonomics, I'd say it's a strato carved with a hammer, although aggressive, beautiful and very comfortable with the concave shape. And the weight! I was afraid of the 5-string ... Ben is lighter than my 4 string! It is a pleasure to play with.

- For sound, well it's EMG. No surprise. His sound is well right of origin. After tweaking its need and its EQ amp but that's another story. Just one slight problem with the Treble EQ, but I would see it down.

The sound may not be truly perfect, then I can not put even 10 but qund.

- The sound that I try to get it easily and I get sound rather cold, slamming, metal anything. She snores well, and I like it.

- I slap her, touched her fingers but for now I'm not too busy to pick my foot (I've since 3am so I can not say more lol and I'm not a pickeux) even though I like his sound.
on the other hand I noticed a slight problem with the Treble of the EQ. When pushed it sizzles and it's not very pleasant. But hey it's not super important if you have something to even out on his amp but it still sucks.

Damage damage to the lil problem with treble and the difficulty in med is minimal but good ^ ^ I put 8.

- The value for money is niquel. It's stuff you can not correct and solid, a huge bridge scared me, a super nice set neck, mouth, microphones correct (the EMG, though! And Hatebreed bassist uses These 40Hz. And since it is a group known worldwide I guess his bass he not bought € 715 to musik-service, I'd rather see three times the price ...), then frankly, I think I made a bargain.

- With experience, I would not say I would do this choice because it may well be great, it's still mid-range. If I had to go far in the world of bass I would go to more sophisticated models. But against I recommend it to anyone to buy a gear ontl'intention correct. This is my favorite, I put 9 / 10. Congratulations and thank you ESP!
Did you find this review helpful?yesno
»