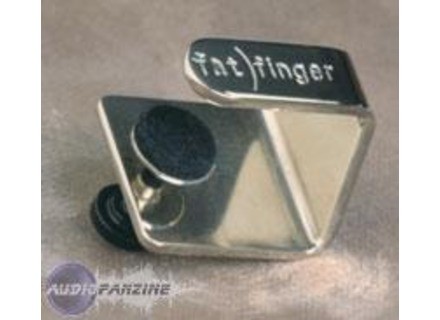 
2 user reviews
Find it in the classifieds starting at $10 Avg used price: $10

Groove Tubes Fat Finger
4
The Groove Tubes Fat Finger is a unique guitar piece that aims to add sustain to your electric guitar.  It attaches to the head stock of your guitar and is supposed to allow your guitar to sustain a bit longer, and I do believe that it does this.  Let me start of by saying however, that I don't believe this is necessary for anyone's guitar, but at times can be a cool gadget to have around.  It was easy to attach to head of the guitar and I didn't find that it feel off easily or anything like that as it stayed in place pretty well.  I can't say the Fat Finger will give you infinite sustain or anything close to it, it will loosen your strings a tiny bit and will make it a bit easier to sustain your strings.  However, if I'm looking for real sustain I will usually use a compressor, as this doesn't have the capability for sustain like that.  It isn't the type of thing that I would use on every song, only on some here and there where I feel I might want a bit more sustain.  The Groove Tubes Fat Finger is cool with effects like reverb and delay, but like I said earlier, it definitley isn't a necessary piece of equipment.  The good news is that it is a very low priced piece of equipment, which is the main reason that I tried it out to see if it could help at times even a little bit.  This is definitely an intersteing concept, as I don't think that I had seen anything like it before I got this one.  If you're intrigued by this at all, I'd recommend just checking it out and seeing if it is something that you might want to use.
Did you find this review helpful?yesno
»

pullrich's review (This content has been automatically translated from French)

Groove Tubes Fat Finger
This is crap !!!!!
Did you find this review helpful?yesno
»