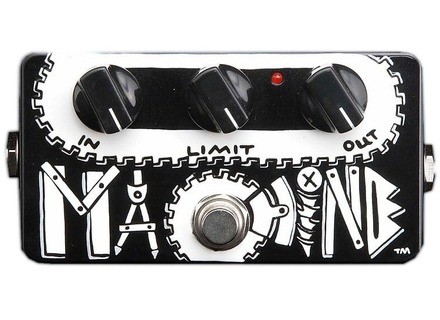 Machine, Other Guitar Effect from Zvex.

View all offers for Zvex Machine »

Zvex Machine
5
Zvex’s The Machine is a unique and disgusting distortion pedal intended for electric guitar. It’s not a cheap pedal as the description of it from it’s makers would have you believe as they literally say that it doesn’t sound good. Of course it’s all tongue in cheek because it’s simply a unique and dirty sound that works well in some situations. I believe that these pedals are hand made, or at least I know that they are made with top quality parts and definitely in boutique fashion since they are also hand painted. You can power it with a nine volt power supply (not sure about a battery) and connect it to your amp and guitar with ¼” jacks. It’s not rackable.

The only parameters that you have to work with The Machine are input and output levelers as well as a limit control. You’ll be able to get a good variety of sounds between these controls, but don’t expect to get a traditional distortion sound with The Machine because it’s simply not that kind of pedal. I don’t think that users will find that they need a manual for this pedal.

The sound of Zvex’s The Machine is dirty, unconventional, and downright disgusting, but I love it! It’s perfect for getting a fuzzy, noisy, dirty sound from your guitar in a way that you wouldn’t be able to with a more traditional distortion pedal. I’d only use The Machine in certain situations, so I’m not sure that it’s going to be worth it for most guitarists out there. In my opinion it’s an awesome studio tool but it’s not something that I’d consider having on my pedal board.

While Zvex’s The Machine isn’t a traditional distortion pedal, it brings a lot to the table in the world of interesting and unique guitar sounds. The price of The Machine is definitely going to deter most interested parties since it costs right around $300 US dollars. Still, for the studio owner looking to be able to capture any sound at any given point, The Machine is worth checking out and considering.
Did you find this review helpful?yesno
»

Zvex Machine
5
In typical ZVEX fashion you get a simple analog box that creates wild sounds.

Input level, output level, and limit which changes how your sound is destroyed

This is about as simple as it gets for a pedal. Plug in like you would any other pedal, get your power whether it's a battery or power supply, twist some knobs and go.

The manual is pretty short but descriptive enough to let you know what's going on. From there it's up to you to figure out how it reacts to your set up.

I use this in guitar set up but have had success with a number of applications from synths to drum machines.

Sound quality is an odd thing to comment on with this pedal. It sounds bad in the best way possible and the Zvex description of "It's primary purpose is to cut through. But like a wild man with a machete, it is not nice." is pretty much spot on. It sounds like a harsh jagged distortion just jumping out and killing whatever sound you had going. You can place any number of distortion, fuzz, or any other pedals after this thing and once you kick it on you will know it's there. And so will your audience. I am a huge Nails fan and after owning this pedal I can finally get some of Trent's nasty distortion sounds.

If I could change anything about it I would add a tone control to tame it just a bit occasionally which would make it useable for a wider variety of people.

This is probably a love or hate pedal as I don't think the sound is something you can be neutral about. If you like to lay down some old fashioned blues then this probably isn't for you and there are a million other distortion and fuzz boxes to get a normal sound out of. The price is a bit steep but I like to support people who step out of the norm and just go with what they want to do. This is not a normal distortion and as far as I know there is nothing else like it.
Did you find this review helpful?yesno
»

Zvex Machine
3
Zvex is usually known for their more bizarre sounding pedals, but this one really takes the cake. This isn't your daddy's fuzz, and it isn't your son's distortion pedal. This is a unique and crazy noise generator that is meant to create some bizarre crossover distortion to help cut through even the densest mix out there. It's pretty simple in that it has an in, out and limit knob. It also has true bypass to make sure you don't lose any of your original tone.

There are only three knobs on this thing, so you'd think it'd be hard to get a "bad" sounding setting, but this is just the opposite. It's actually hard to get a good sounding setting. I'll get to that later down in the sound category, but this thing is truly ... unique. There is a manual for this, but I never bothered reading it because the pedal is so simple and easy to use. Zvex also has some killer video demos of the pedal, so be sure to check those out.

The thing sounds bad, and I don't really mean that in a good way. Imagine the raunchiest, nastiest fuzz out there, and now imagine some bizarre noise that can cut through it. That's basically what the Machine is. It's some weird crossover distortion noise generator with a built-in fuzz to allow you to stand out no matter how many instruments are playing. It's really hard to find a use for this besides in the studio doing some indie punk/grind kinda thing.

You have to be a pretty "out there" person to recommend this pedal, but it's meant for those that are looking for sounds outside of the box. It's not a typical pedal so much as it's a noise generator meant to help you stand out from the crowd and give you that extra boost that makes your guitar signal slice through the mix. It's not a pretty sound, but it's unique. Check out the video on Zvex's site to see what I'm referring to.
Did you find this review helpful?yesno
»

Adri02's review (This content has been automatically translated from French)

Zvex Machine
5
Well ... Here is one of the greatest monsters of the Fast Fashion Zvex. Properly explain what it is not simple, and indeed of the crateur Zvex it even says in his dmo: "No matter if you do not know what it is , plutt Listen to what a deal! "

So we have a "triplexer frequency drives" (the seller has told me and tell me without telling me: "a t'pate when I say a, eh"), with three buttons: a volume of a volume of output and a "limit" the most qu'tranges Properties; + 1 button to enable and disable the pedals (here, small BMOL: not of lights to see if it is on or hue, shame ...)

Those who do not yet know the fury gnre by Zvex pedals could certainly s'arrter by the saying "what? Three buttons, two volume? Mwarf, a must be zero! " Dtrompez you ... Three buttons, it is enough with Zvex: D

Use ... Can you REALLY use Zvex? Would not it plutt the Zvex pedals that we use? It is believed, but true: I wish you courage and luck to get out the same thing in the BMD of the site!

Always remember to use it with a distortion (saturation First, the machine APRS) since the machine only has a trs's rotten.

As I said, these three buttons seem trivial, but by moving some milimtres, we get things completely DIFFERENT! So hard to use, but since gnial gives an unimaginable number of potential!

However I can understand that some have in quickly tired, so I am not the maximum.

Simply put: you're a fan of Sonic Youth? Mogwai to Godspeed You Black Emperor!? Of all the groups existing noise? The PDAL is for you! This gives her the most noisy of the earth in a snap and even gnial: no breath! The noise is Fully GNR rglages by you on the pedals, and especially your game

As for sound, I personally tried a metal core boss, the seller told me that technically has sounded better with a fuzz, but I found the sound more than adequate. ..

Amateurs of all kinds of noises, your machine!

For if the Zvex pedals for me exprimentales's most powerful moment, they are also the most Chres! (300 euros for each PDAL, on average)

But rest assured, the game is worth it, my opinion is the kind of pedals that are continually discovering Properties.

I am not the maximum because of inconvnients mentioned above, but still the most effect pedals gniale I've ever used!
Did you find this review helpful?yesno
»
Read the 6 user reviews on the Zvex Machine »

See all 15 photos of Zvex Machine »

Zvex Machine manuals and other files

Other Zvex other Guitar Effects

Other names: the machine, themachine, machine u s