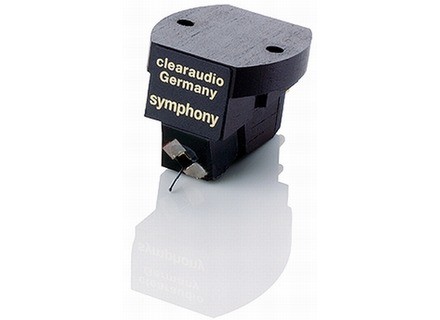 Clearaudio symphoy V2
4
The V2 is a symphony clearaudio MC cell between the high-end, direct competitor of Zyx, Shelter and other Ortofon Cadenza black. Its needle is in Boron and it weighs about 6.5 grams. The ad is compilance 15 trucmachins it ncessite a supporting force of approximately 2.8 grams and gets along well with standard arms, such as Jelco 750d. This cell, wants to receive 300 ohms Impedance, which is 3x more than the current standards. Number of pre-amplifiers phono "embarqus" not rglables, run on 100 ohms. You will thus see if your pr-amp can distribute such impdances, although my experiences tend premires dmontrer that the results are very acceptable with impdances "standard ".dropoff window However, it loses some superb in the treble.

Establishment Bitchy, the cell IAED a little in the last turns of the screw on the arm, forcing revise the rglage until the draison.

In reaching its noise behavior. I find it very difficult to judge a cell. I find the sound DLivre the symphony v2 like so prcis, Detailed with a big concept of liberalism on percussion, strings rub or clips and voice. However, it must hear it does not add or body slam in the bass, but re-translates what is there to do ngligeant any detail. The mdium is trsdtaill too, without being stressed. Acute remains in the registry prcis with soft notes when it closes on the tip. Good depth without being A reference of its kind, VERY nice sound scene. A t particulirement comfortable with symphony orchestras and classical music in general, but, overall, it is a cell that everything fits. Listen essentially rock for me, she demonstrated an imperturbable character. Able to follow even the largest harmonic fly away without having the impression that it is stress by anything.

Cell difficult sell, and, hence, easily found in nightingales. Ngociez tight. For my part, she cot 540 euros. And want no problem comparing with shelter and other ortofon 901 Blue cadenza.
Did you find this review helpful?yesno
»

Clearaudio symphoy V2
4
The V2 is a symphony clearaudio MC cell entry of upscale direct competitor of Zyx, Shelter and other Ortofon Cadenza. The needle is in Boron and weighs approximately 6.5 grams. The compilance trucmachins 15 is announced, it requires a supporting force of approximately 2.8 grams and he gets along well with standard arm, such as the Jelco 750D. This cell wants to receive 300 ohms impedance, which is more than 3x the current standards. Number of phono preamps "embedded" and not adjustable run under 100 ohms. You'll have to see if your pre-amp can deliver such impedances, although my first experience tends to show that the results are very acceptable impedances with "standard". However, you lose a little in superb treble.

Implementation boring, the cell deviates a bit in the last turns of the screw on the arm, forcing him to revisit the setting up of unreason.

To come to his sound behavior. It is very difficult to judge the cell. Because, for me, the sound of a cell also depends on everything that follows and precedes. I find the sound delivered by the symphony v2 as accurate, detailed, with a big notion of realism on percussion, plucked or bowed strings and voices. It should be understood, that she does not add or body slam in the bass, but it re-translated therein without neglecting any detail. The medium is also very detailed, without being put forward. The treble remains in precise register with a sweet note when it closes on the tip. Good depth without being a reference type, VERY nice soundstage. Was particularly comfortable with symphony orchestras and classical music in general, but, overall, it is a cell that fits all. Listened mostly to rock in my hand, it shows a character imperturbable. Able to follow even the largest harmonic flights without having the impression that she is stressed by anything. It sticks to the train game Jimmy Page, means any of the game's slipped. Means the work of breathing Mumpford Marcus and his lips falling off. The cracking of the table harmonic guitar Tracy Chapman. Hat! Great respect!

Cell hard sell, and, hence, easily findable in nightingales. Negotiate tight. For my part, it cost me 540 euros new. And it would easily compare with shelter and other ortofon cadenza 901 Blue.
Did you find this review helpful?yesno
»