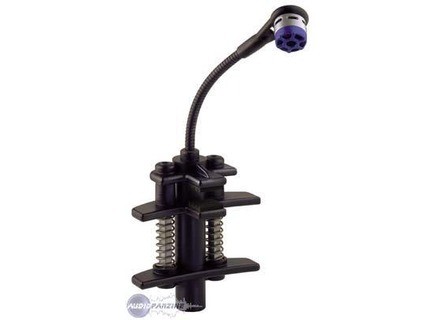 Opus 87, Other Microphone from Beyerdynamic in the OPUS series.

Beyerdynamic Opus 87
5
I have used and seen the Beyer Dynamic Opus 87 on several occasions. Use it on the toms and snares only. I think that it really performs better on the snare for some reason. It just really gives the snare that pop and snap that I love. There have been many bands locally that I have worked with and recorded and used the Beyer Dynamic Opus 87 on and it has done more than what I expected it to do. I really don’t have anything bad to say about this drum mic.

The best thing about it is how clear it will give your recording of the drum. Some drum mics just sound flat out horrible and I don’t suggest trying to purchase a drum mic on a budget. You will get what you pay for and you will need to invest in some Opus 87 mics right away if you want to record some great drums. Like I said it does the snare drum some serious justice with its clarity when recording. The value you get with the Opus 87 from Beyer Dynamic is unreal for the price, not saying that the price is really cheap because compared to a lot of low end drum mics the Opus 87 might seem like it cost a lot. But for the quality you are getting you will over look the price tag forever. After using for a short while you will have long passed the price of the mic. I am very happy that I chose to use the Opus 87 by Beyer Dynamic and continue to use it depending on which studio that I am in . I have many drum mics and this one is one of the better ones by far. You just don’t know how good this mic is until you get it. Buy it.

Thomas Ramone's review (This content has been automatically translated from French)

Beyerdynamic Opus 87
5
Opus 87 is a microphone Condenser instrument used both on stage and in studio. It can clip to attach it to any tom drums and other percussion, and even on some copper.
It may adopt multiple positions while containing the vibrations of the instrument.
Despite its fragile appearance, it is able to resist (although less than a dynamic) to certain shocks.

I use it for some months now and I am fully satisfied. Its strength is its versatility and quality sound immediatly. Against in-part, a little "less" for her fragile appearance!
There is no doubt that an appropriate static always better define the sound that a dynamic compared to a SM 57!
The price / quality ratio is correct!
Note however that through this microphone, I was looking for versatility, and this is the case! Without treatment, one arrives at a very satisfactory result!
I would do so this choice in the same circumstances.
Did you find this review helpful?yesno
»

Truffle's review (This content has been automatically translated from French)

Beyerdynamic Opus 87
4
T says it all and then for those who want more information (in English ...):

I'm trying to build myself a small my little studio and therefore my kit mics.
I am also a drummer and I 20aine concert a year.
Pq I tell? Because I got a little tired of carrying a "big" battery (a DC a GC 5toms 6 1 HH cymbals) for at best I may sound to 1 / 4 components ...
Making heavy rock, it is also difficult to make a correct sound via 4micros (2overheads 1 1 CC GC) because the amps also have their word ...
And even that has never faced the problem t: full of pretty but not enough microphones feet? or not enough microphones at all?

So I wanted both microphones can be used for me live in the studio and whose silent space minimum. Since I am Students in her, my budget is limited and to avoid a dpense for mic stands, it's always a "price". : P

Good good ... talk about bte in itself!

It is true that the microphone is relatively poorly Submitted. A tui package worthy of a necklace and no trace of this "bubble wrap" protector ... "Arf! It looks not so good ..."
Comes to the handling of the microphone. In fact, the clip seems more fragile than the pictures placed on the net is the plastoc 'and not mtal! Re-"Arf!"

For cons, the investment is alone! It's really easier than trying to pass a boom between the two cymbals that overlook this nice little "man" (I can not empcher m ^ ^) which passes not far Acute dj boom of the CC ... And once pinched the orientation of the gooseneck microphone thanks goes like butter too.

Mnt, we set off this little device and we realize that eventually this microphone is not so bad, I would say even gnial. To my battery, eg, I just had that increase a milli the mid-coat to get "the sound that I always rvquot; ...
I do not dnigre Shure and other Sehneiser but I admit that the deep and hot that I wanted appeared here directly. (I arrived qd same with others but with the impression that tjs n'tait still not perfect).
Do not forget a battery evil RULES basic sound as in a micro ...
Qd dsaccorde a guitar is, we want to the microphone, let alone the same ingnieur his right ... I say was as a huh! P

However, 48 V, this microphone is extremely sensitive! It is even worse in 12 V (see link above)
Be careful with drummers dfonceurs-hitters if you do not have attnuateur in your console. The microphone pre-amp with (Intgr the central tube), its sensitivity is increased!
Finally, for a price not too lev available here trs just a microphone at the sound and practice at placement and size!

NB: if you should choose and do not ask him what he can not do!
I read something like a music site ...

Roll's review (This content has been automatically translated from French)

Following the advice read on the forums of this site, I bought 4 opus 87 (1 for tom acute one for the floor tom, one on top of the snare, one on the stamp).

I am satisfied with TRS. I was looking for his trs open, I think be not too far from goal.
A reference to particulire Systm fixing / clip trs super stable and convenient to avoid the purchase of microphones feet (and earn up!). Systm The mounting is compatible with the rims on Gretsch, unlike what I have read on a forum on this site.

If you had said to listen how all sounds almost without mixing, see more at my website (see my profile). Info for beginners as I take her so please bear with me!

Did you find this review helpful?yesno
»
Read the 5 user reviews on the Beyerdynamic Opus 87 »

Other Beyerdynamic other Microphones