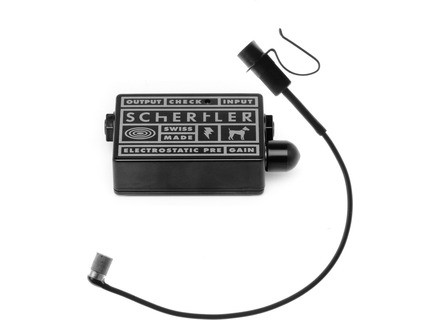 Before buying this microphone I first tried the V DYN Set Schertler model best known. After 1 week of testing in the studio and live, the sound resembles that of a pregnant on which would have removed the tweeter was beautiful sharp increase in the mix, if there was not originally is useless. This mic seems to record a violin that is in another room. The dedicated preamp are changing anything, the DYN Set V will remain for me a great mystery.

But horrified by the piezo pickups, I persevered and gained a STAT V Set. Deliverance. Finally a realistic sound for a violin. PHEW, I think this is the only micro market that deserves this assessment (I tried Shadow and Fishman also means that are very cheap but good ...)

Highlights:
- Rendering. Especially in the studio. This mic is very loyal and Retransmit the exact sound of the violin and it is the most important.
- The fineness of the connector and the cable. It changes other microphones jacks that tilt the violin so they are heavy.


Some negative points though:
- As with any microphone attached easel, he took the brunt of the back and forth archer. (Small "tactical" shooter need to EQ) I thought cork mitigate the phenomenon but no.
- Can not install the microwave without using a luthier (you must cut the shape of the bridge in cork ... easy)
- 2m cable between the microphone and preamp ... Congratulations Swiss p'tits! I 1.86m. How can I move on stage without playing football with my preamp knowing that the violin is not my only instrument and so I can not keep the preamp in a pocket?

In short, apart from these few things, very good product. I recommend.

Other Schertler other Microphones