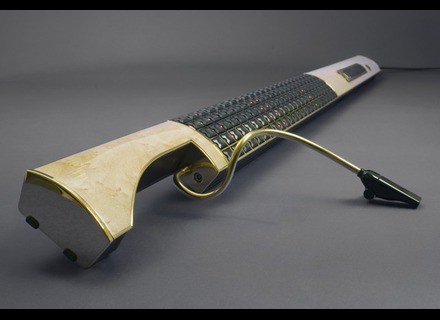 A professional level instrument which allows the musician to play and improvise using a limitless range of sounds with virtuoso skill. The unique design of the keys makes this the most expressive electronic musical instrument ever made. The Alpha can play and record loops, change scale and key, transpose, alter tempo, program beats, create arrangements, switch and layer multiple sounds, all while the musician is performing live on stage.

The Alpha requires a Mac or a Windows computer to run.

What's in the box?
Hardware Specification

You can load and play your own Soundfonts, Audio Unit Plugins and Midi instruments with the Eigenharp Alpha. In addition, the Alpha comes with its own native instruments (at present a software model of a Cello, Clarinet and a Synth engine). The Alpha also ships with a collection of loop libraries and several acclaimed instruments from our partners:

Eigenlabs Eigenharp Alpha
5
If anything was 'perfect' this instrument would have got my vote.

I've had an Alpha since they first became available. While they are able to act as a MIDI controller, they are really a complete instrument by themselves, have several 'internal' sounds and can host virtually any AU or VST.

The Alpha is exquisitely made and is, as a result, expensive. (The Tau is essentially the same and very reasonably priced)

What do I like?
- it is incredibly tactile and expressive, well beyond what MIDI is capable of
- there is total configurability
- one can load multiple AUs/VSTs at the same time and play them simultaneously or sequentially in multiple keygroups
- It has an excellect mic-pre and headphone amp built in
- all information (including mic and in-ear monitors) flows through a single cable (mine is 80Ft long) giving complete freedom of movement
- The ability to configure the instrument and SW has greatly improved and continues to be refreshed

Knowing what I know now:
- if I were buying one now, my only wish would be to have bought earlier at a better price

Other Eigenlabs other MIDI Controllers