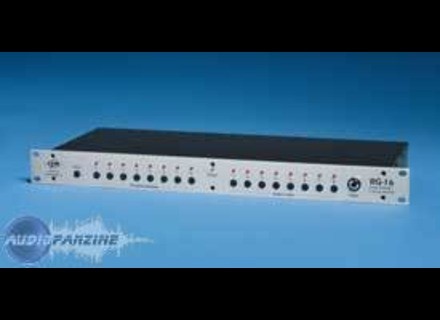 - One buffer that you can use or not. I like its sound, close to the Axess Electronics BS2. The buffer has its own input and output so you can place it anywhere you want in the audio path (before loop 1 or behind loop 6 depending on your pedals).

- 8 loops in total: the first 4 ones are serial loops (only Send/Return per loop), the 4 others are independent which means they have their own inputs and outputs. So you can use the latter to switch four functions. To summarize, you either have 8 audio loops + 8 functions or 4 audio loops + 12 functions, and of course all other possibilities in between.

- 8 functions. Connection via an 8-pin DIN connector. You have two isolated inputs (Amp1 and Amp2) that allow you to use two amps without ground loop problems.

- RJM provides a custom cable and the amp list can be found on the RJM Music website. I made my own cables. I use Amp1 to switch four functions of my Engl preamp and Amp2 to switch one function of another pedal.

Midi In, Thru, Out

Phantom power: the RG-16 can power your Midi footboard if you use a 7-pin Midi cable.

What else do you want? The mix of serial and independent loops is a good idea. The unit provides enough audio loops and functions for most applications! You even have phantom power. What a great manufacturer.

- Regarding PC and CC data, you can choose continuous controller values. In the default setting audio loops are assigned to 80-87 and functions to 88-95. But you can easily edit them.

- Regarding audio loops, you can even switch them in pairs for a stereo application.

- The front panel has one switch (and an LED) to activate each loop and function plus a write button that allows you to store the settings described above, and also to save presets (2 banks with 128 presets each).

I use it only with CC data but the possibility to activate each loop or function is a big advantage (like its daddy, the Rocktron Patchmate).

The buffer sounds fine. You can bypass it or insert wherever you want. Very nice!

The RG-16 is audio "transparent" and the switching is noiseless and instantaneous.

FYI I previously used an Axess GRX-4 and CFX-4 but I needed more possibilities. Axess Electronics is an excellent manufacturer so I was afraid to be disappointed by the RG-16. Famous American rack processor manufacturers use the RG-16 so I thought it can't be bad... and it's true!

I give it 9/10 because the finish is not perfect. It would be nice to have all LEDs in the middle of the unit

RJM's customer support is very good but not as quick as Axess Electronics' (but Mario is unbeatable). Don't forget the name of this brand: RJM Music! The Amp Gizmo, their Midi function switcher is also an amazing product.
Did you find this review helpful?yesno
»