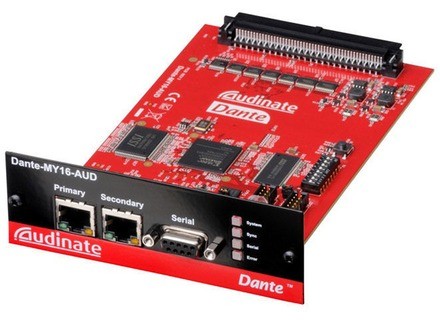 Audinate Dante-MY16-AUD
5
How long you use it?
I use it for a year and a half for the live recording, installed on an LS9-32

What is so special that you love the most, least?
installation and configuration is very simple. when coupled with cubase, there are 16 tracks in / out

Did you tried many other models before buying it?
not, and for good reason, in this price range, there is that this model!!

How would you rate the quality / price?
excellent

With experience, you do again this choice? ...
yes, I plan also to acquire a second to move to 2-track recording.

celeze's review (This content has been automatically translated from French)" Very practical, jadore!"

Audinate Dante-MY16-AUD
5
I installed it on a yamaha 01V96VCM to qualify for the 16 lines simultaneously reaper that I use for my recordings.
no pb config, I could use the license provided by AUDINATE a second PC without problems.
To be quiet, you'd better add an additional gigabyte NIC dedicated to the MY16-AUD, and we keep the network "internet" apart.
Finally, nothing to say, is quite what it says if it is priced a bit high, but I now have a solution for recording live.

Audinate Dante-MY16-AUD
5
I use very recent days, with a DM1000.
I did a mixdown session of 16 runs.
I just recorded two concerts in a row (still 16 runs): impeccable.
Also used with Magix Digital DJ: practical multichannel ASIO interface of this app that also converts "on the fly sample rate of WAV files in 48 kHz CD ...

I also have a Motu 828 Mk III card (for a little over a year).
(Quite a few clicks and a problem with the PC's internal firewire interface, but otherwise good card too ... See my review elsewhere on this map.)

+ Specials:
Well, first the network: the possibility of exchanging audio data between multiple partners ...
The network connection "Standard", compatible with the rest of traffic (and therefore economic), including a single cable with "patch" (for a simple console-PC connection, no need for a network switch)
Config easy.
The quality (no "clicks")
The possibility of a redundant network
The ability to broadcast to multiple recipients simultaneously
The configuration flexibility of the sources / destinations

The -:
The license fee DVS (a pity that it only works if at least one card Dante is available on the network.
In my opinion, at least 2 licenses should be included (laptop + desktop)
The limited number of "migration" possible (and even if you change the network card, it accounted for a migration)
It never worked for me in XP SP3 (see forum, related to network performance or XP disk on this PC recently, so not directly linked to the card or its driver, or a lack of compatibility of the latter with XP)
Do not work in 44.1 (so, for example, to send a WAV file to a CD track to the card, it must convert into the app 48kHz)

Other comments:
Strongly that we can also use the card for Studio Manager (config remote console) ...
Strongly and also that there are more physical interfaces (such as conversion cards ADAT, AES, preamps or Stage boxes etc..

A remake? Now it works, yes, no problem!

Published on 09/12/12
Yamaha announces updates to its Dante-MY16-AUD interface card.