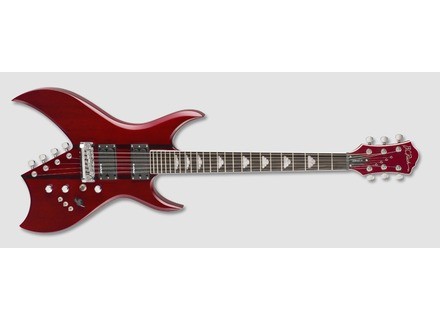 Bich Perfect 10, Other Shape Guitar from B.C. Rich in the Bich series.

All user reviews for the B.C. Rich Bich Perfect 10

B.C. Rich Bich Perfect 10
5
I grew up playing B.C. Rich guitars and always wanted a 10-string. I loved the versatility of the guitar; the fact that you could get 12-string sounds, but still play power chords on the two lower strings, or if you want you can just leave the four extra strings off and have a standard six-string.

My Perfect 10 Bich is a Korean-made neck-through and came with a B.C. Rich molded case, a nice added touch included in the purchase price.

As a 10-string, this guitar has a specialized fixed bridge that accommodates the extra four strings. The action was set up from the factory extremely nice and low, just like I like it--I made no permanent adjustments. The Dragon's Blood finish is flawless and beautiful. The guitar is nice and thin and the neck is wonderfully playable.

Aesthetically, my guitar has all-black pickups instead of the zebra pickups depicted in most pictures of this guitar. The pickups are Rockfield Mafia pickups and work well in all of the pickup and electronics combinations.

The Rockfield Mafia pickups are higher-output pickups and are adjusted farther away from the strings than I would normally adjust them, but I have no complaints. I tried bringing the bridge pickup closer to the strings but didn't like the change in tone, so I put it back.

It's not the easiest to master, with a plethora of controls at your fingertips, but it's well-worth the time investment.

This is really a tone machine in just about every way. The neck-through construction provides awesome sustain and a wonderful feel playing higher on the neck. Clean tones are akin to what a 12-string guitar sounds like, but with a bit more clarity and less muddiness as a result of the bottom two strings not having octave strings. On overdriven and distorted patches chords take on a rich fullness and slightly different tone as the third and fourth strings have the octaves. The result of the first and second strings being doubled just adds more fullness to the tone. Single notes and solos are surprisingly easy to play--one would think it would be a major adjustment to play two strings at a time, but they're so close together it is somewhat imperceptible. As previously mentioned, the guitar affords the flexibility of removing the additional four strings and just running it as a six-string. As far as electronics, each pickup has an individual coil-splitting mini switch and there is a third mini-toggle that is an out-of-phase switch when both pickups are engaged. There is also a five-position Varitone that switches in different capacitor values to brighten or darken the tone in more subtle ways.

The coil-splitting and phase switches are great and it's nice to have them AND the Varitone included in the price. The bridge pickup is nice and cutting both clean and overdriven--the neck pickup is warm without being muddy. When the coils are split, nice strat-type tones are easily achieved. Although the phase switch obviously only works with both pickups engaged, the sound is nice old-style Brian May. Overall an EXTREMELY versatile guitar.

I've thought of changing out the pickups multiple times, but then I play the guitar and decide against it.

I found it hard to find any fault with this guitar. If I HAD to call out something it would be that the guitar showed up missing one of the bridge saddle height adjustment screws--I called the vendor and they had BC Rich send out a replacement set of screws quickly. Very happy with the support.

This guitar is the best of both worlds between a 12-string and a 6-string. Twelve-string guitars tend to be bigger or bulky and the Perfect 10 Bich exhibits none of those traits. This is a rocker at it's core.

Since I've never seen another 10-string it's hard to say if I'd buy a different one. If you need flexibility and don't want to shoulder an SG double-neck I strongly recommend you pick up a Perfect 10 Bich and expand your horizons.