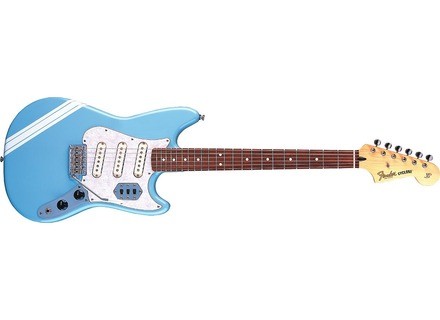 Deluxe Cyclone II, Other Shape Guitar from Fender in the Cyclone series.

The Pickup switches are the only thing I don't like on this thing. They're in a bad location and I think a toggle switch would be more practical.

I've only had it a few months, but i've had no problems with the quality yet.

Great buy. If I lost it or something, I would definitely buy a new one. As I said...the pickup switches are the only complaint.

Fender Deluxe Cyclone II
5
The Fender Cyclone II was made in Mexico. It is equipped with 22 fret strat scale neck, 3 jaguar single coil pickups with independent on/off controls, a Standard fender vibrato bridge with tremolo, 1 volume, 1 tone which, when, combined with the single coils, it is sufficient. It would be nice to have independent tone controls for each pickup, but, of course, adding that pushes it closer to a jaguar.

The neck is just right, a standard strat scale and has a jazzmaster style headstock.
the last frets are pretty easily accessed, and there is little fret buzz, but of course, most fenders are subject to that. Im sure if it were professionally set up, this guitar would shine brighter than it already does, but the factory set up is sufficient.

It is good for any music style really, I dont have a specific style myself, I just play various &quot;rock&quot; styles. I've used it through a line 6 flextone II which it sounded immaculate, a marshall MD-50, A randall 100-sc, and various other amps. It doesn't disappoint.
The guitar accurately displays the attempt that the amps and effects attempt to model. Of course the amp is more effective in the equilization, but the sound is very crisp and clean, no detonation. I enjoy gritty blues, but also smooth jazz, and, of course, some dirty, grungy sounds, and the Cyclone II helps me achieve those sounds.

I have been playing this guitar for 4 years. I love the appearance, the playability, and the overall, ease of use, I had to turn the pickup switches around because they are easily turned off when strumming if you dont and that was annoying... now the switches are backwards. I love pulling out my unique guitar around other guitar enthusiasts because it's always something they've never seen, let alone, heard of. the price was that of a midrange guitar, I paid $500 for it new. Of course, I talked the dealer down a bit. I would buy another of these guitars if I had the money. I would like to mod one eventually, but, at this point, I dont want to make any mistakes.
Did you find this review helpful?yesno
»

Alcorine's review (This content has been automatically translated from French)

Trs enjoyable handle roughly the ergonomics of a layer if it is the body type mustang smaller. The violin is worthy of a Fender Mexico is - say ok but a tone below the USD.

Résumé for this guitar: Start with a body mustang (not the handle short-scale) or a jaguar with microphones strat is depending on your point of view. The main intrtrside in prsence of switches that allow more than one strat combinations: acute micro / micro serious or 3 microphones in addition to both traditional combinations acute mdium +, m dium + severe. For my part, only the combination acute / grave seemed truly innovative, the three microphones at the same time add too mdium ...

I tried it in the store, I look the type apprci mustang competition, the strat familiaris and some new sounds. For me it is a strat refreshed affordable price (750 euros), for it was not against the personality of a jaguar or mustang believe me, I plan on t really, it does not have any Designed to Manir