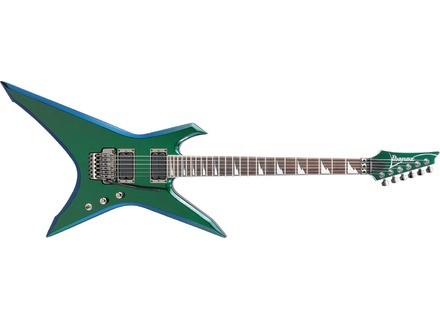 XPT700, Other Shape Guitar from Ibanez in the Xiphos series.

bfred's review (This content has been automatically translated from French)

Ibanez XPT700
5
Mtalleux a great guitar with a bunch of crazy characteristics.
-24 Frets
-quip the all-new D-Activator Dimarzio in the bridge and neck
-System Tremolo Edge 3
-Manche Neck thru so great Sustain
-Superb Color Red Chamlon that changes from red to orange to green

-ct Handle any problem is to bomb pure wholesale tat is the good old Ibanez 24 frets is very accesible since the horn leaves enough space for the fingers .dropoff window
-It's Not really a heavy guitar for guitar Mahogany
-The Form cracks me up because it is a small copy of the Jackson Warrior but the color is a standard for Xyphos

-I Believe that this guitar is made for me since it is made for mtalleux and the form will agree not to Blues.
-I Play with a Marshall MG100HDFX and gain increased thanks to the power of D-Activator picks ups and I believe that my Crate Blue Voodoo will in benefits.
-The Sound is rather well dcouper with the large distortions and EVERY Notes resortent well dtaillbr /> -In short, all sounds that is for the bridge pickup or the neck pickup are really high caliber.

I only used in store and it remains for me only has conomiser and I'll get me. This guitar is new for Ibanez, and it's really managed to extra sounds are the model out of the ordinary Chez Ibanez.
I try a lot of guitar in my life and I believe that this is a guitar that I was most pater with its color model and its sonority handle.
For the price only $ 940 Canadian (sorry I think it's nothing because when I buy my ibanez prestige of the year 2006, he did me a $ 1650 Canadian (red soil so now I wonder what because it is so chre.
In short it is a bomb and it still awaits me in pretty shops
Did you find this review helpful?yesno
»

zicopilote's review (This content has been automatically translated from French)

Very good quality / price / look for metalheads loving slap sounds, without pushing to the extreme as EMG active D-Activator are among the best passive.

A thousand times yes I remake this choice.

V old man on the hill's review (This content has been automatically translated from French)" In a closed world to infinite universe."

Ibanez XPT700
4
The swordtails is manufactured in Indonesia under the eyes require the Japanese parent.
The vibrato is an Ibanez Edge III (cut the cords side scoops, not glop)
The neck-through a wizard III 24 cases with complete access.
Mics of origins, D Di marzio activator (my model has a kit EMG 60/81).
One volume, one tone and a 3 position switch togle.

Here we are back in the world of subjectivity. Well it has taken a hit. For I come from the world of pop rock or vintage guitars and classical forms part of the dress code imposed by this style. If I remain an old fart as a bassist, guitarist asleep inside of me decided to get a big kick in the ass, leaving aside Les Paul and TVs, to finally take a step forward towards more lutheries techniques that I was not expected to evolve.
The extreme form of swordtails with its impeccable painted chameleon green / blue me baffled. And this guitar seemed to insult all my values. My main fear concerned the handle and ultra modern flat profile usually inappropriate for fans of vintage. But strangely reassuring thick painted fan of Gibson and I am such access does not really refuse. The gameplay is complete, all doors and dogmas éclat.D fly in a closed world to infinite universe.

Style who cares only the music matters. Why deprive instruments exceptional playability optimal, why?
These brands Ibanez, Jackson, EMG, Tama, Mxr, digitech respect nothing and assume to make mistakes the son of time. And that's how things have evolved without my assistance. But the guardian of the temple has retired and I frantically shrede as to make up for lost time.

In summary I recommend has all the metalheads to test green yellow red Stratocasters, and especially to other daring move on marble in the history of the electric violin. Under the paving stones the beach.

ekerisann's review (This content has been automatically translated from French)

One volume knob, one tone and 3-position selector type Gibson

The handle is a real highway, one would walk with ease is a treat and this until the 24th case since the driver allows us to handle here ACCS ais treble at all times!
As for the weight of the guitar I would say it is standard, especially for a guitar of this form but it is true that as many guitars in extravagant forms she leans forward, compensating with a good strap on!
But it makes up for the fact that despite its form, the game is sitting ais whether in playing position type flying (right knee in the mid-points) or horizontally strat avecune good old form '! (Basically I rejected the forms and their discomfort sitting at stake here, no worries)
Small BMOL, sitting horizontally, you must carefully place the floyd to use it ...
Finally talk about the floyd, simple operation, it seems very robust and responds well, trs parameter it keeps well even after the agreement to nag my shots I just had a slightly move the jumpers after a week and WAS vriament yet to quibble!

This guitar is well suited my style which is the metal in all these genres, but particularly the thrash / black, because the D Activator pickups have the power of assets but with the dynamics and precision of passive, high gain is to go you sustain as well as the palm-mutes and send potatoes without worries!
In dpart I tested the combo Valveking shop and I fell in love since I have I play on my twice Valveking body and with my GT8 branch of a combo Behringer shabby and in both cases it sounds! I lowered the gain around for a better balance when I won precision and sustain, what I expected ...
We can get a lot of sounds with it is versatile trs, already the clear sound is wonderful for me because gnreux in low but on micro easel can get a clear slamming carefree, microphones respond perfectly the attack of true happiness!
For distortion so is even, the good little riffs nags at rock riffs way up to see Coldplay (sub-gain) this machine is doing very well but obviously as its shape suggests the rock pushed and mtal are its strengths (but still clean trs trs beautiful!)

I use it now for just over two weeks and I do not really regret this purchase, I found my guitar for a long time and I see her come with me a long time because it is full of resources!
I love the aesthetics, the form such as painting Camaeleon unique and its a low gnreux prcis both powerful and
I have a jou LTD MH-400 (I should have to buy a place) and for me it does not compete, I jou on the high end as Gibson Les Paul Standard so I visualizes main points of a skyscraper, but precisely what its full of low precision and reminded me of the Les Paul so in the meantime I think I found my happiness!
The report qualitprix trs is good because these characteristics with floyd and microphones for the price is reasonable! In addition Ibanez offers the hard case with well made!

This choice I would do it every day

Did you find this review helpful?yesno
»
Read the 7 user reviews on the Ibanez XPT700 »