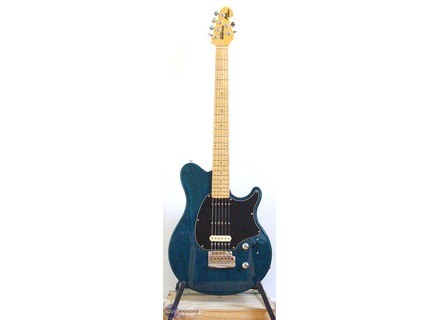 Music Man Axis Sport HSS
5
I will not dwell too much in my opinion, because it is a variation of my favorite guitar for which I have already given a detailed notice (Axis Sport). It was therefore a derivative of the Axis / EVH with a swamp ash body (a coin in my case), neck (and key) maple, with musicman vintage tremolo, a custom di Marzio (same as on models Axis) and are two single coils. The handle incorporates Profile EVH, a must in terms of comfort.

HSS models that exist during production with pickguard, 3 years ago, and this model is rather difficult to find.

This is the most comfortable handle on the market for my taste, but as with all music man, it is narrower than average (41mm at nut) and round profile asymmetric (as in Axis, Wolfgang, etc.). . It will therefore be necessary for small hands. Nevertheless, the national average (1m75), with hands not particularly sensitive, I feel perfectly at ease, for plans for the blues as more technical plans. But overall it&#39;s a handle blues, rock and more.

The guitar is light, well balanced (tends to be horizontal, so for fans of slash ... sorry!), Controls well placed and the access to the truss rods (short in the body) will allow you to settings less tedious (no disassembly of strings each).

Question acastillage, good quality, however, that the lottery with a little vibrato (as for luke ago). One of my orange axis is not great, I have tightened, which would also provide an extra ordinary sound (admittedly a little rough) much better than fixed bridge base (not worth the hardtails the blow in my opinion). One of my blue is no less extraordinary: I can give Klitschko a large number of dive bombing tremolo or Dante to Blackmore, AC is given (you can check on my myspace videos) as well as a floyd!

The axis is a sport EVH ultra versatile in its configuration of pickups, controls, and bridge.

Versatility does not mean less character. It is a rock guitar that allows to move from country to blues, blues rock, rock to hard rock (obviously sounds van haleniens are too), and can also do jazz. She has an incredible presence in the mix, and she managed to achieve unanimity among my friends (not fundamentalist, but almost) blues, jazz and rock musician shredder. I NEVER use it for recording solos and primarily rhythmic.

As this guitar is very balanced and sensitive to the nuances, you can plug directly into the amp and alternate solos and rhythmic without gadgets. At the Van Halen what.

The simple are a bit below my taste, I&#39;ve changed. There is more in line with the superstrate true Start sound, and therefore more suitable for modern sounds as pure vintage. It can stroll into the world of blues without worry, but you do not necessarily find a little trick Kenny Wayne Shepherd or SRV, it sounds cleaner. That said, I blocked the tremolo which gives a more rigid, probably with a standard adjustment, approaching it more, but the body remains in swamp ash, so ... In short, alder, it would have been monumental!

I have owned about thirty electrical (a dozen fender, gibson of, prs standard 22, Music Man Luke II, Shecter USA, etc.). In today my arsenal consists of 4 electrical: one the paul standard and ... I stopped on 5 axis (3 sports, 1 Super Sport Piezo, 1 olp floyd amended).

For each concert, each plan, I am systematically axis sport, I use my "number one" for 5 years (already refrettage the meter is telling you). Do I really said that I wish I could redo this choice without hesitation? In fact I watch any sport axis (if you&#39;re a seller ...). So, to relieve my beautiful and varied pleasures I have acquired 2 more sport axis, rosewood fingerboard (see my photos page, just missing my sunburst)

This model is rare opportunity, since he had little success (less than the super sports anyway). Know that early career, this guitar was sold approximately 11,000 F (so about 1650 euro rate observed in 1998: https://www.judge-fredd.fr/spip.php?article239)
Personally, I paid it 1200 euros on an auction site, in a New York department store, new (an unsold). Knowing that she was no longer sold after 2002, the price has been lowered.
In short, this model is not collectible, and less than a Fender Start asked the same range, the bargain price is usually below 1000 euros (or even well below the U.S.)

You can consider the alternative of a superstrate with a character all its own, very distinct, but adaptable to many registry.