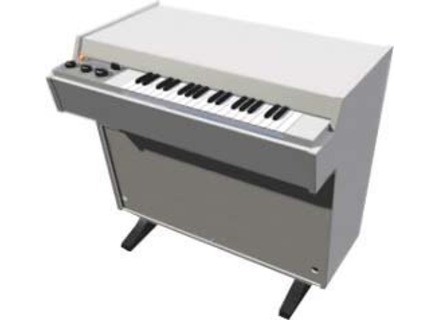 Mark VI, Other Synthesizer from Mellotron.

Mellotron Mark VI
5
The Mellotron Mark VI is the most up to date version of this classic analog keyboard. For those who don't know, the Mellotron was the first keyboard instrument to sample real instrument sounds and have them playback using tape loops and a traditional keyboard. You can switch out the tapes on this one, giving you an endless variety of different Mellotron tones. The Mark VI is the one that has been made for the longest amount of time and continues to be in production. It was the first Mellotron that was remade and is essentially an M400 model if you're comparing it to original Mellotrons. Of course they don't make too many of them as they are very expensive. The keyboard is fully polyphonic...

The configuration of the Mellotron Mark VI isn't too difficult to follow at all. There are three settings to choose from on here (labeled A, B and C), which correspond to strings, choir, and flutes, depending on what reel you have in there. It gives you general parameters for tone, volume, and pitch, the latter for adjusting the tuning essentially. It also has either a low or high speed switch which changes the speed of the tapes. I don't know anything about the manual for the Mellotron Mark VI...

The sound of the Mellotron Mark VI is absolutely that of a real live Mellotron. This isn't a less than the original reissue or anything of the like - it's the real deal. All of the sounds are awesome in their own way, as it's a totally unique instrument that was really ahead of it's time. You can get software emulations of these sorts of sounds, but there's definitely nothing like the real thing. Mellotrons were used all the time in the 60's and 70's, often to replace studio musicians, but now it's almost solely used to get that classic Mellotron sound...

The Mellotron Mark VI is really your best bet for owning a working Mellotron in the present day. There are certainly some original Mellotrons out there, but they're incredibly rare and I would imagine that many of them have issues. Since the Mark VI is so new, it's a pristine version of this classic keyboard. It's certainly expensive, but if you've got a professional studio where you want to have every vintage keyboard available, it's great to know that there's an option out there in the Mellotron Mark VI. This is truly a spectacular instrument!
Did you find this review helpful?yesno
»

Other Mellotron other Synthesizers