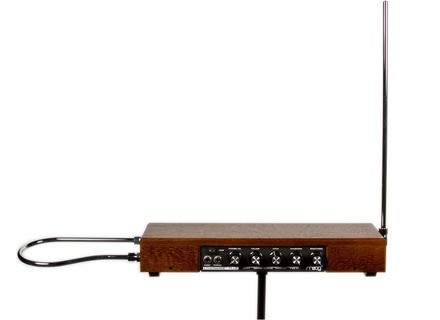 Moog Music Etherwave Theremin Standard
5
The Moog Music Theremin Etherwave is one of the best theremins money can buy. Not too many companies make theremins, and Moog is definitley the biggest company that makes them. It has both a volume and pitch rod and has outputs to send it to an amplifier. It has a few different parameters that can change your tone including ones for pitch, volume, waveform and brightness.

This theremine is incredibly easy to use and it is easy to get a good sound out of it. The controls allow for a good deal of variety in terms of the sound you can make and it is easy to explore what it can do. I don't have a manual for this but it is easy enough to use that I didn't need it.

The overall sound quality of this theremin is great and is one of the best theremins I have heard. You can get a variety of sounds on this, while on most theremins you can probably only get one tone. If you know what you are doing with a theremin, you can definitley get a full sound out of this. While I admit that I am a sucker for both Moog products and the theremin as an instrument, this is truly built well and has a great tone quality.

I first used this theremin about four years ago. I got really interested in the sound these make and wanted to explore it for myself. I have found that while not as cheap as a home made theremin, this is a high quality product with a variety of options. Having both the volume and pitch rod is really cool as it allows for further experimentation. The only other theremin out there that is better than this is the Etherwave Pro, but that will cost you three times the amount this will! While this isn't all that cheap for those just looking to play around, if you are really interested it is probably worth it because of the rich tone and the variety of controls that are present.
Did you find this review helpful?yesno
»

Doctor Feelgood's review (This content has been automatically translated from French)" Simple but moog oscillator!"

Moog Music Etherwave Theremin Standard
5
Theremin, ie one that can be tilt oriented sawtooth or square.

Like all Theremins it is not super easy to learn but against level ergonomics and trimmings, Moog has thought the trick.

This is a Moog oscillator and it shows. In any case much better than all that cheap theremin can be found.

Clearly it's worth it to have this type of instrument for Moog theremin perfectly redesigned the original and has developed a great tool without any frills. Typically the instrument that will be searched in 10, 20, 30 years.

Chris.angel's review (This content has been automatically translated from French)

Moog Music Etherwave Theremin Standard
5
The Moog Etherwave is a reprint of the famous Theremin, an early electronic instruments.

This is a 100% analog instrument (changes are also possible and even presented in the documentation of the manufacturer). It has 4 knobs (see below), a mono audio output and a connection type for the former DIN transformer (not universal).

The case, quite impossible, is black lacquered wood. Antennas, removable and fixed with nuts, are elegant in their chrome.

This model does not have MIDI.

In general, it comes with two video tapes useful.

The Theremin is an instrument in itself!

No way to say we'll make music by moving their hands in all directions after 1 hour of use. NO! It requires some learning, real learning. You move the right hand of a hair of a millimeter and you're next to the note. Worse than a violin

IT CAN BE USED addition of the instrument, its settings are very simple: one button for volume, one for pitch, one for the waveform and one for the tone (brightness). The latter two knobs are however not very effective. The waveform varies too significantly, the starting of the sinusoid, we approach the square without actually reaching it. In addition, the tone does not play its role more or less depending on the waveform (which is also logical).

Found with this instrument, the warmth of analog sound. Logic! Since this is such an instrument.

As noted above, the buttons do not have a drastic effect on the wave. It is sufficient enough to make subtle changes and adapt to the frequencies of other instruments for a better presence.

However, the sound of the Etherwave approach really that of the original Theremin. Beautiful, clear, warm. It is even more of a pleasure as it uitiliser Quer sending in different effects and simulators.

I fell, I confess!

I love this instrument, unique in its kind ... the instrument that puts the player (read: one that is currently using it) in the heart of the sound space. The music that emerges is the invisible, non-palpable. It is resent to arise in the soul of his musician.

After this note spiritually as subjective as constructive, let's get serious. As stated above: The Theremin is an instrument in itself that requires real learning. Although I have acquired in order to create sound and visual effects for concerts, just for that, it already implies a handling serious and rigorous.

But what a pleasure to use, drag the note to hear in the air as and when our hands are traveling in space! This instrument creates an inimitable pleasure to play!

9703michel's review (This content has been automatically translated from French)

Moog Music Etherwave Theremin Standard
5
What is your gift to me that day!
it is a beautiful object of curiosities I got a kit upstream, very simple to assemble.

It is a difficult instrument to play trs, but with a little patience and ears, we come to do great things. Of course it takes of the ear, not the instrument n'tant tempra.
In my case I use it in classical music, I master a few titles. I had a great time making me accompany my piano accompaniments numrique via midi.

Similar to the musical saw, it has the sound of Thrmin is undeniable! Let's play with the pots to get closer to what you seek. It's going to "bulk" of the cello has the musical saw, from no human voice, or the cat's throat after vidos, we just find the sound of the theremin clara rockemore to rule it a little like a cello, or that of Lidya Kavina that looks more like a musical saw (his most deaf). Unlike chris angel, I find it easy to vary the sound with the last 2 pots.

Great "toy" for pater friends, even at attention when not abused, at risk of earthquake, and to RVer night. If you become a virtuoso (as in the video that came with) you can do begins CF career, there are indeed some good thereminist trs!

Did you find this review helpful?yesno
»
Read the 7 user reviews on the Moog Music Etherwave Theremin Standard »

Other Moog Music other Synthesizers