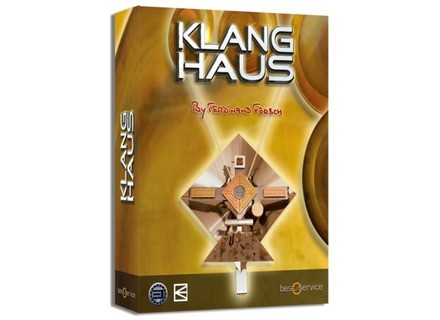 Vt678828's review (This content has been automatically translated from French)" Not bad, but ..."

Klanghaus for me is mainly a set of unusual percussion, especially to replace conventional drum kits percussion sounds by special or crazy. Some sounds bizarre effects can also be used occasionally.
But the problem, Klanghaus instruments were originally created for both visual and sound shows. Reduce these instruments to sample libraries, so do not keep the audio, is to screw up a good part of their purpose and interest. The concept and Klanghaus instruments are great, the result of the implementation in the sample banks is much less ...

Unconvincing in a mix
One of the problems is that many Klanghaus instruments, when inserted into a mix more or less responsible, lose part of their charm, their grain (normal part of their frequencies are hot by the environment) and thus is these instruments lose much of their interest or they are difficult to identify in the mix (what is this kind of background noise you hear in the background?). Some percussion in its complex, interesting when played in isolation, even flank the mess once incorporated into a mix (ringing, resonance). Other instruments have been designed especially for the sight gag, but have no interest in listening only. This is for example the case of the set of trowels played with a bow. Question sound, it was a crappy ersatz violin but one wonders how the situation could advantageously replace trowels violins or cellos? The idea of ​​playing with trowels bow is nice, yes, but in practice, I use it when?

Very incomplete
Another weakness of the thing, this is a house Klanghaus sounds when many widgets are missing. There are steel drums and scrap of all kinds, played with sticks or bow, but there is not all that good brol small shack to sounds should contain, as bottles, stones, pots, cutlery , wooden boxes, plastic, cardboard ... You will not find small percussion hits soft fingers or rubbed ... In short, everything that could be a nice small percussion composed for intimate missing.

Other than that, it can be used ... Sometimes ...
Finally, it may Klanghaus mainly used in compounds which are needed but noisy percussion atypical (for the intimate, must look elsewhere), in which the instruments Klanghaus orchestrations are highlighted (orchestrations loaded, s' abstain) and other than that ... For sound effects, probably ...
In short, for me, Best Service Klanghaus is rather disappointing. The idea is nice, however, the instruments made by craftsmen are great, but transpose sample banks instruments to the original visual entertainment, it does not necessarily something convincing.
Did you find this review helpful?yesno
»

Listen to the 13 audio files about Best Service Klanghaus »