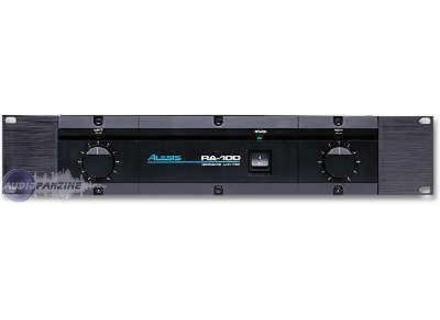 Alesis RA-100
4
The Alesis RA-100 is a stereo power amplifier for powering up passive monitors. This is a really simple piece of gear, and is one of necessity if you have monitors that don't have a built in amplifier in them. A studio that I used to work at had one of these to power up the Yamaha NS-10's we had. Like the name suggests, it's got up to 100 watts of power available. It has 1/4" connections for both input and output for each of the two channels, but it also has speaker cable outputs. It will take up about three spaces in a traditional rack casing, but we kept it on the side behind the console and out of the way, as it's not like you're going to need to adjust it unless you switching out different monitors or something. Each of the two channels just has it's own volume leveler, which we would keep all the way up and adjust on the console. That's pretty much all of the characteristics that are relevant with the RA-100. It should be able to give enough juice to most forms of passive monitors, but I haven't used it with anything other than a set of Yamaha NS-10's, so I can't say this from experience. It's certainly an adequate power system as it sounds good and gets the job done, although I can't say I notice a difference between this and other power amplifiers with NS-10's. If you can find one of these, the Alesis RA-10 should be pretty cheap and would definitely be a nice budget power amplifier to pick up if you needed one. So while the Alesis RA-100 will get the job done for sure, it's not a power amplifier to really write home about, it will simply do the job at hand no better or worse than most other power amplifiers out there...
Did you find this review helpful?yesno
»

tomson35350's review (This content has been automatically translated from French)" nice but ..."

Alesis RA-100
4
I use it for 1 year, I was on powered speakers, so we can say that this is my first real amp, but I've tried the A100, of Crest, Amcron, if I work with Nexo , L acoustics, D & B, so not really the same category.
For the price this is a great investment in a home studio setting, it's pretty clear ... it does its job as a beast power amp.
The only problem is the premature wear of a condo which induced an overload in the circuit, resulting in a large "Pok" every time I put the lamp out the amp, after several attempted solutions, I told him stuck a mute and talk about it more. Why not have changed the condo ... Because.
I bought okaz with Alesis Monitor studio MK1 that go with it for 150 € seems to me and I am very satisfied, if I change it will be for NS10, or Tannoy.

ahura-mazda's review (This content has been automatically translated from French)

Alesis RA-100
4
Good value for money. Used with Alesis speakers. The sound is too hifi for my taste but it's personal.
Since then I went on with the Yamaha NS10 amp that goes with it. I find the sound of Yam much less flattering and more accurate. I prefer to work, especially voice. It is a matter of taste.
However, this is a good first investment quality / price ratio for the home studio.

*kalis*'s review (This content has been automatically translated from French)

Did you find this review helpful?yesno
»
Read the 9 user reviews on the Alesis RA-100 »

Alesis RA-100 manuals and other files