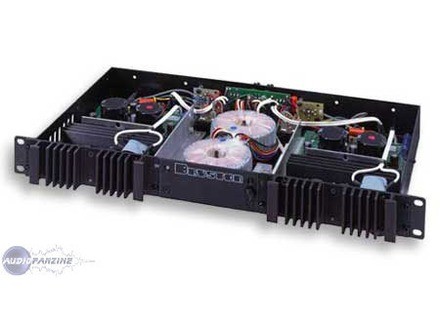 2B LP, Monitor/Speaker Amplifier from Bryston.

Bryston 2B LP
5
The Bryston 2B LP is a stereo power amplifier that I have used in the recording studio to power up a set of passive monitors. This is a pretty powerful amp, but isn't overbearing - it's got 60 watts per channel at 8 ohms and will fit in a single space in a rack casing. I'm unsure what type of connections it has since it was already connected and ready to go in the professional studio where I used it, and there really wasn't any reason to get back there and switch connections or anything like that. It does have a ground lift switch on it, which I didn't need to use. The amp does seem to be built extremely well, and built to last as well. I think that as long as you don't bring it around too much and treat it right, that this is an power amp that could last a seriously long time. The speakers that I used the Bryston 2B LPs were a set of passive Tannoy monitors, and it did a perfect job of getting power to them. We didn't have the levels up the entire way, and didn't really want to find out what would happen if we did! The studio had them preset to the amount that they usually do and that they had experimented with, do I didn't see a reason to mess with that at all. Bryston has built up a pretty good reputation over the years, and if I'm not mistaken they have been around for a pretty good amount of time. I haven't used all that many other models made by Bryston, although I have used one or two. It's hard to say if this was the best one that I've used without trying them all out with the same monitors in the same room, etc. Either way, in the space that I did use the 2B LP, it was flawless in it's performance and didn't present any issues. While there are a lot of different stereo power amps to choose from, if you're looking for a mid level priced one that packs the sound of those more expensive than itself, the Bryston 2B LP is definitely something worth checking out.
Did you find this review helpful?yesno
»